A German Admiral Resigns: Here Are Some Geopolitical Inferences And Implications 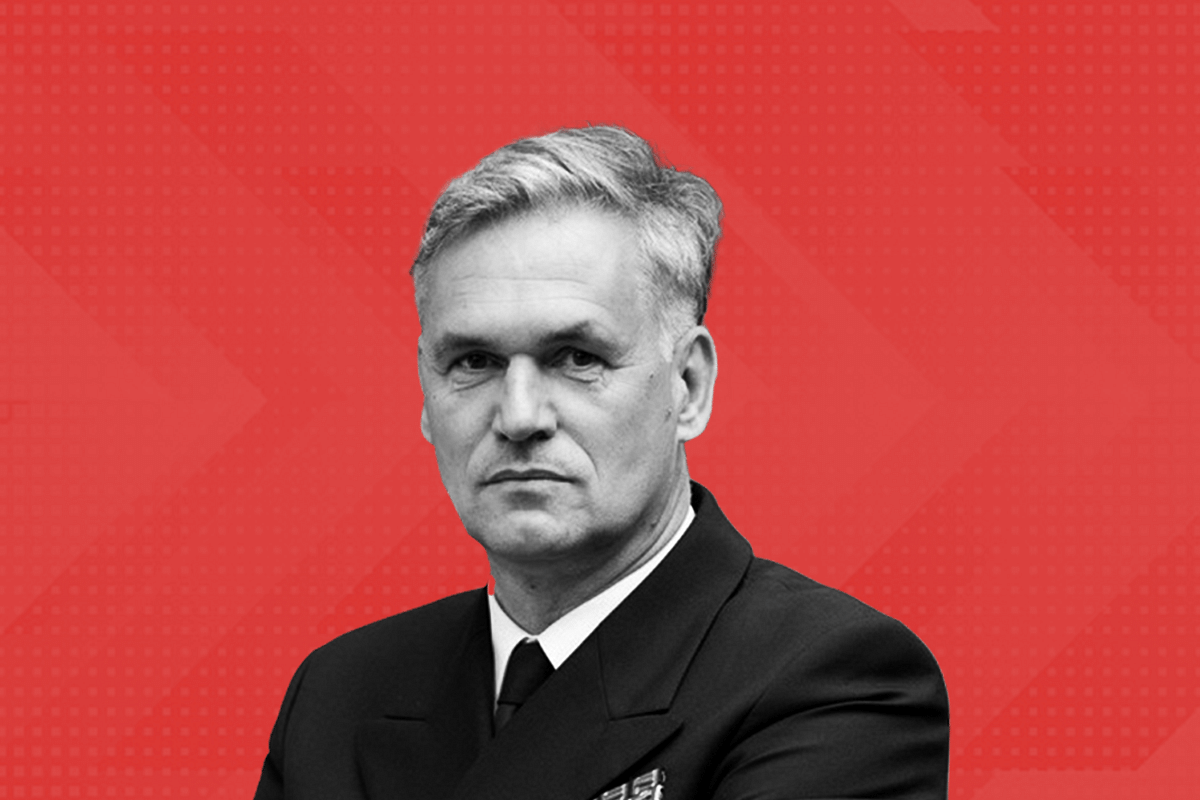 Five months ago, when America and NATO abruptly withdrew from Afghanistan, after a fruitless, clueless, counter-productive, two-decade long ‘Global War on Terror’, and Kabul fell to the Taliban, Swarajya noted that this politico-military disaster marked the end of a long, withering, post-Cold War phase in American foreign policy.

The piece also bluntly predicted that the Americans would try and surmount this latest debacle, not by redrafting policies, but by raising a new hate object, and a new topic: ‘It might be Iran, China, Russia, or someone new’.

In the end, their choice fell on Russia, for domestic reasons. This was President Biden’s great gamble of November 2021: to somehow reduce the international oil price, so that record, energy-cost-driven inflation in America could be curbed through lower gasoline prices.

His first attempt involved the release of miniscule volumes of strategic oil reserves onto the market, to competitively coerce Russia and OPEC into reducing prices. The gambit flopped spectacularly (as foreseen by Swarajya here), and the international price rose instead to painful levels.

Jilted thus, and with inflation still rising, Biden’s response was to turn the screws on Russia, over Ukraine, in a classic ‘Wag the Dog’ move (if you can’t solve the problem, then divert public attention elsewhere).

Very soon, media frenzy ensured that Russia was now recast as the official villain-du-jour. A fresh Omicron wave of the Wuhan virus pandemic was forgotten. China, and the global threats it poses, were swiftly shunted to the sidelines. And in true, Jailor Asrani style, Biden threatened Moscow with dire consequences if Russian troops ever dared to invade Ukraine.

Unfortunately, this rash posturing has ended up driving a deep cleft into NATO, because the last thing Western Europe needs right now is bad ties with Russia, and a fearsome resurrection of a grave threat from their east. It also brings out an extreme disconnect between American foreign policy on the one hand, that of NATO member states on the other, Europe’s perceptions of American military capabilities, questions of European strategy and security, and a more fundamental one on whether Russia is a threat or not.

And that house of cards came crashing down in New Delhi of all places, when the head of the German Navy, Vice Admiral Kay-Achim Schönbach, had to resign after his talk on 21 January 2022 at the Manohar Parrikar Institute of Defense Studies and Analysis (IDSA).

What did the Admiral say, which riled NATO and America so much? (His motivations, for saying what he said, have triggered numerous interpretations, but they may be set aside here, since they do not really impinge upon the inferences and implications).

First, he candidly admitted that an aggressive expansion of NATO farther and farther to the east, beyond the Balkans, to the extent of trying to bag Ukraine or Georgia, wasn’t smart (his exact word).

Second, he said that eligibility for NATO membership doesn’t automatically mean a need to pursue membership. It was a way of saying that encircling Russia, as America had tried with Ukraine and Georgia, will evoke a nasty Russian response.

Fourth, therefore, casting Moscow as the bogeyman would only push Russia closer to China. This did no good to the West’s ongoing, necessary efforts to meet the actual, greater global threat posed by the rise of China. Direct quote: “We, Germany and India, need Russia against China”.

Fifth, Russia’s reclamation of Crimea and the Donbas regions from Ukraine was a truth the world had better accept, since no power would be able to reverse it.

Sixth, most importantly, he asked if it really was that difficult for the West to give Putin what he deserved: respect. Direct quote: “…and, my God, giving him some respect is low cost…even no cost”. If they didn’t, and instead persisted in portraying Putin as the enemy, then he would apply tremendous pressure, like he has in Ukraine, and split the West “…because he can do it”.

And seventh, he coyly admitted that some of his political leaders might have misjudged the true nature of China’s rise; they realised, perhaps far too late, that it was not as ‘nice’ a country as they had thought. Full marks for that euphemistic effort, but criticising his leadership’s judgment skills, in public, was surely a sally too far for a military officer.

Vice Admiral Schönbach did not address two key points – American aims over the past decade to encircle Russia with a nuclear missile shield, which is what led to the erosion of ties with Russia; and the flagrant American efforts of 2014 in Ukraine, when they tried to instigate a pro-West regime change through a colour revolution, which lies at the root of the present imbroglio.

Nonetheless, what do his words mean?

At its most elemental, Schönbach’s exasperated outpourings in New Delhi reflect a deep, legitimate, institutional, pan-European anxiety, on America’s competence to lead the West in the right direction, while keeping Europe’s interests at the fore.

Second, it underlines a significant divergence between American foreign policy and the national security interests of Europe’s older NATO member states. Picking a fight with Putin, over an issue concocted by America, where Europe would be piggy in the middle, for no valid strategic reason, and taking China off the hook in the process, is evidently giving Europe’s top military brass sleepless nights – especially since this is a fight they know they can’t win.

Third, it is an overdue admission that, in fact, Russia doesn’t pose an existential threat to Europe (or to America, for that matter). Ergo, this American need for a new baddie is now beginning to hurt Europe’s security and economy.

Also, readers mustn’t forget that the Americans finally lifted sanctions on Nord Stream-2 in May 2021 (a major, new gas pipeline from Russia to Europe; see here for detailed geopolitical analysis and background). From that conviviality to threatening tones, in six short months, marks a major American u-turn, a contradiction, and to knee-jerk policy making, all of which is driving Western Europe round the bend.

Fourth, it comprehensively busts the media narrative of a big, bad Russian bear, and instead, paints America as a reckless expansionist who will stay on this fatal course at Europe’s cost.

Fifth, it replaces focus on where the Occident’s main global threat lies – China. Whether that focus will be re-adopted and maintained by the West, or not, is, of course, another matter altogether.

Sixth, it unequivocally admits that Ukraine lies in the Russian sphere of influence, by which, it also limits further American efforts to expand NATO, by taking away the moral right to do as it pleases.

Seventh, and this is probably the key point of the Admiral’s IDSA address, it questions American foreign policy, and reveals a startling divergence of security views. Forcing a political confrontation over Ukraine, with no demonstrable logic or objective, might just be an irreversible move too far, with serious geopolitical repercussions.

And, eighth, the Admiral’s exasperation appeared to stem from a gnawing worry, that if NATO stayed on this confrontational path, and push came to shove, America might not be able to ensure Europe’s security in the face of an incensed Russia.

Now, Schönbach may have had to resign for his impressive candour (whether extempore or scripted), but his IDSA moment is a turning point in world affairs. Bureaucrats and politicians will undoubtedly ensure that the episode is swiftly brushed under the carpet, and hopefully forgotten, but it cannot be denied that the Admiral has stripped a few narratives naked, and provided legitimacy to views that were hitherto only whispered in the shadows.

From here on in, further aggressive NATO posturing against Russia, over Ukraine, will have progressively fewer takers, rekindle debates over the need for a NATO, highlight the actual truth of Europe’s fears and needs, demarcate spheres of influence more clearly, and bring American foreign policy under greater scrutiny – particularly by its closest allies.

Incoherent unilateralism with a unipolar view will no longer be able to find sweeping moral sanction in a decidedly multipolar world, filled with diverse sovereign aspirations and conflicting regional dynamics.

And for that at least, it must be admitted that Vice Admiral Kay-Achim Schönbach has done yeoman service to the global cause, by giving so freely of his mind in New Delhi.