After Hosting Xi Jinping In Mamallapuram, Modi Heads To North East With Japan’s Shinzo Abe: This Is Where They’ll Meet 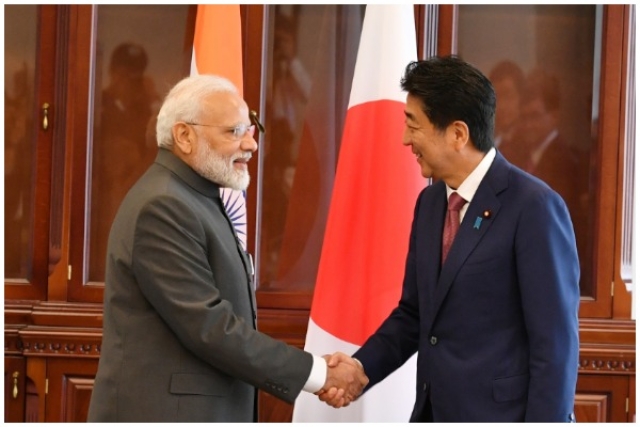 Nothing short of history will be created in the North East when Prime Minister Narendra Modi hosts his Japanese counterpart Shinzo Abe in Guwahati 10 days from now.

The Modi-Abe summit will take place on 15 December, and the two leaders will travel to Manipur’s capital Imphal the next day.

This is the first time that a summit meeting between the Indian Prime Minister and the head of another country is taking place in the North East.

Leave aside holding such a summit in the North East, few foreign leaders have even been encouraged by past governments in New Delhi to visit the region.

“We could never have dreamt of hosting such a summit in this region in the past. It is at Prime Minister Modi’s initiative that this is happening. The people of North East are honoured and happy,” said Assam Finance Minister Himanta Biswa Sarma.

Modi has started the practice of holding summits with visiting foreign leaders in different parts of the country and taking them around to famous heritage sites around those places.

The latest such exercise was his meeting with Chinese President Xi Jinping at Chennai. Modi also took Xi to visit the famous temples at Mamallapuram (Mahabalipuram).

The suggestion to host the summit with Abe in Guwahati came from the Prime Minister’s Office and was a pleasant surprise. “We could not believe it when we received the proposal,” said Sarma.

This will be the first time in recent memory that a city in the North East will be hosting the head of a country. Such summits between the Indian Prime Minister and a visiting leader would, earlier, take place only in Delhi.

Soon after landing separately at Guwahati on 15 December morning, Modi and Abe will drive to a colonial-era bungalow on the banks of the Brahmaputra.

The sprawling bungalow, which was the residence of the deputy commissioner of Kamrup, was converted into a heritage centre and renamed ‘Bahniman Brahmaputra River Heritage Bungalow’.

Modi and Abe will hold informal talks sitting on the verdant lawns of the bungalow and enjoy the sight of the Brahmaputra flowing by. The lawns also offer an excellent view of the Umananda Temple on the peacock island in the middle of the river.

Modi will then take Abe on a cruise down the Brahmaputra on a traditionally crafter riverboat MV Rudra Singha, named after the famous seventeenth century Ahom king.

After the cruise, they will return to the heritage bungalow for a lunch of traditional Assamese dishes and hold further discussions. In the evening, the two leaders will attend a business conference at a star hotel in the city.

The next day, Modi and Abe will fly to Manipur’s capital Imphal to pay their tributes to Japanese soldiers, who died during the Battle of Imphal in the Second World War. Japan had built the India Peace Memorial at Maibam village, about 18 kilometres southwest of Imphal.

The two leaders may also visit the INA Museum at Moirang, which is about 25 kilometres away from Maibam. Moirang was the headquarters of Netaji Subhas Chandra Bose’s Indian National Army (INA).

Colonel Shaukat Malik hoisted the Indian tricolour (with the leaping tiger) for the second time on Indian soil at Moirang on 14 April 1944 (the tricolour was first hoisted by Bose himself at Port Blair on 29 December 1943).

“North East, though rich in history, heritage, beauty, natural resources and diverse flora and fauna, has remained isolated from the collective consciousness of the rest of India. The emotional connect between this region and the rest of India has remained very weak. This summit will go a long way in strengthening the emotional connect. The North East has been honoured by Prime Minister Modi in a major way for the first time,” said Sarma.

Modi has often spoken about the “captivating beauty” of the North East and its “amazingly diverse culture and traditions” while urging Indians from the rest of the country to visit the region.

In his edition of Mann Ki Baat in the last week of November, Modi had urged listeners to visit the North East and experience its natural beauty and wildlife.