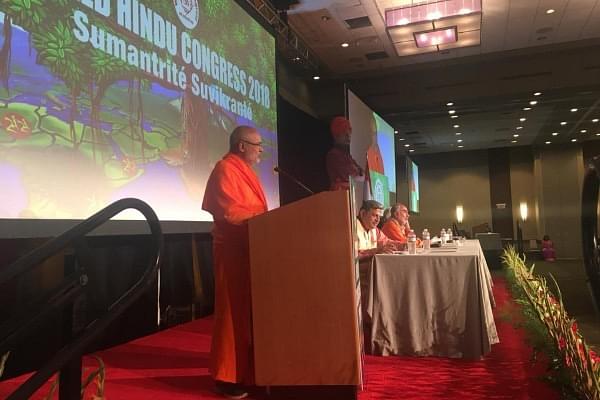 In response to my article on the World Hindu Congress (WHC) and of the calculated campaign to malign it, a reader trolled: “It is time morons like you accept that Hinduism is not a religion but a cult practised by vermins (sic) calling themselves as upper caste. Come down from that stupid pedestal. Your cult is imploding.”

Just like the Nazis labelled Jews “an alien race”, and “parasites,” and Hitler talked of a “final solution,” we see patterns of such hate and labelling emanating from groups claiming minority and oppressed status but who are actually in bed with the purveyors of fundamentalist and monopolistic religions, extremist ideologies, pursuing their own version of a “final solution” for India – the vivisection of the nation, the destruction or evisceration of a millennia-old civilisation, and the desecration of temples of a people they have conveniently labelled as “oppressors,” “savarnas,” “Manuvadis,” and so on.

It also does not matter that there are any number of learned commentaries on the nature of Hindu texts, and any number of homegrown reformists who have, over centuries, quietly and effectively called out those who are cussed and blinkered.

In this context, therefore, it is important to continue our investigation of the groups and individuals who are on this hate-binge, and to reveal how a combination of forces, in India and in the West, have brought in an array of weapons and ideologies to train on and target Hindus and Hinduism. Among the 11 “paper organisations,” and website-presence-only provocateurs, mentioned in my previous piece, the Organization for Minorities of India (OMI) is quite probably the most insidious of the groups that is behind the attacks on the World Hindu Congress.

Although this organisation operates as a broader group for Indian minorities, it is directed by extremist Sikhs. Its activities include campaigns to oppose Mahatma Gandhi statues in California (one of the dropdown lists on the OMI site includes one labelled “Real Gandhi” – with the dropdown menu including “Gandhi’s racism,” “Gandhi’s American widow,” and such other items); 1984 “genocide” resolutions, primarily in California; anti-India initiatives in the US Congress; and in demonising Hindus in California textbooks.

Bhajan Singh Bhinder is closely associated with the group and acts as a frequent spokesperson of OMI, as does Pieter Friedrich aka Pieter Singh, mentioned in the article on the WHC. Bhinder has no qualms in putting the blame for the 1984 attacks on Sikhs – carried out at the behest of the Congress party, in response to the assassination of prime minister Indira Gandhi by her Sikh bodyguards – on Narendra Modi and the BJP.

In the City of Davis, for example, OMI denigrated Gandhi in a public campaign, lobbied city council officials against a resolution, and protested at a ceremony to honour him. These protests are another example of the partnership of Sikh groups with extremist Dalit and Ambedkarite organisations as well as hardline Muslim groups. Similar tactics have been utilised in other cities, including Fresno and Cerritos.

According to a DEA agent’s declaration, a pair of Customs Service agents posed as weapons dealers. Bhinder and Gurtej Singh allegedly met with the undercover agents to negotiate the purchase of assault weapons and shoulder-fired missiles for the Free Khalistan movement. The meeting took place at the Blue Dolphin restaurant in the San Leandro Marina. After lunch, the declaration states, the group retired to a yacht docked in the surrounding marina. Bhinder allegedly said he was looking for one tonne of C-4 plastic explosive “to start with”.

The declaration says the unnamed agents then showed Bhinder and Singh a collection of machine guns. They were evidently looking for something with more firepower, namely M-16s, AK-47s, detonators, night-vision goggles, mobile communications equipment, remote-control equipment, grenade- and rocket-launchers and, for good measure, Stinger missiles. Bhinder allegedly said the weapons would travel via yacht to Pakistan.

They would then move overland by truck into India, where members of the Free Khalistan movement would receive them. Bhinder, the declaration said, would pay half of the money when he got the weapons and the other half when the shipment arrived in India.

The investigation was later abandoned due to a lack of resources and agency priorities, after Bhinder backed out when he suspected “something felt wrong.” Bhinder has since gone on to found several other organisations, including Sikh Information Centre (SIC) and Organisation for Minorities of India (OFMI).

As we look into these organisations and groups, and their leaders and provocateurs, who have now found succour in the West and support from Western media, politicians, and religious organisations, we can further cement our argument that these are not just “paper tigers” growling in the dark, but whose coordinated campaigns against India and Hindus are a threat to humanity.