Between Trump, Sunak And EU Right, India Has Potential Allies To Counter Wokeism And Hinduphobia 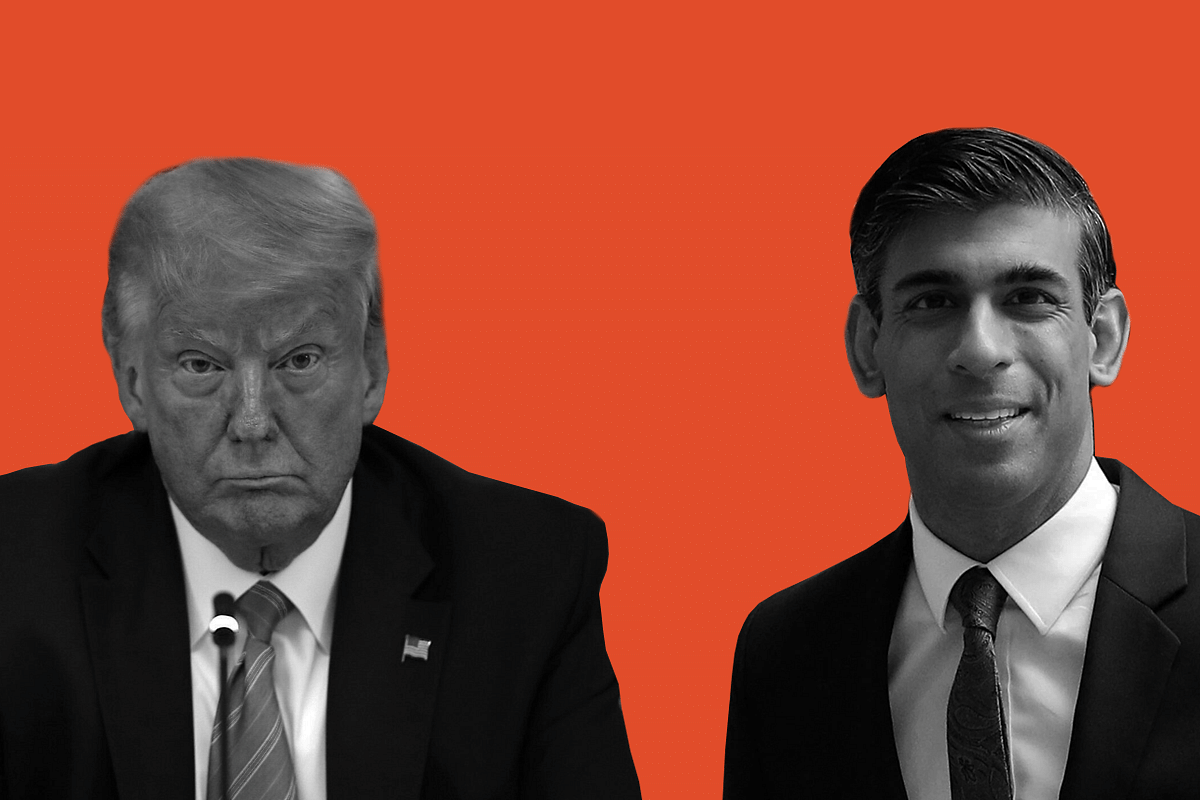 Former US president Donald Trump’s endorsement of the idea of building a Hindu holocaust museum in Washington DC may not be the kind of support Hindus may be waiting for.

As someone who is in the doghouse of 'woke liberals', it may even be seen as one more reason for taking Hinduphobia and Hindumisia in the US to the next level.

However, the statement, no doubt intended to entice the Hindu vote for Trump supporters in the upcoming Congressional elections of 8 November, is a nudge to the Bharatiya Janata Party (BJP) that it can and should court political allies in the West to counter the anti-India, anti-Hindu biases of mainstream academics and Islamists.

When it comes to taking on woke liberals, India’s political interests are closer aligned with the Right than the Left.

Trump is quoted as saying: “We had support from the Hindu population, the great Hindu people, both times (2016 and 2020) and great support from India, people from India. I fully endorsed the idea of building a Hindu Holocaust memorial in (Washington) DC.”

Narendra Modi’s slogan, Abki Baar Trump Sarkar, at the Howdy Modi event in Texas in 2019, may not have helped Trump win in 2020, but he clearly sees merit in weaning US Hindus away from their traditional support for the Democrats, who are leaning farther and farther Left, and becoming Hinduphobic to boot.

The simple point is that when it comes to defending national interests, and particularly the interests of India’s Hindus, where the support is coming from is less important that whether there is support at all.

If the US can claim to be an ally of Pakistan, the nursery of global terrorism, and find in Russia — a manifestly Christian country — a sworn enemy, there is no reason why anti-woke political forces in the US or elsewhere need not be our allies.

At the very least, the BJP, as a political party, should seek out such allies to mitigate pressure from Left-wing and Islamist forces from forcing their own agendas down our throats.

If the Congress party can seek out party-to-party relations with the authoritarian Chinese Communist Party (they signed an MoU in 2008), one wonders why the BJP should not develop party-to-party ties with Right-wing democratic parties in the US (Republican), United Kingdom (the Conservatives), Austria, the Netherlands, Sweden or Italy, where Giorgia Meloni’s Band of Brothers party won the last elections and rules as head of a Right-wing coalition.

In large parts of Eastern Europe, Right-wing parties are either gaining ground or have begun to dominate, especially in Hungary. Armenia and Greece are two other potential allies for India.

A Pew Research analysis suggests that populist parties from the Right have been gaining ground in Europe, especially in terms of vote shares.

Even France and Germany saw this trend, even though the Right did not gain power. That’s partly because in France Emmanuel Macron is himself a centrist, and in Germany, all political parties tend to be Conservative economically.

As the world slides towards de-globalisation, nationalist and/or Right-wing political forces may continue to gain ground, making it easier for the BJP to develop party-to-party relations with at least some of them.

The BJP first showed signs of using the European Right for its own purposes when, in 2019, it invited non-Left European Union parliament members to visit Jammu & Kashmir after the nullification of article 370.

Once it develops ties with many more European parties, it can widen its options in influencing European and American public opinion.

Two caveats are in order.

One, since many of the Right-wing parties tend to be strongly Christian in orientation, the BJP will have to ensure that there is no counter pressure on it to allow the rapid evangelisation of India.

It has to draw a firm line in sand on this issue. The alliance should be against Islamism and wokeism only.

Two, in countries like France and Germany, where there is not much of an anti-India feeling (except in the context of the Ukraine war), the BJP should focus on the parties in power rather than throw in its lot entirely with Right-wing or even neo-Nazi parties.

It is only in countries which have parties with a pronounced anti-India bias (Labour in Britain, Democrats in the US) that the Right-wing alliances need to be strengthened.

Otherwise, equidistance from the two main political formations would be useful.

The rise of the Euro-sceptic right, Rishi Sunak in the UK, and the continued relevance of Donald Trump in the US, even if only for the short-term, are signals that India has potential options and allies for spreading its influence globally.

At the very least, it can reduce or mitigate the toxic levels of Hinduphobia seen recently in Western academia and politics.