China Vs Uyghurs: Our Attitude Should Be, 'It's Not Our Fight' 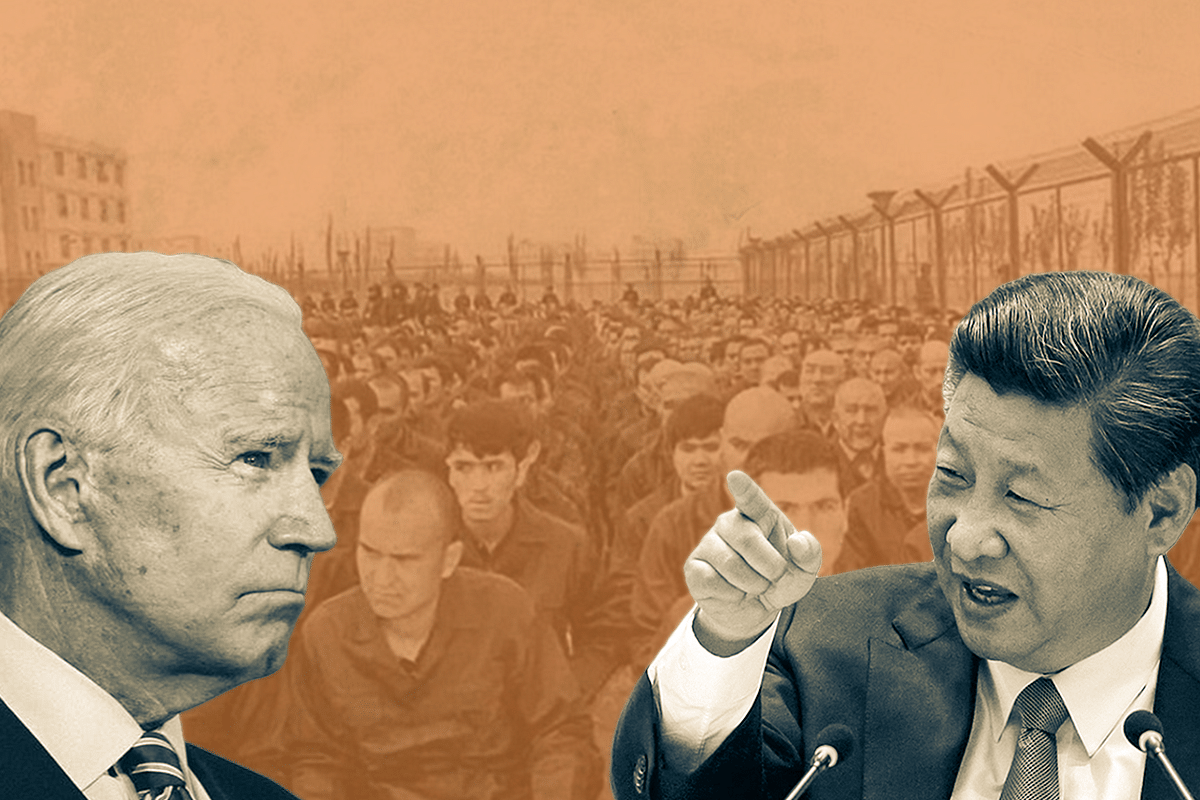 US President Joe Biden is believed to have raised human rights concerns in his four-hour video conference with Chinese President Xi Jinping, including the treatment of Uyghur minorities in Xinjiang. Video evidence of large concentration camps and prisons in Xinjiang have surfaced since last year, making it impossible to deny Chinese persecution of this Muslim minority. A few years ago, India gave asylum to a prominent Uyghur activist, Dolkun Isa. After the Galwan clashes last summer between Indian and Chinese troops, many Indian TV channels and Indians in the US also took up the treatment of Uyghurs in China as an after-thought (including this writer, mea culpa).

While giving the odd political activist asylum is okay from a purely humanitarian point of view, India and Indians should rethink the volume of support we give to Uyghur Muslims. China persecutes everybody, including Tibetans and many of its own citizens if they step out of line, so Uyghurs are not a special case.

India’s simple policy on Uyghurs should be to wait and watch. Not our dog, not our fight. If at all we must support any minority outside India, it must be the Tibetans and the Hindus in our neighbourhood who have no sponsors anywhere.

The starting point of our understanding of the Uyghur situation, or, for that matter, the treatment of non-Hindu, non-Buddhist, non-Sikh, non-Jain minorities anywhere, should be Ambedkar’s clear-sighted view of Islam. He wrote:

“Islam is a close corporation and the distinction that it makes between Muslims and non-Muslims is a very real, very positive and very alienating distinction. The brotherhood of Islam is not the universal brotherhood of man. It is the brotherhood of Muslims for Muslims only. There is fraternity but its benefit is confined to those within that corporation. For those who are outside the corporation, there is nothing but contempt and enmity.”

Given this reality, one has to really ask a simple question: what are Muslim countries themselves doing about the persecution of Uyghurs in China?

If this is what a 'close corporation' does to its own persecutees, why should we obsess about human rights in Xinjiang? In the battle between two 'close corporations', the Chinese Communist Party and global Islam, one has chosen silence as the better part of discretion. We would be fools to rush where Islamists fear to tread.

Some years ago, Turkish President Recep Tayyip Erdogan, who fancies himself as the next Caliph of global Islam, spoke up about the Uyghur oppression, but more recently, dogged by financial troubles at home, he has kissed and made up with China. He reckons that he needs Chinese money. Ditto for Iran and other Muslim-majority countries. Not to speak of Pakistan. When it comes to China, Pakistani’s Imran Khan displays no spine.

The surprise is that the US still thinks its concern for Uyghurs is somehow going to make a difference. It has ceased to learn from its own experiences with supporting Islamic causes around the globe in the name of human rights.

The US supported the Afghan mujahideen, and the only long-term outcome was more antagonism from radical Islamists, 9/11 and terrorist attacks all over Europe. The US wars on terrorism, always poorly thought out, have ensured the return of the Taliban in Afghanistan — after being ousted from the country 20 years ago.

US support for Muslims in Bosnia and Kosovo has not resulted in any appreciable increase in Uncle Sam’s approval ratings with Muslims and Islam. One should be clear that even if the US abandons Israel — highly unlikely — under pressure from its own Left-liberal caucus, global Islam is not going to suddenly become a furry panda waiting to be tickled.

India backed Bangladesh in its fight for independence from Punjabi imperialism in Pakistan. But after a few years of top-level political bonhomie, which continues even now, the persecution of Hindus has not stopped.

It is interesting to note how our own Left-liberal ecosystem refuses to take on China (read here, here) even after Galwan and the persecution of Uyghurs, choosing to dodge the issue by pointing fingers at our own alleged mistreatment of Muslims. Even speaking up for persecuted Hindus in Bangladesh is a no-no for them, as we saw recently.

So, here is the bottomline: in the battle between two totalitarianisms and imperialisms, Islam and the Han supremacist Chinese Communist Party, the former has chosen to remain silent for its own reasons. It reminds us of the Ribbentrop-Molotov Pact before the Second World War, where two fascist regimes, Germany and Stalinist Russia, did a deal for their own reasons. China is buying off the Islamic bloc with money and projects, and for now they have put a zipper across their mouths.

It won’t last. At some point in the future, the Islamists are going to turn against China, and the world could become a bloodier place. The non-Chinese, non-Islamic world has no role to play in this battle of two kinds of totalitarianisms. At best, it should try to insulate itself from its fallout.

To repeat: not our dog, not our fight.