Contemplating A Law Of Return In India 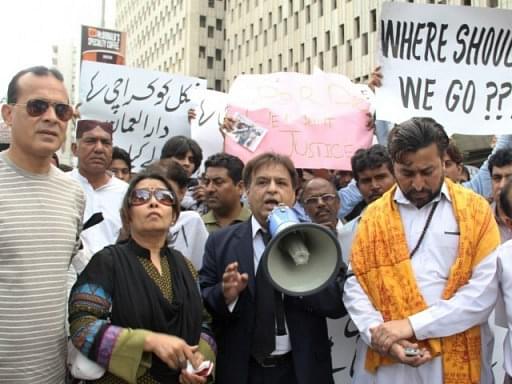 The persecution of Hindus in Pakistan and Bangladesh is not a fact which can be debated. The brutal daylight hacking of Avijit Roy was just another name to the long list. And to assume that the persecution is by Islamic fanatics, who are few in numbers, would be an obvious mistake. A simple online search would be enough to show that the government machineries in these countries have failed to protect them, if not actively participate in, the persecution of Hindus. In Pakistan, the academic curriculum itself preaches a language of hate against the minorities. A report by Human Rights Commission of Pakistan in 2010 stated that nearly 300 Hindu girls are abducted every year. The incidents continue to increase.  The Hindu community, being a religious and cultural minority in these states, is living under constant threat. The continued persecution of Hindus in these countries brings us to the obvious question- where will they go?

What is law of Return?

Law of Return is a 1950 law of Israel that gives Jews a legal right to live and gain citizenship in Israel. It also applies to grandchildren of Jews and their spouses. The law was promulgated in order to create a “home” for the persecuted, humiliates and insecure Jews all over the world. Most of the European countries were apprehensive about taking in Jew refugees and the law wished to create a natural home for them. Interestingly, the actual concept of Right to return to Israel was contemplated by the UN Resolution 194 passed on December 11, 1948 which called on the newly formed Israeli state to repatriate the three-quarters of Palestine’s population who were displaced in the Arab-Israeli war of 1948. Israel refused to implement the resolution and instead took a decision which was necessary to ensure its existence- promulgating the law of return for Jews.

The arguments against the law bat for a similar right to return for the Arabs and oppose the existence of such a right terming it against the secular nature of Israeli legal system. However, the law has proved its worth. As the incidents of religious intolerance against Jews increase in Europe, the community is battling with an existential crisis in the region. In 2013, the most recent year covered by a Pew study, harassment of Jews in Europe reached a seven-year high. National magazine Award winner Jeffery Goldberg, in his article in The Atlantic, goes on to argue that situation is becoming increasingly difficult for Jews in Europe.  His last paragraph even suggests that the time may have come for the Jews to make a “run for it”. He subtly indicates that Jews should leave Europe and migrate to Israel.

Last month, major newspapers in India carried the news that 7000 Pakistani Hindus, living in various regions of Rajasthan were to be given permanent citizenship and long term visas. While the initiative is commendable, it does not appear to be a long-term solution. The policy may change with a change in the government at the center. Another aspect is the Right to return of Person of Indian Origin which offers citizenship by descent. However, unfortunately, it is not available to individuals who have been a citizen of Pakistan and Bangladesh. During the election campaign, Modi had promised that India will be the natural home for the persecuted Hindus all over the world and same was included in the manifesto. It is our moral duty to ensure the ancient land of Hindus is, at least, a place where Hindus can return and call their home.

However, would it be enough to rely on long term visas and permanent citizenship by way to special orders or procedures? In fact, as of now, the process is very complicated and time consuming. It begins with a recommendation of citizenship by the local collector. The file is then sent to Home Ministry and then to foreign Ministry. After proper vetting, the sanction is provided to the collector. The collector then issues the certificate of citizenship.

Additionally, the cases are handled on a case-to-case basis in view of an affidavit filed before the authority prescribed under rule 38 of the Citizenship Rule, 2009, as renunciation certificate. The solution has to be permanent and visible. It must not only make India as a natural home to Hindus but should also ensure that Hindus from these two countries and from all other countries where they are being persecuted feel and accept India as their natural home.

The first and foremost step should be to award a legal protection coupled with a legal right to the refugees. An amendment to Citizenship Act, 1955, may do the job but may fail to convince them of India being a natural home to Hindus. The best way for the same would be to introduce a law of return in parliament.

The law should not only declare India as the natural home of Hindus all across the world but should also ensure that they have a de jure entitlement to Indian citizenship. It should not be a limited citizenship but one with all the bundle of rights and duties available to an Indian citizen born in India. Another aspect would be of their rehabilitation and settlement. The government should provide them with skill development trainings, jobs and loans under special rehabilitation schemes. However, it would be advisable to refrain from slicing any reservation for them as the inflow would be unpredictable.

Mere words will not help anymore. Short-term circulars and policies will not help either. The idea and focus should be on providing legal protection and entitlement. It will serve as a long term solution that would remain immune to the governments, political ideologies and diplomatic hurdles. However, the protection should not be limited to only persecuted Hindus. India should prepare and present itself to be the home to every Hindu, persecuted or not, in the world.