Crisis In The Maldives: Is It Time For India To Intervene? 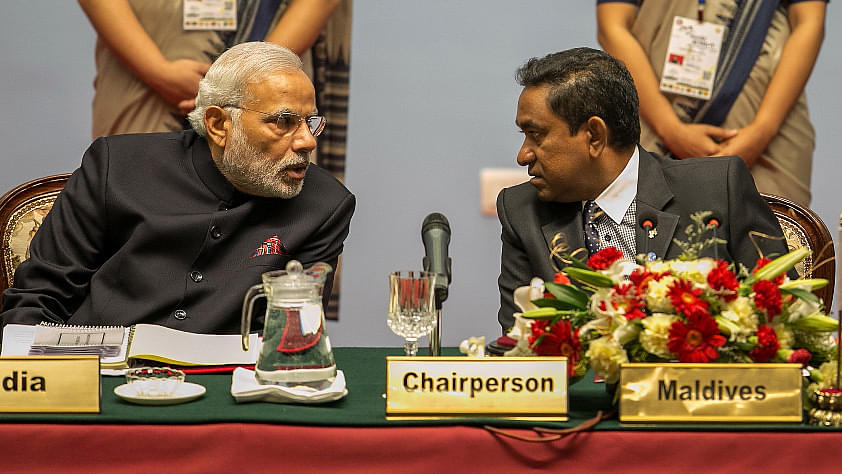 Even as President Abdulla Yameen crept closer to China at the expense of his country’s ties with India over the last four years, New Delhi has continued to engage him in the hope of working out a relationship in which he respects India’s interests and concerns. The effort continued till last month, when the Foreign Minister of Maldives arrived in New Delhi for a three-day visit just weeks after Yameen signed a Free Trade Agreement with China while keeping India outside the loop. This was just one of the many instances when he tested New Delhi’s patience.

However, as Yameen pushes the Maldives into chaos by imposing an emergency and cracking down on the judiciary for not towing his line, India is left with fewer options. It can either intervene to restore order in the Maldives and use it as an opportunity to display resolve to shape events in the neighborhood or let Yameen run free and display a lack of will to take on a greater responsibility in the region at a time when China is increasing its presence and influence.

Until now, New Delhi had been expecting a change of guard in Male in the upcoming elections. With the declaration of emergency, the prospects of timely elections have diminished, and so have India’s options. To safeguard its interests in the Maldives, playing hardball may now be the only option left for New Delhi.

It has been argued that an intervention would be detrimental to India’s standing in the neighbourhood as it would unsettle smaller neighbours. Those averse to the idea cite India’s commitment to the principle of non-intervention and suggest that the intervention in the Maldives in 1988, when the then prime minister Rajiv Gandhi dispatched 1,600 troops to the island nation to prevent a coup by mercenaries, enjoyed legitimacy and was welcomed by the world because it was a response to an appeal from the country’s president. An intervention now, it has been said, would not have the same legitimacy as it would bring down an elected government.

While the assertion that an intervention, in order to be popular, should enjoy some degree of legitimacy, is not flawed, the reading that an Indian involvement would be seen as illegitimate is based on a set of incorrect observations.

One, when India intervened in the Maldives in 1988, it was in favour of the then iron-fisted dictator Maumoon Abdul Gayoom, who had been in power for 10 years. He did not have the kind of legitimacy an elected leader has in a democracy and was accused of serious human rights abuses, including extrajudicial killings and torture. Despite this, the world responded with cheer when India averted the crisis for it feared worse in case of a successful coup. The need to avert the coup made India’s intervention legitimate, not Gayoom’s call for it.

Two, the Maldivian opposition today enjoys more legitimacy at home and around the world than President Yameen. In the local-body elections held in May 2017, exiled ex-president Mohammad Nasheed’s Maldivian Democratic Party and its allies had won over 300 seats while Yameen’s Progressive Party of Maldives had won just 191. In the country’s parliament, the Majlis, the opposition, has a majority. The opposition, including Nasheed, has called on India to intervene militarily.

Three, although India has been averse to the idea of interference in other countries, its commitment to non-intervention is often overstated especially with respect to its neighbourhood – recall the Bangladesh liberation war of 1971 against Pakistan and the intervention in the civil war in Sri Lanka in 1987. In the Maldives, unlike in some other cases, there is no confrontation between Indian values and interests. As Prashant Jha of the Hindustan Times has pointed out, both “Indian values (democracy, rule of law, pluralism) and interests (unfriendly regime, China’s entry, radicalisation) are threatened” in the Maldives. There is little to justify non-interventionism when the choice is between an unfriendly dictatorial regime detrimental to Indian interests and a potentially friendly one elected through democratic means.

Four, not all interventions need to be led by the military. India can use a range of tools, including coercive diplomacy, to convince Yameen to back off and commit to a democratic reset. By all logic, it would be unwise to use military resources unless all diplomatic efforts fail to convince Yameen. However, if an Indian Navy flotilla is what it takes, New Delhi should have no qualms in dispatching one at the earliest.

Nevertheless, a question remains: will a democratically elected government, which comes to power following an intervention, heed to India’s strategic and economic interests? Or will it, like Yameen, drift the Maldives further towards China?

While ascertaining this even before an intervention would be premature, one has enough evidence to believe that a new government – potentially headed by Nasheed, the country’s first democratically elected president – would be more willing to heed India’s interests and concerns than Yameen has.

Although it was under Nasheed that China opened its embassy in the Maldives, he has often advocated a balanced approach towards relations with China while keeping India as the main partner. He has, in recent months, indicated that he would review deals signed with Beijing under Yameen and has expressed concerns over growing debt to China. Therefore, a change of guard in Male is expected to arrest Maldives’ continued descent into China’s fold.