Daesh At The Doorstep: Why India Must Promote Sufism To Check The Stealthy Salafis 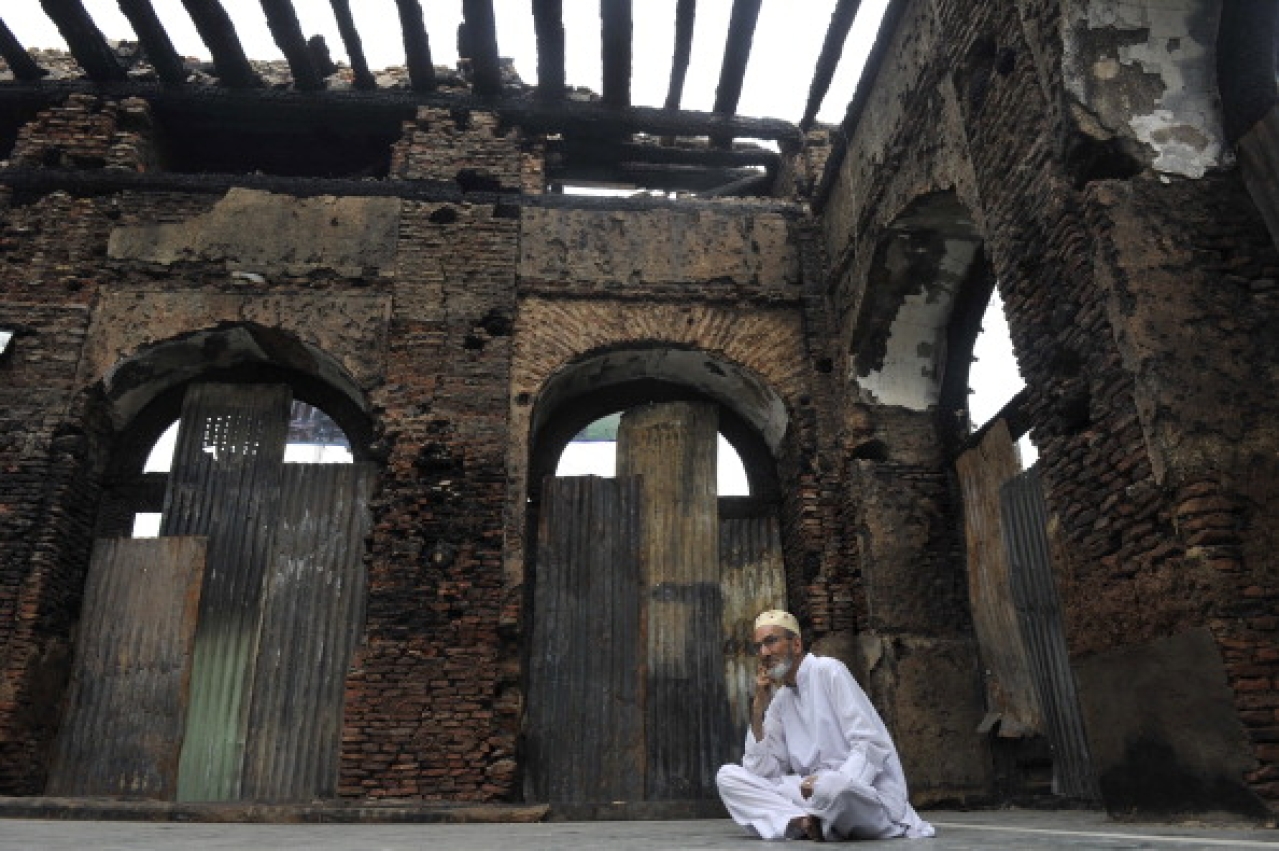 A Kashmiri Muslim sits next to the ruins of a revered 200-year old sufi shrine in Srinagar. (TAUSEEF MUSTAFA/AFP/GettyImages)

Runa Laila's rendering of the folk ballad Damadam Mast Qalandar always evoked in me the desire to learn more about, and even visit, the famous shrine of Lal Shahbaz Qalandar, the 13th century Sufi saint, in Sindh, Pakistan. The Sufi in me is symbolic of the strength of love for Sufiyat all over South Asia. Its middle path, tolerant and syncretic approach to faith, attracts devotees cutting across many faiths.

In Bangladesh, my hosts proudly informed me that their Islam was essentially Sufi. In Jammu and Kashmir, the Sufi tradition is avidly followed although, currently, it is also under severe strain. The shrine of Hazrat Moinuddin Chishti at the Ajmer Sharif Dargah evokes the finest emotions of faith, especially because one rubs shoulders with as many Hindu and Sikh pilgrims as Muslim. In fact, Lal Shahbaz Qalandar was also commonly referred as jhulelal (the river deity) by local Sindhi Hindus, as the shrine stands close to the river Indus. It is also famous for the dhamaal, a dance by hundreds of men and women to the sound of drum beats, an action which supposedly places the individual in direct contact with his maker.

So, the death of almost 80 pilgrims at the shrine, in a suicide attack, can only spark agony. There are all kinds of political and strategic linkages to this, on which one can pontificate in long treatises, but the core issues are few and need highlighting.

It starts with the present before going back to recent history, the last 40 years or so. The immediate concern is that it happened at our doorstep again, a year after a major terror attack consumed innocent victims in Bangladesh. Both the attacks had an Islamic State (Daesh) link, although the Dhaka affair had an element of doubt, but the connect was unmistakable.

Daesh under pressure in Iraq and Syria, where its bastions are eroding, undeniably continues to display its transnational capability. We imagined that its South Asian footprint was weak; that it would not enter zones where it would have to compete with other devious players. But, if it is actually Daesh at work in this incident in Pakistan, then the stakes have just gone higher. Of course, there is the possibility that Pakistan's homegrown Tehreek-e-Taliban could have executed this and attributed it to Daesh. But, terror groups usually don't do all the dirty work and give the publicity to someone else. That could be if there is suddenly a grand design of cooperation between transnational terror groups, as a kind of joint response to US President Donald Trump’s hostile actions. If there is any such grand alliance, then obviously India would be on the scanner very soon. While eyes and ears remain peeled in Jammu and Kashmir, or north and central India, it is the country’s south, which needs the maximum alert.

The second issue worth flagging is the fact that it is easy to employ kinetic means to temporarily suppress violent extremism, but claiming comprehensive resolution to the problem through these means reflects poor understanding. Pakistan's military leadership patted itself on the back and went viral in its claims of having cleaned out Karachi, North West Frontier Province (NWFP) and other areas of the endemic violence, which existed for the last 10 years. Former Pakistan army chief Raheel Sharif has even become the head of the Islamic Anti-Terror Coalition in the Middle East on the back of his much-touted achievements. Credit could be given to the Pakistan military leadership for its focused employment of counter violence, but it failed to stick to the strategy of the National Action Plan, after the tragic events at the Army Public School, Peshawar, in December 2015.

The Pakistan army is failing in its larger responsibility because there is no way that terrorism can be comprehensively rooted out with its current policy of soft pedaling the issue related to the Punjab-based terror groups, which are its strategic assets against India – in Jammu and Kashmir and elsewhere. Even Prime Minister Nawaz Sharif and his brother Shahbaz, the Chief Minister of Punjab, have rooted the politics of Pakistan Muslim League (PML) in Punjab with the links it has established with radical terror groups over a period of time. Symbolic gestures of restraining the Jamat Ul Dawa chief, Hafiz Sayeed, in calibration with fresh policies of the US isn't exactly a way of fighting terror and none in the US is going to be impressed either. The PML’s strength in Punjab is based on its terror linkages and other criminal activities, and elections are not too far away, meaning nothing much can be expected anytime soon.

Pakistan's obsession with Afghanistan, to achieve its so-called strategic depth and to keep Indian influence out, has led it to establish its own strategic assets on that flank too. The Taliban, creation of the ISI, and devious networks such as the Haqqanis are an attempt to dominate and influence the larger narrative of the New Great Game in the region. Pakistan will not pull out from these networks as it is too deeply entrenched with them; but by remaining there, it will increasingly embroil itself in the mounting negatives of games involving spheres of influence. It lost a strategic opportunity when Ashraf Ghani placed all his cards with it in 2014, to come to some agreement with the Taliban. Pakistan couldn’t play this with any conclusive strategy, losing the Afghan strategic space.

Stung by the string of terror related incidents culminating with the Lal Shahbaz Qalandar incident, the Pakistan Army Chief, General Qamar Bajwa, thus far perceived with an image of intellect and rationale, decided to respond with swift armed action. It has led to the killing of a large number of alleged terrorists, with the Pakistan Army even launching trans-border operations into Afghanistan to target terror bases. The implications are worsening political relations with Afghanistan. The Pakistan Army’s claims that terrorists have been eliminated also find little credible acceptance.

Pakistan cannot hope to secure its western border with this policy. Its strategic partner China, which is yet to understand Afghanistan adequately, will surely wish to stabilise the security environment of the zone to allow the full benefits of the China Pakistan Economic Corridor (CPEC) into which so much money is being sunk. Although Russia, the newest returnee to the Afghanistan conundrum, is working closely with Pakistan and China, its strategic wisdom can hardly be expected to endorse Pakistan's strategy. Its concerns about violent extremism led by Islamic terrorists is real, and it would want none of this germinating beyond a stage on its borders or its near abroad region.

It is not going to be easy for Pakistan to get off the tiger it first decided to ride, with the birth of Zia Ul Haq's strategy of retribution against India. Every negative for Pakistan has flowed from that disastrous decision. The core issue in this was Pakistan’s unwise decision to alter the Sufi character of its faith and encourage the import of the radical Saudi brand in the hope that it would rally an Islamic spirit for the nation. The radical Salafi brand, now anathema to the whole world, militates against Pakistan’s own internal interests, leading to a huge sectarian and sub sectarian divide. It’s not going to be easy turning back the clock. Meddling with ideology is usually a one way ticket.

The Salafi conflict against Sufis, Shias and non-Muslim minorities in Pakistan is going to become even more intense. And no amount of Pakistan Army bombings across the Pakistan-Afghanistan border or killings of terrorists is going to restore the old order, unless a conscious effort to change the disastrous strategy of harnessing radical ideology for supposed national strategic interest of Pakistan is reversed. For that, the education system, the religious discourse in institutions and the general character of the faith of Islam will need to undergo a change.

The inherent dangers for India will remain even if its neighbour decides to change tack. This is not something which will alter overnight. That is all the more reason why India must effectively promote syncretic culture. It must harp on the worth of the Sufi strain of Islam as a binder of faiths. The need for this is all over India, especially Jammu and Kashmir, and the involvement of the Sufis in promotion of such syncretism and prevention of the Salafi creep, is going to be essential.