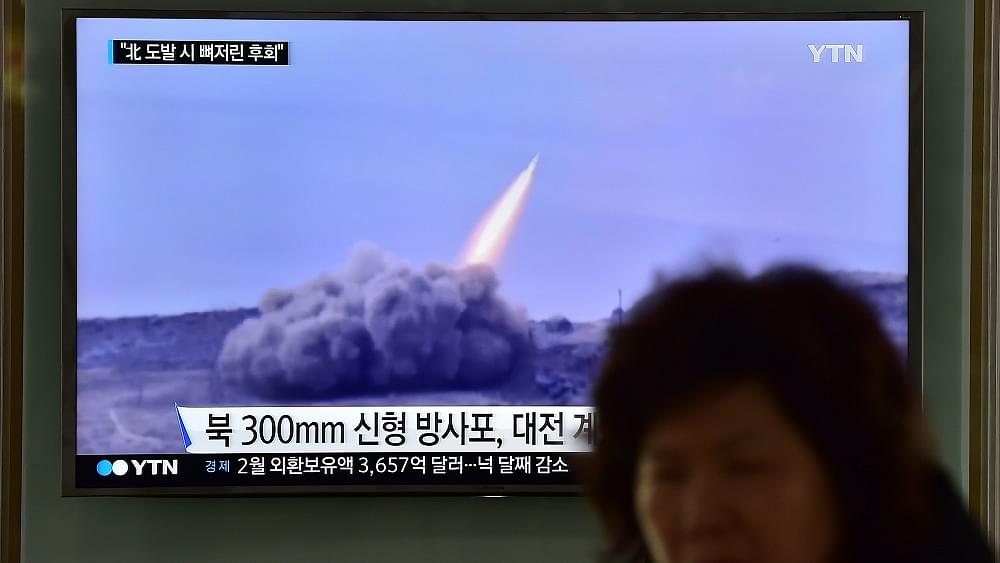 North Korea is in the news again. It is threatening South Korea, the United States and the entire world with its nuclear and missile arsenal. Most in the world are not much worried. They consider it as a regular bluff by the North Korean dictator. But one never knows when that cruel dictator would become adventurous and pull a stunt that could have far-reaching consequences.

Ever wondered how North Korea – a country that has the worst kind of communist dictatorship, which starves and tortures its citizens, where there is no proper education system, no technological or engineering base – became a nuclear power?

Readers would remember that remarkable confession of Dr A Q Khan, Pakistan’s infamous ‘nuclear’ scientist. It was on 4 February 2004 when Khan appeared on the television and confessed to having supplied nuclear technology and components to North Korea, Iran and Libya. Khan accepted his crimes in English and not in Urdu, which is the language understood by most Pakistanis.

That telecast was actually for the international audience, especially the United States and the European intelligence agencies. Khan explicitly mentioned that this proliferation network was entirely his own and the Pakistani government or authorities were never involved.

But was it true?

North Korea’s nuclear ambition started in the late 1950s and early 1960s. Erstwhile Union of Soviet Socialist Republics (USSR) agreed to set up their first plutonium-based nuclear reactor at Yongbyon-Kun for peaceful use of nuclear technology. Later, North Korea set up more reactors, signed Non-Proliferation Treaty (NPT) to get access to the latest technology and allowed International Atomic Energy Agency (IAEA) inspectors to inspect its nuclear facilities, but never gave up its desire to have ‘the bomb’.

In 1993, IAEA’s inspection team had concluded that North Korea is not completely honest about its ‘peaceful’ nuclear programme and had reprocessed nuclear material at least thrice – in 1989, 1990 and 1991.

But North Korea was still far from detonating a device.

Here, it is interesting to note that after Pakistan’s nuclear tests in 1998, a US sniffer aircraft flew over the test sites and took air samples. The Los Alamos nuclear laboratory tested those samples and found that the final test(s) was conducted using plutonium as fuel. Now, Pakistan had left the plutonium route long ago in 1975 when Khan bought stolen centrifugal technology from Europe where he was working for URENCO as a technical translator.

So why did they detonate a plutonium device? CIA believed that Pakistan tested a North Korean nuclear device based on plutonium fuel.

The CIA and Western agencies had reasons to believe that.

If we check Western intelligence agencies’ declassified information and investigative work by leading journalists, it becomes clear that their cooperation started long ago.

Apart from China, Pakistan was the only major country in the world who not only maintained diplomatic relations with North Korea but received weaponry from them.

But the cooperation in nuclear and missile field started in the late 1980s.

Investigative journalists Adrian Levy and Catherine Scott-Clark did a commendable job while investigating Pakistan’s quest to acquire nuclear weapons and their proliferation. Their book Deception explains it all. In 2006, they interviewed Benazir Bhutto in Dubai. She revealed some interesting facts.

This evil thought of proliferation for monetary gains was the brainchild of Pakistani Army Chief General Mirza Aslam Beg.

Towards the end of 1989, Benazir Bhutto was the Prime Minister, and in a meeting (attended by General Jehangir Karamat, DGMI and General Hamid Gul, DG-ISI) General Beg briefed her about the Kashmir situation and suggested fuelling the insurgency by setting up more training camps, providing weaponry and logistic support, infiltrating 100,000 battle-hardened Afghan Mujahedeen.

Benazir was already under pressure due to the poor economic state of the country and from the US. She did not agree to escalate the situation; however, she agreed to let Pakistan Army continue the low-level insurgency.

Beg’s second proposal was far more dangerous. To run the low-level insurgency, Pakistan needed money from sources independent of International Monetary Fund (IMF) funding, US aid, etc. This was the first time when he suggested to sell off the nuclear technology and assistance to likely customers. Bhutto was stunned and could not believe her ears. But the only customer she could think of were Iraq, Iran and may be Libya.

She then told the General that IMF gave around $200 million a year to Pakistan and how many ‘customers’ he thought would give Pakistan that big an amount. And for how many years? What would happen when those customers receive all that they needed? What will happen when the international community gets to know about this proliferation?

Bhutto rejected the idea, and a disappointed General left her office. Bhutto claimed she had no clue about what happened later as the military would keep her away from Khan Research Laboratory and the nuclear programme.

But the General did not stop. In an interview in 2006, then US Ambassador in Pakistan, Robert Oakley, informed the authors of the book that soon after the meeting with Bhutto, General Beg went to Iran to get their support in Pakistan’s proxy war in Kashmir, and in return offered Iranians support for their nuclear programme.

Benazir also revealed that Pakistan Army and Khan did not lose hope. In December 1993, she was to visit Beijing, and Khan approached her again. He met Benazir and requested her to visit Pyongyang with a special request. Khan wanted Benazir to ask the North Korean dictator for Nodong missiles. He argued that Pakistan was developing short-range missiles which were not enough to hit deep inside India. He said, “we have the bomb, but we can't deliver it”.

Benazir was again shocked but agreed for a short trip to North Korea on her way back.

She discussed Khan’s proposal to her then counsel – Hussain Haqqani. He advised her not to fall into the trap of the security establishment, but Bhutto did not want to cross Army’s way again. She tried earlier during her first term as prime minister and she was accused of being a threat to national security, and her government was dismissed. Bhutto did not want that to happen again.

She claimed that she thought the missile deal would be against cash. She had no clue about Army and Khan’s plan to exchange nuclear technology instead.

Bhutto flew to Pyongyang on 29 December 1993, and during the dinner, a nervous Benazir bent over to the North Korean dictator and said, “Give my country Nodong missile’s blueprints, we need those missiles”.

Kim stared at her while she repeated the request. After a few moments’ silence, he agreed.

Bhutto came back with a bag full of technical papers and disks. Soon Pakistan Army and Khan got what they wanted – Nodong missiles.

They test-fired it. Dr Shafiq, son of Brig Sajawal, who was in-charge of facilities administration of Khan Research Laboratories, revealed to Adrian Levy and Catherine that “there was so much excitement that no one cared to notice that paint on the missiles were still wet”. Leading newspaper The Guadian had reported the same while quoting David Wright, the co-director of the global security programme at the Union of Concerned Scientists, “The first result was the Ghauri, a missile with a range of 1,500 km (930 miles). It was a repainted North Korean missile.”

An evil deal had started where Pakistan’s Uranium Enrichment technology was being exchanged for North Korean missile technology and some “cash”.

In 1995, Oakley held a conference in Washington where he invited three persons from Pakistan – former vice-chief Gen (R) Arif, Mr Agha Murtaza Poya, editor-in-chief of the newspaper The Muslim and famous Pakistani journalist and editor of The Friday Times, Nazam Sethi. During the conference, Oakley surprised all of them by showing photos of Pakistani Air Force’s C-130 planes unloading centrifuges and loading Nodong missile components. But Pakistan again denied the allegations of conducting any such exchange.

Soon there was plenty of other proof. Khan and PAF C-130s started making frequent trips to North Korea. The CIA and other agencies tightened their grip over Pakistan’s network. The US administration could no longer resist pressure from the State Department and intelligence agencies, who were giving irrefutable proof of Pakistan security establishment’s (Army leadership and Khan) one-stop shop that was supplying everything to North Korea, Iran and Libya – from blueprint to actual centrifuges, technical support, bomb design and trigger mechanism.

Everything was on offer for dollars – most of the amount went to Pakistan treasury, and some of it went to personal pockets. In 2011, the Washington Post reported that Khan had released a copy of a letter from a North Korean official, dated 1998. The letter had details of the transfer of $3 million to former Pakistan Army chief Jehangir Karamat, and $500,000 and some jewellery to another military official, Lt Gen Zulfiqar Khan.

In 2002, the US officially announced that they had proof against Pakistan having exported centrifugal technology to North Korea. But Pakistan’s former president Musharraf did not hand over Khan for any investigation. When pressure kept mounting, Pakistan’s security establishment persuaded Khan to take the sole responsibility in the country’s “national interest”. Khan was assured that there would be no trial, no one will be allowed to question him and, at most, he would be under house arrest.

But the Pakistan-North Korea cooperation never stopped. As per a Sunday Guardian report, sources suspected that North Korea is conducting nuclear tests for Pakistan to supply the latter with vital data. Pakistan requires this data to perfect its tactical nuclear weapons design.

Interestingly, China, the mentor and major supporter of both these countries, came out as the main beneficiary of this game. In early 1990s, China had refused to provide M-11 missiles to Pakistan as it was normalising its relations with the US and hoping to sign trade agreements to transfer manufacturing from the US to China. But China never stopped North Korea or Pakistan to fulfill each other’s requirements. China had earlier provided bomb design to Pakistan, and now both its main allies are threatening its arch enemies – the US and India.

This article was originally published on Indian Defence Review and has been re-published here with permission.