Do We Really Understand China? 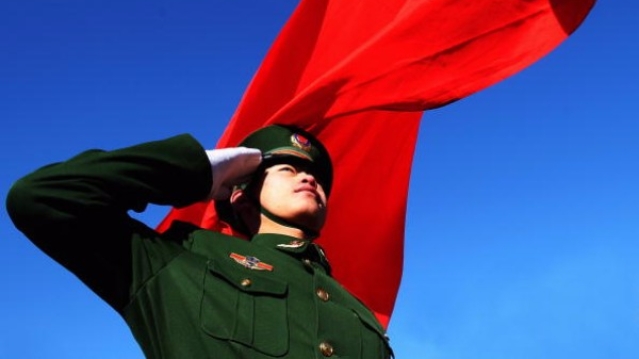 Paramilitary policeman does a national flag rising ceremony to mark the New Year before thousands of people climb the Great Wall on January 1, 2009 in Beijing, China. (Guang Niu/Getty Images)

India and China have not been seeing eye to eye for sometime now. The Indian and Chinese armies, after successfully stepping back from the standoff at Doklam, aren’t extending olive branches. This was evident as the two nations did not hold their annual traditional border personnel meeting to mark China’s sixty-eighth national day at the five designated places along the Line of Actual Control.

Former foreign secretary and author Shyam Saran in his book, How India Sees The World: Kautilya to the 21st Century, writes about India’s interaction with China. He notes that this neighbour is the one country “that has a direct impact on India as far as international relations go”, with a civilisation “as complex and as layered as our own”.

Narrating from his experience of visiting China numerous times and studying the country, Saran muses that “China remains poorly understood by India, and this lack of familiarity can be costly when it comes to safeguarding India’s interests.”

As I was walking away, my invitation accepted after an exchange that would have been easily appreciated in Lucknow, Mrs Chen called me back, and in a barely audible whisper said: ‘This is the first time I will be going to a student’s place for dinner in the several years I have taught at this school.’

I asked her why. She said, simply and politely, ‘You see, we never get beyond the first sentence. As soon as I say this will be too much trouble for my intended host and that I do not deserve the invitation, they think I am politely saying no to the invitation and the conversation ends there. In fact, I would like nothing better than to have dinner with my students but in our culture it is rude and impolite to say yes immediately.’ I felt relieved that at least in some respects our cultures were similar.

I must add that the somewhat old-world and excessively polite Mandarin I learnt in Hong Kong is no longer in use in revolutionary Beijing. I had to relearn much of the language, with its new and proletarian idiom. An early call I made on a senior female functionary in the government nearly ended in disaster when I addressed her with the honorifi c ‘Taitai’, which is a very polite way of referring to a married lady and, directly translated, means ‘great-great’. Apparently it had now become associated with abuse! I was politely told that this was a term associated with the bad old feudal society and that in new China everyone was a comrade. The old forms of address are making a comeback as China drifts away from its revolutionary pretensions.

It was difficult learning Mandarin. Writing the characters was not only a novel experience but also a window to the thought processes that lay behind them. Some concepts were so different from one’s own ways of thinking. I would always confuse the phrase for ‘day before yesterday’ (qian tian) with the phrase for ‘day after tomorrow’ (hou tian). Qian means ‘ïn front’, while hou means ‘at the rear’. How could a day in the future be behind us and a day in the past in front of us?

My teacher once asked me in frustration why I was always confused about something so logical and easy to understand.

I replied somewhat disdainfully that for most people the future was in front and the past behind. And here this logic was reversed. The teacher explained patiently that the past, having been already experienced, lies in front of us; it is no longer a mystery. And the future is behind us since we cannot see it! There were several such concepts in the language so very different from what one was accustomed to that it took me some time to internalize them. But it did make me appreciate the many perspectives from which the same phenomenon can be viewed; one’s own perspective is not the only valid one.

The Chinese characters functioned as a powerful instrument in forging a common identity among diverse peoples inhabiting a vast territory, even though their spoken dialects were as good as different languages. Over the centuries the Chinese script created a shared vocabulary and a relatively homogeneous culture, which has become the bedrock of Chinese identity.

Classical Chinese connected people over space and time. It provided a powerful element of unity to an empire that, from another perspective, was a mish-mash of ethnic groups and languages.

But for the same reason, it has been difficult for China to accept the separate identity of the Uighurs in Xinjiang and Tibet, who have rich, well-developed languages and scripts of their own.

The Chinese script, which has evolved along with Chinese culture over several thousand years, is integral to the latter. This has led to the importance that is attached to the written word in China. Chinese ideograms have also become an intrinsic element of Chinese aesthetics. Calligraphy is a much admired accomplishment, and Chinese characters figure as embellishments in classical painting and high-quality Chinese ceramics. Classical prose or poetry, written or transcribed by famous calligraphers, were admired as much for their visual impact as for their content.

Indian culture, by contrast, gives greater value to the spoken word. The ancient Vedas were heard as ‘srutis’, and memorized and chanted as ‘smritis’. Writing came much later; in fact, classical Sanskrit could be written in several ancient scripts, including Kharoshti, Brahmi and Devanagari. In reciting ancient Sanskrit hymns and prayers, meticulous rules for tone, pitch and rhythm had to be followed. Mantras are said to generate and transmit power only if their intonation is precise. Beauty is associated with and sought through pleasing arrangements of sounds which have a flow. Imagery is of lesser aesthetic value as it becomes static even as it is created. To an Indian, Chinese music may sound stilted and lacking in melody. Indian classical music, on the other hand, is a breathtaking permutation and combination of seven notes and the several microtones in between, blending mathematical precision into almost infinite improvisations.

Chinese culture is a predominantly visual one, a legacy of the ancient ideogram. India’s is predominantly an aural culture, with the spoken word, the chanted mantra and vocal music as its defining characteristics. The different civilizational paths forged by the two great Asian countries have also shaped the prism through which our respective cultures perceive the world around us, and how we interact with each other. The emphasis on the written word led to an immense treasury of historical documentation in China. The Chinese pilgrims Faxian and Xuanzang have left us elaborate records of their travels in India. They translated the voluminous Buddhist sutras that they gathered from the great monasteries of Taxila, Nalanda and Vikramshila. These have been preserved in libraries across China.

Even though several thousand Indian monks and teachers travelled to China between the first and tenth centuries, preaching and helping translate Sanskrit scriptures into Chinese languages, they have left behind no account of their adopted country. We know of them only through accounts preserved in Chinese documents. One such master is Bodhidharma, the first patriarch of Zen Buddhism, who travelled to China in the fifth century and was honoured by the king of the ruling Liang dynasty. Legend has it that he meditated for thirteen long years facing a blank wall at the famous Shaolin monastery before achieving enlightenment.

The enormous corpus of detailed historical records in China provides a contemporary reference point to the Chinese. Contemporary events are often interpreted using the wealth of historical analogies in the corpus. Even to this day, much of Chinese political discourse is carried out through recourse to historical analogies. Some are well-known and explicit, others artfully coded in language that lends itself easily to ambiguity and innuendo.

The start of the Cultural Revolution in China was signalled by a critical article on a play written by Wu Han, a scholar and historian of the Ming dynasty, titled Hai Rui Ba Guan (Hai Rui Dismissed from Office). Wu Han’s play appeared in 1961. It told the story of a Ming offi cial, Hai Rui, who was dismissed by the emperor for his honest criticism of the monarch’s policies and conduct. Criticism of the play appeared early in 1966, depicting it as a veiled attack on Mao himself.

Mao had purged the well-regarded Marshal Peng Dehuai in 1959 for daring to criticize him for the disastrous failure of the Great Leap Forward. Wu Han was put in prison, where he died in 1969.

During my first assignment in Beijing (1974–77), Chinese media and journals carried an obscure debate on the merits of ‘legalism’ associated with the Qin dynasty philosopher Han Feizi (280–233 bc) and the much better-known philosophical principles advocated by the sage Confucius. Han Feizi insisted that power was the decisive factor in interstate relations and there was no room for sentiment or moral principles so far as a ruler was concerned. He insisted that a king should rule by ruthlessly enforcing laws. It is said that the Qin emperor admired Han Feizi’s writings; they had guided him in his conquest of other warring kingdoms and in the rule of his own kingdom using terror. One can find echoes of Kautilya’s Arthashastra in them.

Confucius, on the other hand, was considered a philosopher of the feudal order, preaching virtue and paternalism for both ruler and householder alike. Confucius may have been comfortable with Ashoka’s Dhamma. The media debates on the merits of ‘legalism’ that I referred to above were an oblique reflection of the intense factional struggle then taking place between the radical left wing, associated with Mao’s wife, Jiang Qing, and a more moderate faction associated with Premier Zhou Enlai. Mao was identified as the latter-day Qin Shi Huangdi, while Zhou was identified with Confucius. This is yet another example of how historical analogies become instruments of current political battles in China.

The contrast with India, where history is still mostly a distraction, will be obvious. As a young diplomat serving in China, this was for me a most fascinating and intensive crash course in the use of history in statecraft and helped me sharpen my capacity for political analysis.

Excerpted from ‘How India Sees The World’ by Shyam Saran, Juggernaut, 2017, with the permission of the publisher.