Explained: History Of The Kurds Who Fought ISIS And Why Turkey Is Attacking Them Now 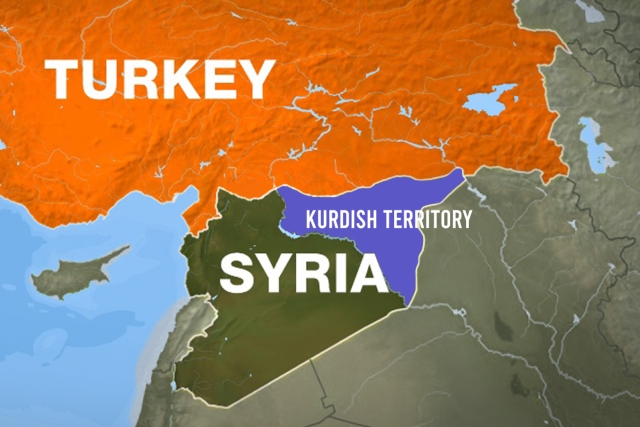 A map of the region showing the territory controlled by the Kurds.

Another military and humanitarian crisis is on the brink of unravelling in the Middle East, this time on the border of Syria and Turkey.

The conflict between the Kurds and Turkey has a lot at stake for not only does it threaten the political future of Recep Tayyip Erdoğan, Turkey’s President, but it could also result in the resurgence of the terrorist group, ISIS.

The conflict could further the civil war that has ravaged Syria for over nine years now, which has resulted in over 5,00,000 deaths and millions unaccounted for.

A Brief History Of The Kurds

Today, around 30 million Kurds live in Greater Kurdistan, an area that stretches across southeastern Turkey, parts of northern Iraq, and northeastern Syria.

The history of their interaction with Arab, Persian, and Turkic empires and groups spans centuries. At various points in history, the Kurds have collaborated or fought against these groups, depending on what was at stake for them.

The contemporary history of the Kurds begins at the end of the first World War, after the dissolution of the Ottoman Empire.

The 1920 Treaty of Sevres between the Allied Forces and the Ottomans promised an independence referendum in areas of Kurdish majority. However, what followed was a century of betrayal.

A Century of Betrayal

1920: The promise of an independence referendum made by Britain, France, and the United States to Kurds does not materialise. However, national borders for other nations are drawn across the region, leaving the Kurds stateless.

1923: The year when the Turkish republic is founded. Subsequent Kurdish uprisings are put down with brute Turkish force. There is also a ban on Kurdish languages and cultural practices. More rebellions are squashed in 1925, 1930, and 1937.

1946: After the Second World War, Iran is under the control of the Soviet Union. USSR encourages the idea of a Kurdish republic, independent of Iran, called the Republic of Mahabad. However, the dream is destroyed as soon as the Soviets leave.

1958: Kurdish leader, Mustafa Barzani, who fought for the Republic of Mahabad leads another uprising in Iraq and this leads to a war that will go on until 1970. In this war, the Kurds find themselves backed by the Shah of Iran, an ally of the United States of America (US).

1962: Over 20 per cent of the Syrian Kurdish population lose their Syrian nationality. This voids them of rights to employment, education, civil property, and political standing. Their landholdings are transferred to Arab settlers.

1975: The year of great betrayal for the Kurds as the Shah of Iran --- who had gone as far as asking President Richard Nixon of the United States to help Barzani --- makes a deal with Iraq. The Kurds are left helpless.

1978: A new ray of hope rises for the Kurds as the Kurdistan Workers’ Party (PKK), radical in its means, is created by a Turkish Kurd, Abdullah Ocalan. PKK employs guerilla war against Turkey in 1980s. Conflict unfolds over the next four decades.

1988: The Iran-Iraq war, on since 1980, is drawing to a close. However, Iraq’s Saddam Hussein unleashes a genocide against Iraqi Kurds. 5000 people, mainly Kurds, are killed in a single day in a chemical attack sanctioned by him.

1991: US President George HW Bush fuels a Kurdish uprising in northern Iraq. Saddam Hussein crushes the uprising. An exodus of Kurds to the border of Iraq and Turkey ensues. The West then creates a no-fly zone in the region to stop Iraq’s aerial bombing.

2003: The US invades Iraq on the pretext of the latter having nukes or WMDs (weapons of mass destruction). During the war, the Iraqi Kurds support the US. After the fall of Saddam Hussein, the Kurdistan region of Iraq attains limited economic independence.

2011: Syria’s Civil War begins. Kurds fight ISIS alongside the US, and bear the brunt. The Kurdish fighters hail from the PKK-aligned People’s Protection Units (YPG). ISIS, at this point, controls a vast area across Iraq and Syria.

2015: A new wave of violence is unleashed across Kurdish majority regions as the peace process between the PKK and Turkish republic breaks down. PKK-backed bombings hit Ankara and Istanbul.

2018: President Donald Trump issues a statement that hints at US withdrawal from the region. This announcement is met with backlash, given the move would abandon the Kurds who have been their loyal supporters in the fight against ISIS.

2019: ISIS loses most of its territory. Just months later, President Trump announces the departure of the US troops from the region.

The Primary Stakeholders In The Unfolding Crisis

Firstly, the Kurds. The recent years have witnessed the elimination of cultural and political boundaries between different Kurdish groups. Thus, a pan-Kurdish identity is now in the making with Kurdish people from Iran, Iraq, Syria, and Turkey.

The objective of a dream-nation, however, is more feasible in Iraq and Syria than in Iran or Turkey, given the weakened state of Iraq and Syria.

The Turkish onslaught is primarily aimed at preventing this and may see Kurds across the region responding violently.

Secondly, the Turks. For the Turks, the motivation to launch a campaign also stems from the idea of creating a safe zone between Turkey and Syria.

Turkey considers this buffer important for two reasons. First, it will render Turkey immune from any future invasion by the Kurds, who they see as terrorists. Two, the safe zone can be used to accommodate over 3.5 million Syrian refugees who are present in Syria.

For Erdogan, this safe zone matters, given that the issue of Syrian refugees is now taking a toll on his party.

This will also be a political issue in Turkey. The People’s Democratic Party in Turkey, which is dominated by Kurds, would want to raise the issue, especially when Erdogan finds his voter base faltering.

In the 2019 municipal elections, Erdogan’s party suffered losses, thus threatening the political base that Erdogan has built over the years. Already, the Turkish police have started rounding up Syrian refugees from various cities.

The proposed safe-zone on the Syria-Turkey border, reports suggest, would be 300 miles long and 20 miles deep, would be under Turkish control and would host around 3 million Syrian refugees. It would have more than 200,000 homes along with other amenities like hospitals, schools, mosques, and community areas.

Thus, for Turkey, this proposed safe-zone will be critical in shielding any threats that may arise from Kurdish groups.

Lastly, the Western powers, starting with the US. Though President Trump was quick to warn Erdogan against going ‘off-limits’, the question remains as to what action would qualify as off-limits.

Already, a Turkish onslaught, both on the ground and in the air, is underway in the region.

However, the greater fear in the West is that the SDF and Kurdish groups instrumental in capturing and imprisoning thousands of ISIS terrorists may lose control, or may even be tempted to release and use them against the Turkish onslaught. This would result in the resurgence of ISIS.

The area in question is home to over 760,000 civilians. If things go south in the next few days, the region could witness a humanitarian crisis.