Explained: India-China Stand-Offs In Ladakh And Sikkim, And What The Chinese Are Up To Along The LAC 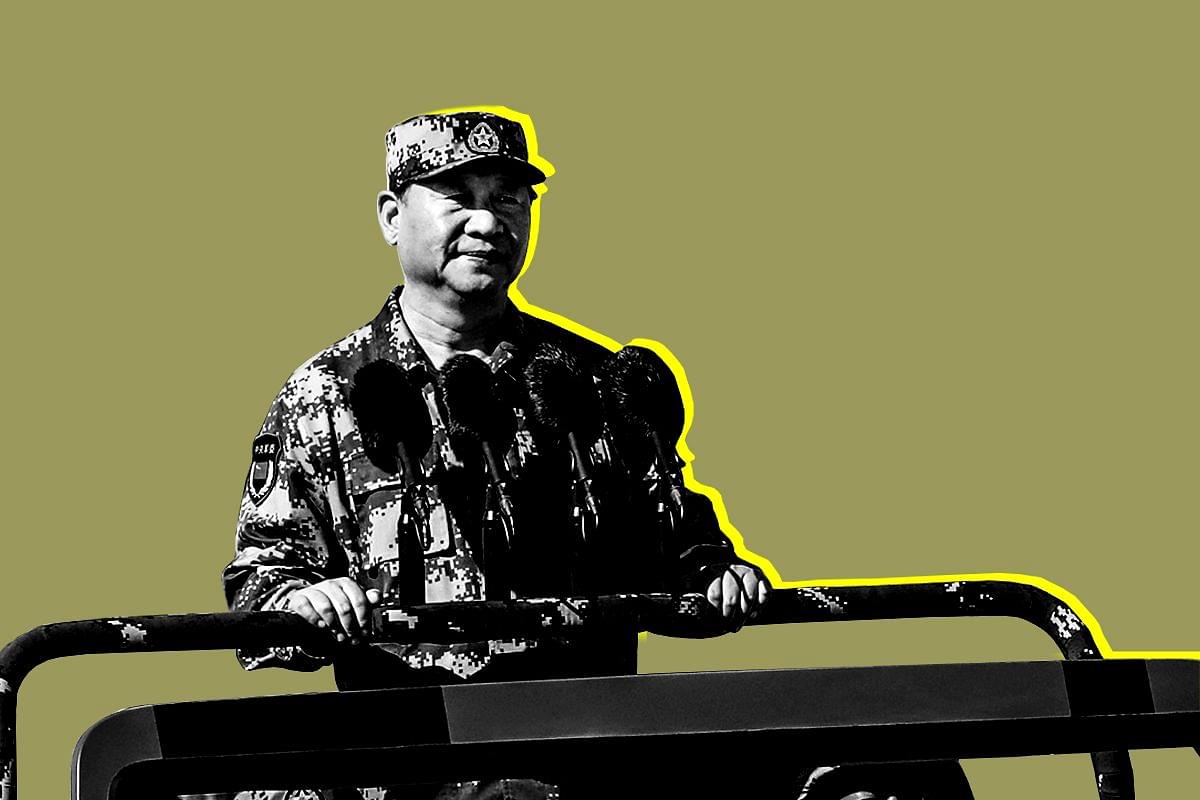 Last week’s intense standoff between Indian Army and China’s People’s Liberation Army (PLA) soldiers in eastern Ladakh and northern Sikkim is not the first such unarmed confrontation between the two sides, and will not be the last either.

Standoffs, minor and major, are quite a regular occurrence and most pass off peacefully. Only a few result in physical violence like what happened in the northern part of Pangong Tso lake in eastern Ladakh or at Naku La in north Sikkim.

Such standoffs occur since the 4,057-kilometre Line of Actual Control (LAC) is undemarcated and disputed. The dispute is largely because Beijing refuses to acknowledge India’s border with Tibet that was demarcated jointly (before 1947) by the British and Tibetan authorities.

China claims Tibet has always been an integral part of that country and the border demarcation agreed to by the British and Tibetans did not have the sanction of China’s rulers at that time. Beijing claims that many areas that were ceded by Tibet to British India and all those areas actually belong to China. India disputes that claim.

After the 1962 Chinese aggression (read this) and smaller armed conflicts along the inhospitable border till the early 1990s, India and China signed an agreement to maintain peace along the border in September 1993. This was followed up by another agreement to institute confidence building measures along the LAC in November 1996.

Another agreement to institute a working mechanism for consultation and coordination between the two sides on LAC affairs was signed in January 2012. As a result of these agreements, both sides follow some established protocols to resolve border conflicts and standoffs.

Both sides patrol the border, and such patrols are usually unarmed or soldiers carry only small weapons. As per protocol, in case they come face to face with each other, the weapons are to be immediately positioned in a non-aggressive posture with their nozzles pointed to the ground.

Since the unfenced and undemarcated border — it spans a wide variety of inhospitable terrain ranging from snow deserts, rocky terrain and vast sandy expanses with little vegetation — is disputed, patrols often enter areas the other side claims as its own. It is then that faceoffs occur.

Usually, when the two sides come across each other, they remain static in their positions and engage in what is known as ‘banner drills’. Such banners proclaim that the particular area belongs to India or China, as may be the case, and request the other side to leave.

The banners displayed by the Chinese are written in English and Hindi and the ones displayed by India are written in Mandarin and English. Most of the time, such banner drills last for a couple of hours and the soldiers end the faceoff after intervention of officers, usually of the rank of Major or Lieutenant Colonel.

However, at times, the Indian Army and PLA soldiers exchange angry words and abuses, push and shove, and pelt stones at each other. But such violent faceoffs are more of exceptions than the norm. And it is then the senior officers at the level of battalion commanders (Colonels) get involved and end the standoff.

As per protocol, the issue is then taken up at border meetings at designated places (Nathu La in East Sikkim being one) between brigade or even division commanders. Such meetings are generally cordial and both sides reiterate their respective claims over the area where the standoff or faceoff had occurred and agree to maintain the status quo.

But the Chinese always attempt, albeit often unsuccessfully, what is called ‘salami slicing’ — chipping away small portions of Indian territory very silently and surreptitiously. They do this by encroaching into areas that are unofficially considered to be Indian territory.

Once the Indian side gets to know about the transgression and sends its own soldiers, the usual faceoff occurs. The PLA soldiers eventually withdraw, but not fully. Since the border is undemarcated and there are very often no physical structures or formations to informally delineate the LAC, the Chinese do not withdraw fully into their territory.

“They retain a bit of the area they transgress into and it is very difficult to prove that. We then have to rely on maps and satellite imagery to show the Chinese that they haven’t withdrawn fully. This happens at the senior commanders’ level at the border meetings,” said a senior officer at Kolkata’s Fort William, the headquarters of the Army’s Eastern Command.

“At times, the Chinese do not agree and remain adamant. We can’t do anything then and accept the ‘salami slicing’ as a temporary fait accompli by them. But eventually and at the earliest opportunity, we send our own patrols and reclaim our territory,” said the officer.

It is, thus, a perennial cat and mouse game for vast tracts of inhospitable terrain where a single blade of grass is often difficult ṭo come by.

Had it not been for the gravity of the issue, this cat and mouse game could be viewed with a fair amount of hilarity.

Patrols that enter areas considered to be held by the other side often leave signs of their transgressions: empty cigarette packets, chocolate wrappers, and even pages of newspapers and books.

Indian patrols often come across such Chinese objects, and the PLA also complains of tell-tale signs of similar ‘transgressions’ by the Indian soldiers.

On the intervening night of 5 May and 6 May, Chinese troops objected to the presence of Indian soldiers at a disputed area on the northern banks of Pangong Tso, situated at a height of more than 15,000 feet. The two sides got into a heated argument that quickly degenerated into a brawl.

The Indian soldiers, led by a young Captain, stood their ground. PLA soldiers started pelting stones at the Indians and the latter responded in kind. Some of the soldiers also got into fist fights and half a dozen Indian soldiers, including the young officer, sustained injuries. About seven PLA soldiers were also injured.

The confrontation in North Sikkim happened at Naku La pass, situated at a height of more than 16,400 feet. Indian and Chinese patrol parties came across each other on Saturday morning. The Indian soldiers stood their ground and formed a human chain after Chinese soldiers tried to push them back.

As the standoff continued, reinforcements from both the sides arrived at the spot. The two sides engaged in fist fights and pelted stones at each other. Five Indian soldiers and seven PLA soldiers sustained injuries. The matter was resolved within a few hours after local formation commanders of both the sides spoke to each other.

While such faceoffs have occasionally turned violent in the Ladakh sector in the past, the last one happening in September last year, physical fights between the two sides have not been reported from Sikkim in recent years.

Sikkim is, unlike Arunachal Pradesh, not claimed by China. And that’s why patrolling by the Chinese along the LAC in the Sikkim sector is not offensive. But Pangong Tso in eastern Ladakh is coveted by the Chinese, who forcibly occupied nearly two-thirds of the 604 square kilometre lake in 1962.

The LAC cuts through the lake, but the two sides do not agree to its exact location. A 45-kilometre-long western portion of the lake is under Indian control now. Though the brackish water lake does not offer any major tactical advantage, it lies in the path of what is called the ‘Chushul approach’ — a pincer attack that the Chinese can launch from the north and south ends of the lake to launch an offensive into Indian territory.

In the 1962 war, China launched its main offensive through these two approaches. The Indian Army’s heroic battle at Rezang La, the mountain pass leading to Chushul Valley, was the subject of Chetan Anand’s 1964 film Haqeeqat starring Balraj Sahni and Dharmendra.

The Chinese have built all-weather motorable roads along the banks of the lake. In 1999, when the Indian Army unit stationed at Pangong Tso was moved to Kargil during the height of the conflict there, China took advantage and built 5 kilometres of roads inside Indian territory.

The network of Chinese roads in the area connect to the G219 Karakoram Highway. Chinese positions from one of these roads overlook Indian Army positions on the northern tip of Pangong Tso.

The Indian Army introduced high-speed patrol boats in the lake a few years ago, angering the Chinese who have responded by increasing the number of transgressions of late.

A major shift has happened over the past five years with India refusing to budge even in the face of aggressive Chinese posturing. The best example of India standing up to Chinese bullying was at Doklam in 2017 where a long standoff between the two armies led to the Chinese withdrawing from the Bhutanese territory they had occupied.