Fire, Fury And Nuclear Buttons: The Pursuit Of Peace In The Korean Peninsula 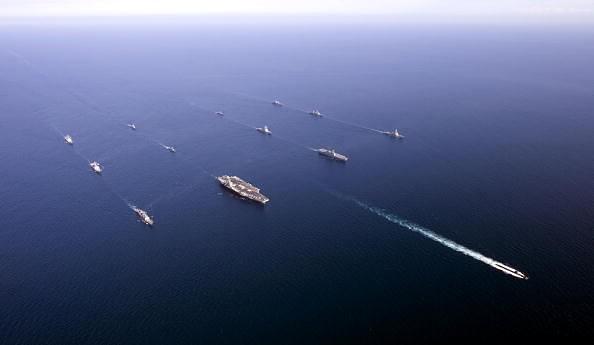 The issue between North Korea and the US is one such complicated equation. There are four other variables involved in the form of China, South Korea, Japan and Russia. However, with a dictator on the one side and a CEO pretending to be a President on the other, the equation, lately, has had a fraught existence.

Extending an olive branch to US President Donald Trump, Kim Jong-un surprised everyone by proposing the idea of a bilateral summit between the two leaders. Given no sitting president of the US has met a North Korean leader (Clinton was nine years late), the summit holds enough potential to correct the wrongs that today make a nuclear North Korea. However, given what is at stake here, a lot can wrong, too, spiralling into a global conflict.

The fact that even a minor skirmish between North Korea and the US will not cease without the involvement of foreign forces is no rocket science. There is a visible tendency in diplomatic circles to define the current scenario similar to what was witnessed in the Cuban missile crisis during the Cold War. This is far from correct, for during the crisis, both US and then USSR recognised each other as legitimate nuclear powers, and two, both John F Kennedy and Nikita Khrushchev realised what a nuclear war could amount to for the rest of the world, and hence wanted to negotiate a truce, which they eventually did within 13 days.

Trump and Kim, however, are two hotheads who have surrounded themselves with ‘yes-men’, thus making the presence of other variables necessary. Given how the US and Russia are embroiled in an expulsion spree within a diplomatic deadlock, and how the US and China are now embarking on a trade war to the bottom, Trump couldn’t have possibly chosen a worst time for the summit. Scheduled somewhere in May or June (as per latest reports), the summit must have room for a direct bilateral dialogue with the other variables as a catalyst.

The US and North Korea have walked the path of denuclearisation before, though in capacities different than what we see today. In 1994, Kim’s father, Kim Jong II, signed the ‘Agreed Framework of 1994’. The framework called for Pyongyang to freeze the operation and further construction of its nuclear reactors. The US, in return, promised the supply of two proliferation-resistant nuclear power reactors. An international collaboration called the ‘Korean Peninsula Energy Development Organisation’ (KEDO) also came into being. The 18-month long crisis, quite similar to what we have witnessed between Trump and Kim, came to an end with the 1994 framework.

The framework, however, did not provide for the inspection of nuclear sites in North Korea, leaving South Korea and Japan unhappy with the accord. Eventually, the framework broke down as the Bush administration decided to pursue its own policy. Naming Pyongyang as one of the ‘evil axis’ after the attacks of 9/11, the Bush administration further diluted the potential of any negotiations. The Obama years witnessed a ‘wait, watch, and contain’ policy, which, as evident, tremendously failed. Kim, alone, since ascending to power in 2011 has conducted over 80 missile tests and four nuclear tests.

The opacity surrounding ‘denuclearisation’ further complicates matters, for North Korea has not specified what it intends to do. While the US, China, Japan, and South Korea would hope for a complete, irreversible, verified denuclearisation of Kim’s regime, it would be foolish to expect Trump to achieve that in May itself. Alongside, it is also safe to assume that the fate of Muammar Gaddafi and Saddam Hussein would have inspired Kim to secure his nuclear programme, if not sustain it. For a regime that has spent decades mastering the science of nuclearisation, a reverse trend is not going to come too soon.

For both Trump and Kim, the summit could be a propaganda opportunity back home. Kim, who surprisingly enjoys better support than his father and grandfather, would want the US along with four parties to recognise North Korea as a nuclear state in its current capacity. Trump, with the midterms on his mind, would want to achieve the dream of a North Korea without a nuclear programme, something the last three occupants of the Oval Office could not. The opacity that surrounds the summit is a cause of worry, as misplaced expectations on either side could derail the summit before it even garners any momentum.

What is North Korea seeking? Clearly, the ship of Korean unification has long sailed. The mere idea of a united Korea would be unacceptable to South Korea for it will have to sacrifice decades of cultural and economic prosperity. The per capita income difference between the two states is too big to be bridged by aids and subsidies. Even with a $1.3 trillion in aid, a unified Korea wouldn’t have enough to bring the per capita income in the North at par with that in South. For North Korea too, a unified Korea poses a threat to the military leaders who have accumulated power in the long run. The idea of unified Korea can be be safely presumed to be dead.

For the Kim regime, survival is the primary priority, for it drove them to build a nuclear arsenal in the place. Having secured his regime, Kim can now focus on economic prosperity, food security, cultural enhancement, and even pop-shows, given he seems to have enjoyed one recently. The focus can be without the fear of the collapse of his own regime by external forces.

The South Koreans need the US, for they cannot depend on China alone to help them in the event of war. Even if China were to help, cities like Seoul and Busan would have already been wiped out before the dragon could roar. Thus, a nuclear North Korea would have to be complemented by the continuous presence of the US in the peninsula. As we saw last year, the state is willing to comply with the US, going as far as installing their anti-ballistic missile defence system, THAAD (Terminal High Altitude Area Defense) even if that irked the Chinese.

The Japanese, another party to this equation, has been pushing for a denuclearised North Korea too, for no state would want missiles flying over its islands. Enhancing their military capacities, much to the disarray of China, it is even considering to install the THAAD. While the Japanese are not considering a nuclear arsenal to counter the threat from North Korea, the depleting situation in the peninsula and plausible US restrain could enable them to consider the nuclear option. Quite like South Korea, they have been sharply critical of Kim’s nuclear misadventures.

Russia, however, shares a complicated relationship with North Korea. Being its second largest trade partner after China, Russia has periodically defied the economic sanctions against North Korea by the United Nations. Acting as the power broker in the region, like they have in the Middle East, the Russians interpret trade with North Korea as a means of developing their far-east region. Alongside, the trade also ensures that the Kim regime does not collapse under its own weight thus causing trouble in the vicinity of Russia, a fear shared by the Chinese too.

When Xi Jinping, the democratically elected emperor of China, hosted Kim, the former was helping his cause, for it must have used the bilateral discussions to set the agenda for the negotiations between Kim and Trump. Even while being North Korea’s largest trading partner, Chinese firms, from an economic standpoint, value their relationship with the US more. When it came to missile and nuclear tests, the consistent defiance of China also added to the sourness of their bilateral relations, which were supposedly at an all time low before Kim did a Bruce Wayne and ventured out of his mansion for the first time in seven years.

For China, there is no incentive in encouraging a nuclear North Korea. Hence, like South Korea, Japan and the US, they would want a complete, irreversible, and verified denuclearisation of the regime. This would enable them to plan their economic advancements in the Pacific region without having to worry about an imminent threat. Under Kim Jong-un, they would want the dictatorship to continue supplemented by a controlled democratic structure in the form of private players, free markets, and loosening of state control over essential commodities, eventually aiding a better lifestyle for 24-million North Koreans.

In what can be termed as a positive development, Kim has hinted on re-initiating the Six-Party talks. While complete denuclearisation of North Korea cannot be achieved in this decade, the Trump administration, in alliance with China, Japan, Russia, and South Korea can guarantee the security Kim craves for. Xi, with more than a plausible decade of power of ahead of him could be the broker in this deal, acting both as a guarantor and a facilitator between the US and the North Koreans. The focus must be on an inclusive strategy for North Korea, recognising it as a nuclear state without allowing it the licence to go rogue.

The emphasis must be on three key aspects; no new nuclear weapons, no enhancement of the current nuclear weapons, and no exports of technologies, knowledge, or any other commodities that aid the growth of nuclear programme elsewhere, particularly Iran. The knowledge pertaining to nuclear energy must be used to enhance the power generation potential of the regime. Inspectors from the International Atomic Energy Agency (IAEA) must be granted complete freedom to carry the checks. Also, the regime must be added as a signatory to the Non-Proliferation Treaty. The US and other parties in equation could respond with relevant air, eliminating sanctions, and opening up the regime for trade with partners in South East Asia. If things go too well, US may well consider reducing its personnel in the DMZ (Demilitarised Zone) and cutting down on military and naval training with South Korea.

The process must be swift, but not hastened. Given how delays in the implementation of the 1994 Framework wrecked the whole deal, Trump, along with the four parties, must secure the agreement in the next 12-18 months, even if it requires several diplomatic meetings.

If Trump wants the summit to succeed, he must work closely with Xi and Vladimir Putin. With China, the US administration must reach an agreement on the prevailing trade wars for tariffs will only lead to more tariffs. A strained US-China relationship caused by trade wars could be used as a bargain by the Oval Office, given how the Chinese firms value their trade with the US, but Trump wouldn’t be willing to go that far, given the $400 billion trade deficit he faces back home. With unconfirmed reports about Putin being hosted in the White House later this year, the two Cold War rivals must find a way to discard the mentality that constrained the world for five decades. For the rest of the world, a restrained but responsible nuclear North Korea will have to be the norm, for now.