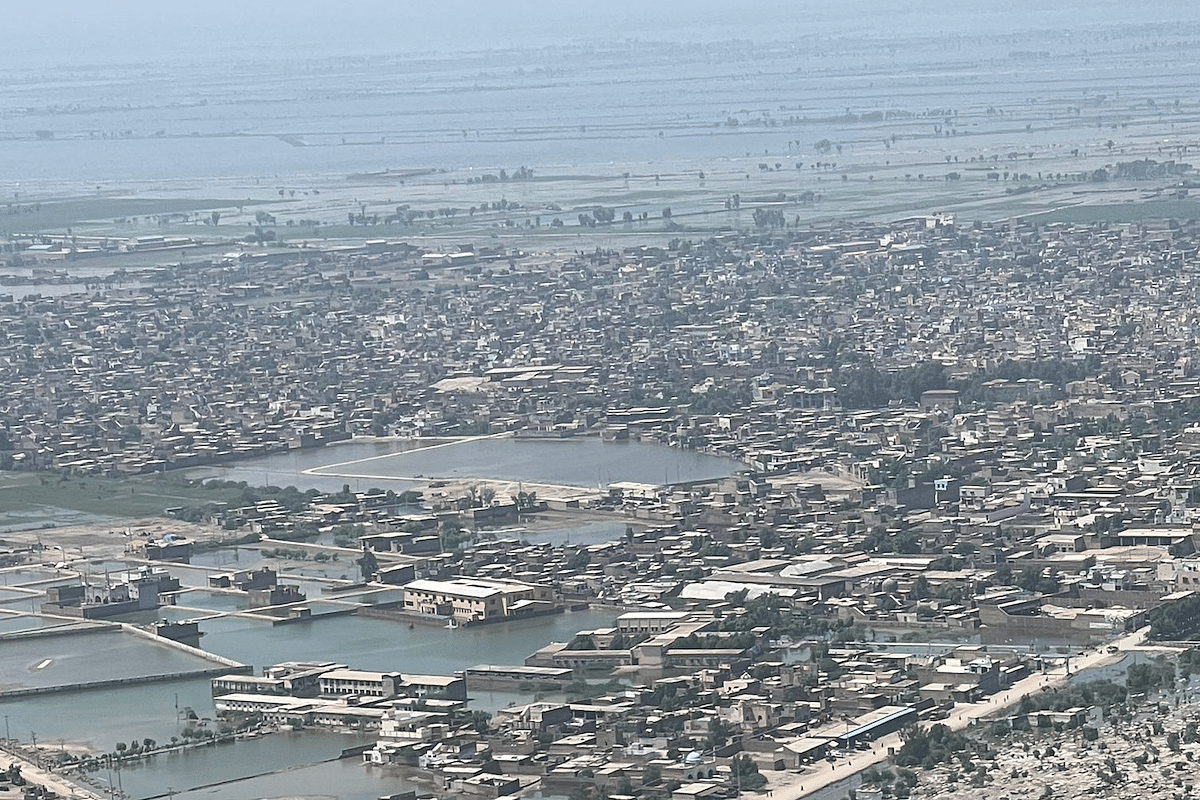 flood in Pakistan (Pic Via Wikipedia)

The massive losses from the catastrophic monsoon rains and floods in Pakistan, the war in Ukraine and other factors may force it to slash its GDP growth rate for the financial year 2022-2023 from five per cent to three per cent, according to media reports on Saturday.

Chairman of the National Flood Response and Coordination Centre (NFRCC), Major General Zafar Iqbal, during the joint briefing for Prime Minister Shehbaz Sharif and UN Secretary-General Antonio Guterres, said that at least one-third of Pakistan was inundated, while the overall damages would amount to over USD 30 billion.

The state-run Associated Press of Pakistan news agency quoted Iqbal as saying that Pakistan expected a two per cent cut in the Gross Domestic Product growth figure due to a combination of crises, chief among which were the floods, the delayed approval of IMF funds, and the economic situation emerging in the wake of the Russia-Ukraine war.

Separately, the Dawn newspaper reported that the minister said that while the ‘Super Floods’ in 2010 had affected around 20 million, the impact of the current flash floods had been felt by more than 33 million people across the country, of which over 0.6 million were housed in relief camps.

Mountain torrents proved to be a challenge amid a lack of efficient infrastructure to deal with the disaster, which resulted in heavy losses to human life, infrastructure, livestock, and crops, he said.

The NFRCC official said that coordinated efforts among civil government, military, and NGOs including the UN aid bodies were in full swing, adding that an assessment survey on relief operations in the provinces would start by Monday.

Meanwhile, the National Disaster Management Authority (NDMA) reported that the death toll from the deadly floods had climbed to 1,396, while the total number of injured stood over 12,700.

The cumulative number of homes damaged by flooding — either partially or fully — was over 1.7 million, while over 6,600kms of roads and 269 bridges had been damaged, according to the NDMA’s latest situation report.

Its data indicates that a total of 81 districts (32 in Balochistan, 23 in Sindh, and 17 in Khyber Pakhtunkhwa) remained categorised as ‘calamity-hit’.

Also, the UN Secretary-General Antonio Guterres, who is on the last day of his two-day trip to Pakistan, is expected to visit the flood-hit areas in Sindh and Balochistan provinces to review the ongoing rescue and relief efforts and the damages caused by the calamity.

On the first day of his trip, the secretary general met the Prime Minister and other officials and attended a briefing. He said on the occasion that Pakistan has little contribution to global warming but was massively hit by it.

Hence the international community should come forward to help it. Officials said record monsoon rains in the last three decades triggered massive floods destroying infrastructures and livelihood of millions of people in the rural areas.