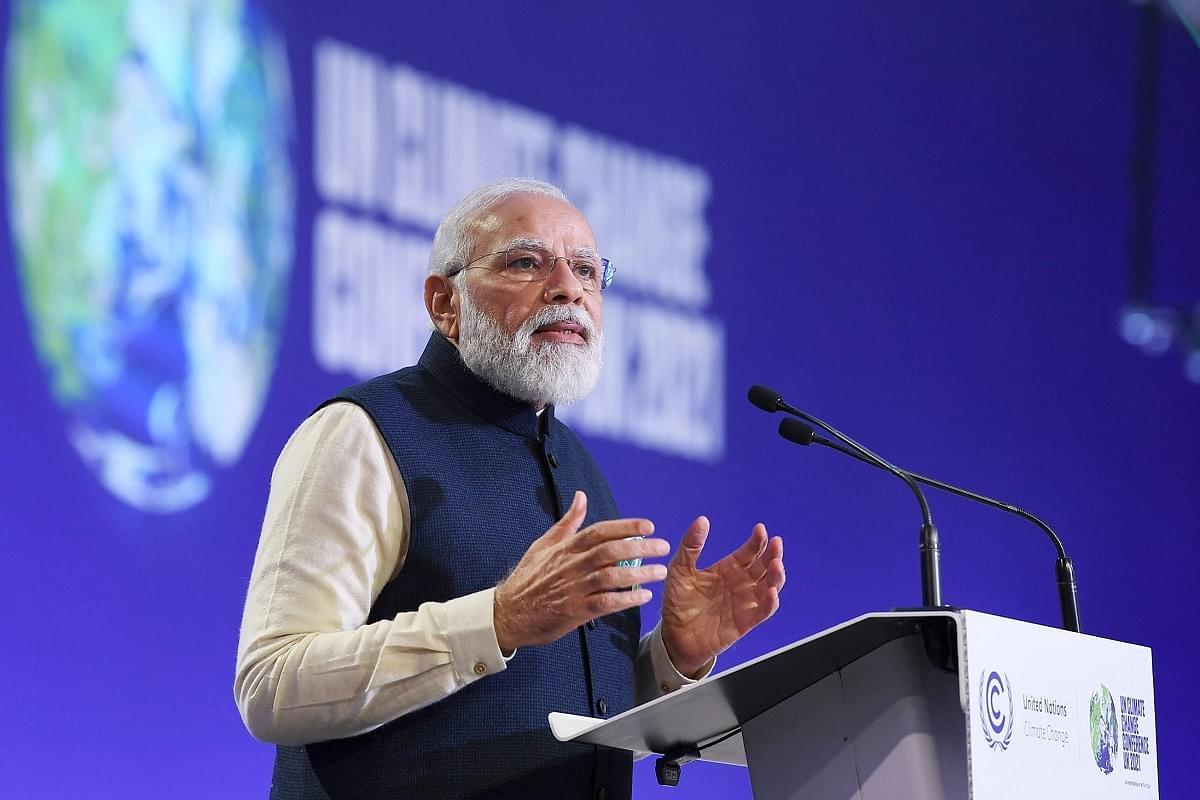 Global leaders have assembled in Glasgow to attend the 26th "Conference of Parties", a gathering of countries who signed the U.N. Framework Convention on Climate Change and the Paris Climate Agreement 2015.

The most immediate agenda for the world now is post-pandemic economic recovery and resumption of disrupted global supply chains. Climate change is one of the enduring concerns apart from terrorism and drugs menace on which countries have been struggling in the last few decades.

This leads to slow and steady melting of frozen water bodies, rise in sea level, threatening the very existence of many small countries. Primary sources of GHG are vehicular and factory emissions (using petroleum based fuels and coal) and dairy industry for milk and meat.

Industrially advanced economies have very high per capita GHG emissions and they have been pressing large, developing economies like China and India to slow down GHG emissions, which is difficult without funds and technology to switch to cleaner, greener, non-GHG emitting fuels.

USA, under President Joe Biden, wants to build international consensus around a target of countries committing to a ‘Net Zero Green House Gas Mission’ target by 2050.

The idea of Net Zero Green House Gas Mission refers to a balance between the amount of greenhouse gases emitted into atmosphere and the amount removed from it.

The Kyoto Protocol adopted in 1997 was a historic turning point when legally binding targets were agreed for industrialised countries to reduce overall GHG emissions.

Developed countries were required to reduce greenhouse gas emissions by at least 18 per cent below 1990 levels by the year 2020.

However, the second commitment period of the Kyoto Protocol that only commits entered into force in December 2020, just one day before its expiry.

These targets were rather modest, grossly inadequate to meet the main objectives of the UNFCCC but several developed countries backtracked and refused to take on any targets in the second commitment period.

The Net Zero idea is, strictly speaking, diluting the commitments agreed in the Kyoto Protocol adopted in 1997 and United Nations Framework Convention on Climate Change (UNFCCC) in Paris in 2015.

The developed countries have faltered on delivery of finance, technology transfer, and capacity building support to developing countries. They were supposed jointly mobilise at least $100 billion per year by 2020 to support climate change mitigation action in developing countries.

The new US administration has been pushing for net zero carbon emissions by 2050, under which a country compensates for the greenhouse gases it generates by making provisions for absorption and removal of an equal amount.

It is heartening to note that it is willing to honour the commitment agreed to by developed countries to assist developing nations by $100 billion annually so as to facilitate transition towards climate-friendly technologies.

India has demonstrated a strong political commitment and leadership position on climate issues and achieved remarkable progress so far in meeting Nationally Determined Contributions (NDCs) under the Paris Agreement.

India is the only one among the G20 group of countries expected to meet the targets that it set for itself in Paris.

In 2015, India announced a target of 175 GW of installed renewable energy capacity by 2022 (excluding large hydro), which included 100GW of solar and 60GW of wind energy capacity.

The world’s largest renewable energy expansion programme is going on in India — a target of 175 GW by 2022 has been set.

Solar tariffs in India are very competitive and achieved near grid parity. We are the world's third largest producer and third largest consumer of electricity.

The overall profile of installed generation capacity is 61.5 per cent — thermal energy at 12.2 per cent, hydroelectric energy at 24.5 per cent and renewable energy (wind/solar) about 37 per cent.

India will reach 40 per cent renewable energy capacity well before 2030, as per targets accepted under the 2015 Paris Climate Change agreement.

India’s goal of operationalising 450 GW of renewable power is a major contribution to check emission of greenhouse gases.

All this when India is least responsible for greenhouse gases (GHG) emissions. US has contributed the maximum to the emission of GHGs, followed by EU and China.

India’s carbon footprint is extremely low. Pressure on India and China to reduce carbon emissions reminds one of an irresistible analogy: When drinks are in short supply, heavy boozers become apostles of Alcoholics Anonymous to dissuade neo-boozers. [Alcoholics Anonymous is an international NGO founded in 1935, two years after the end of prohibition in the United States in December 1933. Its primary purpose is to help alcoholics "to stay sober and help other alcoholics achieve sobriety.]

Dire predictions were made in the report of the Intergovernmental Panel on Climate Change (IPCC) about global warming due to incessant carbon dioxide emissions and got the ears of top leaders assembled in Paris in 2015 with India taking a lead role.

The IPCC, in its Fifth Assessment Report (AR5) published in 2014, had observed that there had been an increasing trend in the emissions of GHG since the advent of the industrial revolution, with about half of the emissions occurring in the last 40 years.

The risk of climate change is largely a function of total cumulative GHGs in the atmosphere. IPCC had estimated that for temperature increase to remain below 2°C of pre-Industrial Revolution levels, the world must cap emissions at about 2,900 giga tonnes (Gt) of CO2 from all sources from the industrial revolution till the year 2100.

Of this, the world had already emitted 1,900 Gt of CO2, by 2011, thus already consuming around two-thirds of this ‘carbon budget’.

Despite rather low per capita GHG emissions, India is making big advances to switch to greener energy.

Switching from coal-based power plants to solar, hydro, and nuclear is not easy, and renewable energy, especially solar and hydro, cannot offer a reliable 24x7 power supply at steady voltage.

India has nevertheless made some major, specific commitments in Glasgow, one long-term and one shorter-term.

According to World Resources Institute, India’s total greenhouse gas emissions was about 3.3 billion tonnes in 2018 and it is projected to rise above 4 billion tonnes per year by 2030.

It means at current trends, India could be emitting anywhere between 35 to 40 billion tonnes out of which a cut of 1 billion tonnes would represent a reduction of 2.5 to 3 per cent in its absolute emissions in the business-as-usual scenario.

India is all for saving the planet without inhibiting her own economic growth, and at the same time ensuring other countries walk the talk on countering climate change.