India And UAE: A Partnership Against Terrorism 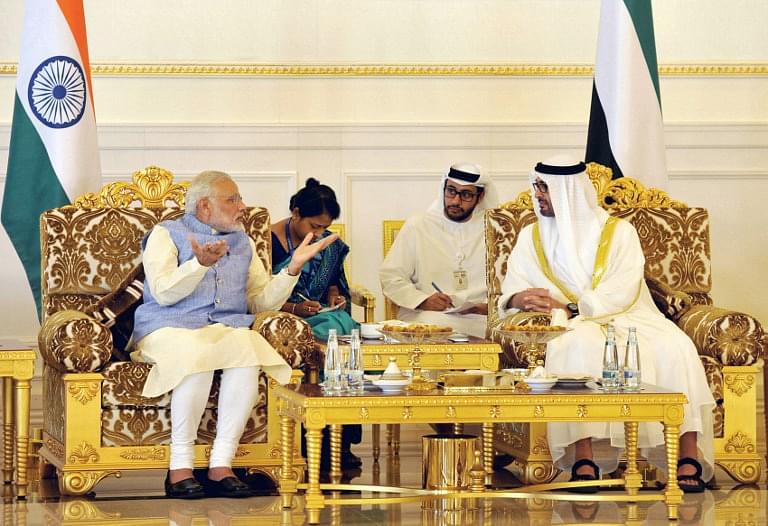 The UAE  has been a commendable partner in helping India nab terror operatives. It can now further complement New Delhi’s anti terror efforts

The business community will of-course watch out for the economic deals he bags. But another factor that will decide whether his UAE policy is a hit or a miss is how Mr Modi leverages India’s security partnership with Abu Dhabi.

As India recovers from recent terror attacks such as the one in Gurdaspur and prepares a strategy to battle the slowly building trend of youth radicalization, Abu Dhabi will be one of its most important partners.

A long time signatory of security treaties ranging from agreements on extradition, mutual legal assistance in criminal and civil matters, combating trafficking in narcotics and information cooperation, the UAE has been a commendable partner in assisting India in its anti terror pursuits.

Abu Dhabi has extended exemplary support especially in nabbing operatives belonging to the Indian Mujahideen (IM), a widely known terror group with close links to the Lashkar-e-Taiba (LeT) and the Student Islamic Movement of India (SIMI).

The IM has been responsible for the Varanasi bombing in February 2005, the Mumbai train bombings in 2006, serial bombings in Ahmedabad and Delhi in 2008, and the attack on the “GermanBakery” in Pune in 2010.

Many of its key operatives like Assadullah Akthar and Yasin Bhatkal had been in hideouts in the UAE. With the help of successful intelligence sharing on terror outfits, the UAE helped Indian agencies bring back home both Akhtar and Bhatkal.

Earlier Indian intelligence also arrested the alleged IndianMujahideen Abdul Sattar who had escaped from India in 2007 to the UAE via Karachi.

Late last year the country banned a list of 86 terror outfits including Pakistan-based groups such as Haqqani network, Pakistani Taliban, the LeT and most importantly the India Mujahideen (IM).

Interacting or engaging in any way with any of the banned outfits by any individual was declared a criminal offence by the UAE authority.

Analysts feel India has particularly benefited from the ban on IM as it meant choking off the outfit’s finances. As per reports IM’s largest remittance comes from the funds it is able to raise through sympathizers in the UAE.

The timing is particularly important for India to deepen its anti terror cooperation given the UAE’s recent aggressive crackdown on terrorism and religious extremism.

Abu Dhabi recently passed an “anti-hate law” makes any act, related to hate crimes, discrimination, extremism, especially ones where Sunni Islamist groups target people of other faiths calling them “infidels”, punishable.The law, decrees “terming other religious groups or individuals as infidels or unbelievers” a punishable offence with jail term ranging from six months to over 10 years.

A part of the US-led coalition in Syria, Abu Dhabi is also cracking down on outfits that promote Daesh ideologies. It recently announced the trial of 41 people for allegedly involving in a plot to establish Daesh-style caliphate.

The country also launched a new counter-terrorism centre in Abu Dhabi to fight Daesh’s online propaganda and recruitment. The initiative, named the Sawab Centre, has coalesced with 63 counties including the US.

The Center seeks to neutralize Daesh’s doctrine of hate and intolerance by putting forth the voices of religious leaders, organisations, businesses, and youth that will highlight the more moderate version of Islam one that truly values the idea of diversity.

Communicated through social media, the Center, attempts to particularly reach out to the vulnerable online communities who easily buy into the propaganda of Daesh recruiters.

Much of this seems to be in resonance with the slowly growing trend of radicalization in India.

Though lauded for keeping the extent of youth radicalization fairly low compared to the rest of the world, India has been warned by Intelligence agencies to chalk out a counter plan to fend off potential threat.

In fact the Home Ministry earlier this month convened a discussion on neutralizing the attraction of the youth to radical ideologies promoted by the Islamic State (IS). As per reports some 25 youths in India are said to have been lured to the IS ideology while about 17 from Telangana have been prevented from travelling to Syria to join the war.

In fact Oman earlier this year had sounded an alert to the Indian Government over radicalization of Indian Muslim youth working in the Gulf nation.

Obviously there is a convergence of objectives and it will make more sense for India to work with a broader base of partners than going it all alone.

Additionally there are some interesting geopolitical developments in the region especially between Pakistan and the Arab nations over Islamabad’s decision to stay neutral on the escalating crisis in Yemen.

Interestingly, the UAE-Pakistan relation has been quite cozy with a significant volume of bilateral trade and consistent UAE aids to Pakistan’s development and humanitarian needs. The recent war of words have prompted many observers to ask whether this will lead to a situation of mistrust between old friends?

Whether or not it does, New Delhi’s job will be to keep a close watch on the future developments. Agility and deftness in using changing equations in the Middle East will help shield India’s national security interests, especially given the slightly volatile situation on the Pakistan border.

Jhinuk Chowdhury is a freelance journalist who writes on South Asian affairs. Her twitter handle is @jhinuk28
Get Swarajya in your inbox everyday. Subscribe here.
Tags: