A Slew Of Setbacks For India In The Neighbourhood 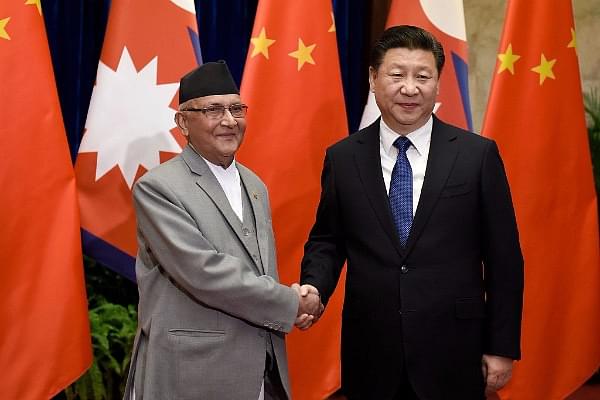 A few developments in India’s immediate neighbourhood over the past few days that have been largely overlooked by the media and foreign policy commentators spells big trouble for our country. And the developments are also a grave reflection of the failures and shortcomings of our foreign policy establishment arising out of its obsession with Pakistan and the West to the extent of investing little time and attention to our other neighbours.

The most important of these developments, and the one that will prove to be a very tough challenge for India in the months and years to come, is the victory of the communists in the federal and provincial polls in Nepal. South Block (housing India’s Ministry of External Affairs) was caught completely unawares by the virtual coup that China had staged in Nepal in early October by getting the Communist Party of Nepal-Unified Marxist Leninist (CPN-UML) and the Communist Party of Nepal-Maoist Centre (CPN-MC) to form an alliance. Beijing had worked silently behind the scenes to broker the alliance and had stumped New Delhi.

What came as a shock for India was that the CPN-MC was part of an alliance with the Nepali Congress (NC) that was ruling the country. This alliance, formed after the two communist parties broke ranks last year, was seen to have had the blessings of New Delhi. CPN-UML chief K P Sharma Oli, an incorrigible India-baiter, had blamed New Delhi for brokering the NC and CPN-MC alliance that had led to his government losing majority and his consequent resignation as prime minister in July last year. Oli is seen as a leader extremely close to China and has, in the past, worked actively to further Chinese interests in Nepal and to exclude India from his country.

With Oli set to become the prime minister of Nepal, and with India’s traditional friend, the NC, faring very poorly in the polls, the Himalayan country will surely move quickly into Beijing’s sphere of influence. Oli will, as he had done in the past, try to exclude the Madhesis from the country’s power structure. That, he knows, will provoke a counter-reaction from India because the Madhesis share very close kinship with people of eastern Uttar Pradesh and Bihar. And such a counter-reaction from India will strengthen anti-Indian sentiments among the hill people (the non-Madhesis) in his country and help him move Nepal closer to China.

This was exactly what had happened when Oli sought to cut out the Madhesis from the country’s power structure and angry Madhesis imposed an economic blockade that led to crippling shortages in Nepal and brought that country to the brink of a grave humanitarian crisis. Oli blamed India for the blockade, visited China and signed deals for sourcing petroleum products and other essentials from China. Oli is also expected to facilitate Chinese investments, to the exclusion of India, in Nepal and allow China a much greater say in shaping Nepal’s destiny. It is a different matter that Nepal will ultimately end up as a client state of China.

China has also increased its influence over both Myanmar and Bangladesh by its imaginative handling of the Rohingya crisis and brokering an agreement between the two countries for the repatriation of Rohingya refugees. Myanmar had been getting close to Delhi after it realised that Chinese investments in the country come with a heavy price to pay. The Myanmarese leadership was also wary of China’s machinations in Myanmar’s insurgency-infested northern areas bordering China, given that China has close links with the Northern Alliance (a collective of four rebel groups). It was thus seeking to get closer to India to counter Chinese influence.

China has also invested billions of dollars in Myanmar, but some of those investments ran foul thanks to China’s overbearing approach and imposition of unfair terms and conditions. Myanmar’s military junta cancelled some of those projects, including a mega $3.6 billion dam. Myanmar also cancelled a proposed 1,215-kilometre rail link between Kunming (capital of Yunnan province) and Rakhine state (in western Myanmar). Large scale public protests and allegations of opacity and corruption preceded the cancellations.

But western criticism of Myanmar over its handling of the Rakhine state crisis triggered by the attack by Arakan Rohingya Salvation Army, a jihadist group with close links to Islamist terror outfits and Pakistan’s Inter-Services Intelligence, on Myanmar police and army camps has pushed Myanmar close to China over the past few weeks. Myanmar state counsellor Aung San Suu Kyi, who India supported fully during the rule of the military junta in that country, has visited Beijing twice this year, as has its senior most army general. What would be galling for India is that Suu Kyi was, during her incarceration by the military junta and after, very critical of China’s close ties with her country’s generals.

But China has successfully managed to woo her, and the foreign office mandarins in New Delhi have none but themselves to blame for it. Chinese Foreign Minister Wang Yi was the first foreign leader to visit Naypyidaw (Myanmar’s new capital city) in early April after Suu Kyi’s National League for Democracy won the country’s election. India’s Sushma Swaraj followed only a few months later, by that time China had already made considerable progress in building close ties with Suu Kyi, who chose China (over India) as the first country to visit after her party swept the polls. Two weeks ago, during her second visit to Beijing in three months, Suu Kyi pledged to take her country closer to China.

China, while retaining the goodwill of Myanmar’s rulers by refraining from joining the Western chorus of criticism of Myanmar over the Rakhine state crisis, also played a fine balancing act with Bangladesh, which has been overwhelmed by the influx of over six lakh Rohingya refugees from Myanmar’s Rakhine state. Bangladesh has become a fierce critic of Myanmar over its discrimination against Rohingya Muslims with who Bangladesh has close ethnic ties. But Beijing has managed very well not to anger Bangladesh with its overt support to Myanmar’s leaders who, Bangladesh (and the rest of the Islamic world as well as the Western countries) feels, have initiated the ‘ethnic cleansing’ of Rohingya Muslims from Rakhine. Getting Bangladesh and Myanmar to sit across the table and reach an agreement on repatriation of the Rohingya refugees sheltered in Bangladesh was a masterstroke of Chinese diplomacy.

New Delhi, on the other hand, botched its handling of the Rohingya crisis. It earned no little criticism by unnecessarily publicising its decision to expel the 40,000-odd Rohingyas, who had illegally entered India over the past few years. And India’s diplomatic establishment shied away from engaging with Bangladesh very actively in resolving the Rohingya issue. As a result, Bangladesh was none too happy with India while Myanmar saw in China a much more dependable friend, which would not only shield it (Myanmar) from global opprobrium, but also help it resolve the internal crisis in Rakhine.

After the Doklam standoff earlier this year, Beijing has aggressively stepped up its efforts to gain influence over Bhutan. Since Bhutan cannot directly establish ties with any country as per the terms of a friendship treaty with India – this is becoming a sore point with Bhutan’s increasingly assertive younger population – China has been deepening its public diplomacy with the Himalayan kingdom. China is spending millions of dollars in organising conducted tours for students, scholars, college and university teachers, youths, young professionals, government officials and politicians from Bhutan. It is thus building up a growing and powerful constituency of young people favourably disposed towards China and who are in awe of China’s economic and military might.

India has been parsimonious on this count, choosing instead to strengthen its military presence in Bhutan. India’s military presence in Bhutan is also being viewed with increasing unease by the younger lot of Bhutanese. The Indian foreign policy establishment needs to realise that investing in public projects and projecting the country’s soft power should be priority areas. India also needs to start wooing Bhutan’s growing younger population and counter China’s influence over them. A lot of tact and imagination is required in this, and India’s diplomats have been sadly lacking in both these traits.

Earlier this week, Sri Lanka formally handed over the strategically-located Hambantota Port (in southern Sri Lanka) to China for 99 years. China became the exclusive owner of the port and large areas in its hinterland. According to reports, China will set up a strong naval base and will also construct an airfield where it may station its fighter jets. China’s explanation is that the naval base in Hambantota will help it secure vital sea lanes across the Indian Ocean. By default, China will establish its presence in the Indian Ocean Region in a big way. Beijing will also justify stationing its army and air force at Hambantota.

This development in Sri Lanka, and a few more steps by the incumbent government of President Maithripala Sirisena, who was perceived to be more sympathetic to India’s concerns than his anti-Indian and pro-China predecessor Mahinda Rajapaksa, has come as a considerable setback for India. Here again, New Delhi has only itself to blame. India committed a lot to Sri Lanka’s present dispensation, but bureaucratic and other hurdles have come in the way of those promises being delivered. China, with deeper pockets and a sure-footed diplomatic establishment, has outwitted and outmanoeuvered India in Sri Lanka as well.

Hambantota is not the only port that China will have a naval and military presence in. It will soon get a majority (probably around 85 per cent) controlling stake in Kyaukpyu port in Myanmar’s western Rakhine state. Once that happens, China will surely station its navy at the port and will thus gain a presence in the Bay of Bengal. Kyaukpyu is about 700km north of Andaman and Nicobar Islands, which hosts India’s tri-services command.

These developments should set alarm bells ringing in India’s diplomatic and military establishments. By establishing its military presence in Myanmar and Sri Lanka, and with its heavy deployment of its People's Liberation Army in Tibet to the north of India, China’s encirclement of India will be complete. Apart from Pakistan, China’s footprints in Nepal, Bhutan, Myanmar, Bangladesh and Sri Lanka have increased exponentially in recent times even as India keeps on obsessing with Pakistan and issues like entry into the UN Security Council and the Nuclear Suppliers Group.

New Delhi has to completely change its outlook and approach towards its neighbours and start wooing them aggressively if it is to avoid the peril of being reduced to a bit player in its own neighbourhood. Apart from structural changes, India’s diplomatic establishment also needs to be infused with fresh vigour and ideas.