India Has A Rocky Past With The Rajapaksas, But Gotabaya’s Visit May Set The Right Tone For Delhi-Colombo Ties 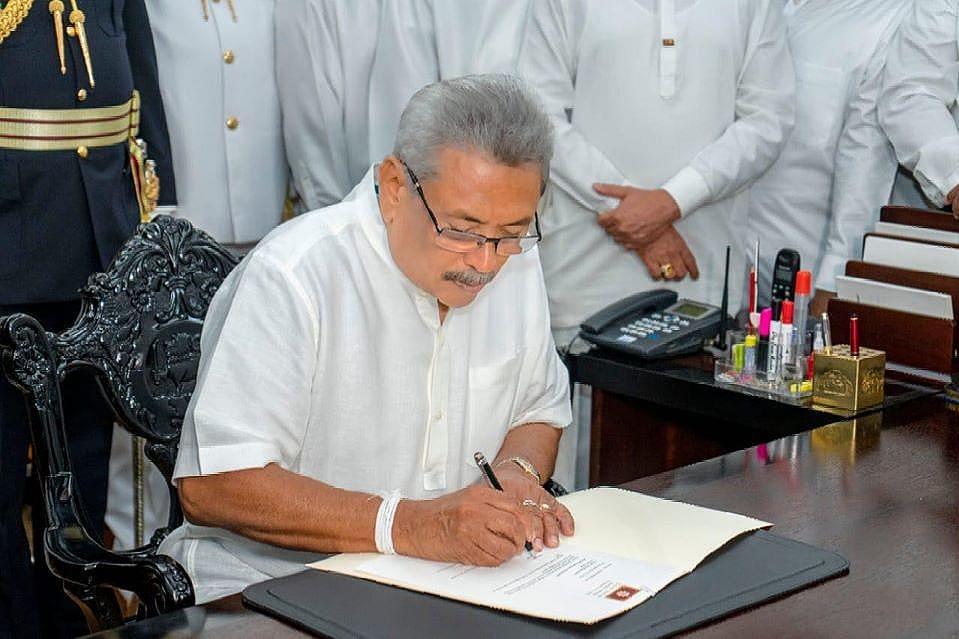 Ahead of his visit to New Delhi on 29 November (Friday), Sri Lanka’s new president Gotabaya Rajapaksa is amply clear that he would not want to disappoint India in any way.

Though Gotabaya’s election is causing concern for political parties in Tamil Nadu, the Narendra Modi government at the Centre has been optimistic on the latest Sri Lankan development.

Prime Minister Modi was among the first to welcome Gotabaya’s election and lost no time in calling him up over the phone. Expressing confidence that Sri Lanka will progress on the path of peace and prosperity, he extended an invitation to the new Lankan President to visit New Delhi at the earliest.

Gotabaya not only accepted Modi’s invitation but also expressed his readiness to work with India to ensure development and security in the region.

In an interview to an Indian website Bharat Shakti, Gotabaya made it clear that his government would not do anything that would threaten India’s security.

A pertinent point that he made during his interview to the Indian website was that the security and economy of Sri Lanka are his ‘top’ priorities.

In particular, he pointed to the failure of the security structure under former president Maithripala Sirisena and said intelligence gathering has to be streamlined.

Political parties in Tamil Nadu are worried over Gotabaya’s ascendancy because he was the Lankan Defence Minister when the Liberation Tigers of Tamil Eelam (LTTE) was wiped out and its supremo Velupillai Prabhakaran killed.

(Probably, it was because of Gotabaya’s election that social media, especially in Tami Nadu, paid tributes to Prabhakaran on his birthday yesterday — 26 November.)

In fact, a section of the media, particularly in Tamil Nadu, began scaremongering even before Gotabaya could be elected, saying his election would bring his entire family into power and lead to the annihilation of the Lankan Tamils.

No doubt, the Sri Lankan Tamils are worried over his election and they didn’t vote for him in the election. There are charges against Gotabaya of abusing human rights in the offensive against the LTTE but he has denied them.

The United Nation Human Rights Council has asked Sri Lanka to conduct a credible investigation against the war crimes, but that has not happened so far.

Soon after being sworn in, the new President, acknowledging he was supported by the majority Buddhists, pleaded to minority Muslims and Tamils to rally around him and build one Sri Lanka. He also said that all Sri Lankans are part of the country's new journey.

A big reason for Gotabaya’s election has been the Easter blasts that rocked Sri Lanka on 21 April this year in which over 250 people were killed. The blasts have convinced the Sri Lankans that they need a strong leader who can put down the hardliners and terror supporters.

Nicknamed “The Terminator” by his own family, Gotabaya was seen by Lankans as the better choice to tackle the country's problem of terrorism and extremism than his opponent Sajith Premadasa.

One of Rajapaksa’s supporters has been quoted by The New York Times saying that Sri Lanka “needed a Modi after Easter attacks”.

A section of international analysts feel that Gotabaya’s election could be a setback to Indo-Lanka relations and that China would gain an upper hand in the region.

But Gotabaya himself has played down such fears, saying Sri Lanka wouldn’t want to do anything that will threaten India’s security and his government’s involvement with China was “purely commercial”.

The Lankan President has said that he will follow a “neutral foreign policy” and has made no bones that it was a mistake of the previous government to have entered into an agreement with China to lease the Hambantota port in southern Sri Lanka for 99 years.

Though it was during Gotabaya’s brother Mahinda’s regime that Sri Lanka went in for a deal with China for the construction of the Hambantota port, the previous government converted its debt to Beijing into equity for the port holding company.

That led to a longer lease of 99 years of the port. Also, the Sirisena government availed of another $100 million loan from China. More importantly, when Sirisena objected to the conversion of Hambantota debt into equity, China smartly cleared $300 million aid to projects of his choice.

The Pakistan media was among those who were the first to welcome Gotabaya’s election with glee. Some have even termed his election as a ‘setback’ to India. But probably, these people are either ill-informed or are not aware of Lanka’s current compulsions post-Easter blasts.

During the run-up to the elections, there were reports of how Gotabaya was urged to make Sri Lanka safe again. In this context, the Lankan President’s statement that he would streamline intelligence gathering is a point worth noting.

Much before the Easter blasts, Indian security agencies had alerted the Sri Lankan security authorities of the threat. But the Lankans took the alert lightly, leading to the ghastly blasts.

It is in this context that Sri Lanka would look more to India than to any other country for help.

Also, the Indian National Investigation Agency (NIA) has more leads on the run-up to the Easter blasts, which puts the Modi government at an advantage over the others.

The agency gathered the evidence while investigating the activities of a group in Tamil Nadu for their links to terrorism in Sri Lanka.

NIA has busted Islamic State of Iraq and Syria (ISIS) cells in South India that had nexus with terrorist elements in the region. These elements had plans to attack states such as Kerala and Tamil Nadu.

The other problem for Pakistan is that Sri Lankans are convinced that Islamabad had a hand in the blasts that shook Colombo on Easter day.

The blasts were triggered by those who had links with Pakistan-based terrorists, and a drug cartel in Islamabad was also involved.

Gotabaya’s election is seen as the triumph of anti-Islamic sentiments in the island nation and he cannot be seen going against that mandate, particularly when the security of his nation has been endangered.

Therefore, it would not be wise on the part of Pakistan, its government and media to term Gotabaya’s election as a ‘setback’ to India.

A scrutiny of Indo-Lankan relations shows that the Rajapaksas have never been against India.

In November 2014, Mahinda Rajapaksa, who was then the president, had released Indian fishermen, particularly from Tamil Nadu, detained by Lanka for transgressing the International maritime boundary. It was something the previous United Progressive Alliance of Manmohan Singh could never achieve.

Mahinda told the South Asian Association of Regional Cooperation (SAARC) summit in Kathmandu on 27 November 2014 that the fishermen were released due to Modi’s foreign policy. Modi and Mahinda had also held talks in New York in September 2014.

Gotobaya has worked with Indians during 2008-09 when the Lankan war with the LTTE entered a crucial stage. He was part of a three-member team that kept the Indian security officials updated with the developments.

That experience of having worked with Indian officials could now pay handsomely for the Lankan President.

So, as Indian authorities roll out the red carpet for his visit to New Delhi, they can expect the Lankan President to be more willing to coordinate and work with them for the region’s security and safety.

On the other hand, it would be only wise on part of India to realise Lankan ‘commercial interests’. Neither does New Delhi nor its good friends in the West, including the US, are offering Sri Lanka the amount of money that China is for its projects.