India To Elect ‘Right’ Like Israel: What Narendra, Netanyahu Have In Common 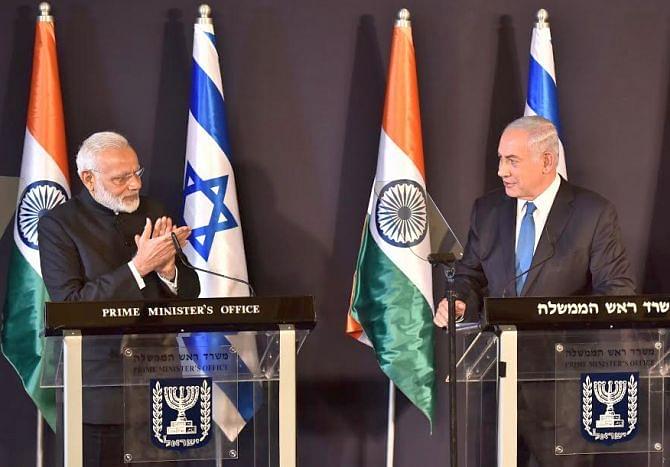 Israel went to the polls on 9 April and India followed it two days later in its multi-phase, five-week-long format. Though the dates are an interesting coincidence, the two demonstrations of universal adult suffrage have a powerful common theme running through them - in Israel as well as in India, the central issue in these elections is the personality and character of the incumbent Prime Minister.

Prime Minister Benjamin Netanyahu declared early elections after his ruling coalition collapsed at the end of December 2018 over disagreements on a bill that would abolish the exemption and require the haredim to serve in the Israel Defence Forces like all other citizens. An electoral campaign this year, however, was inevitable as the Netanyahu administration's term was set to expire in November anyway.

What also surrounded the announcement of elections was the shadow of corruption charges against the Prime Minister - Netanyahu is facing indictment in three corruption cases on charges of fraud, bribery, and breach of trust. If convicted on all counts, he could face up to 13 years in prison and a fine.

Additionally, Israel is no stranger to the global backlash against liberalism. The country has for long been at odds with the international-American-Jewish diaspora over several issues of identity such as women at the Kotel, the Orthodox Rabbinate's monopoly in the personal sphere (marriage, divorce, burial, conversion, kashrut, olim, etc), as well as over policy such as towards the Iranian nuclear programme, Gaza, and the Arab inhabitants of Judea & Samaria. However, these differences over identity with the diaspora go back much further than the Netanyahu administration or even the foundation of the State of Israel.

The key question for Israel's elections, therefore, was the personality and character of the Prime Minister. Even critics of the current administration agree that the economy is doing well, tourism is booming, and Netanyahu has handled his relations with world leaders admirably, balancing ties with Donald Trump and Vladimir Putin, reaching out to some of the Arab states in the region, and opening up more of the world to Israel. Most importantly, no one in Israel, left or right, has a better solution to the intractable problem of Palestinian intransigence on the peace process or Iranian ambitions towards regional hegemony, than him.

Predictably, the Opposition's core message during their campaign was that they were not Netanyahu; on everything else, they closely echoed existing policies. Ultimately, this was not enough to swing the Israeli voter away from a known figure to a coalition of, at best, imitators, and at worst, unknowns.

India's elections indicate a similar stamp. As in Israel, India's economic and security indicators are generally as healthy as can be expected though things can always be better. For all the arguments around the policies of the Narendra Modi government, the core issue most people are voting on is identity. Modi is seen, rightly or wrongly, as the face of a resurgent Hindu nationalist identity that could transform the Indian republic. To his detractors, Modi will never escape the ghosts of the riots in the aftermath of the Godhra train burning incident in 2002.

Interestingly, many of the Indian Prime Minister's supporters are more lukewarm about his identity agenda - because they only see symbolism in place of action over the past five years - than his critics are vociferous in denouncing it. Regardless, although conversations in India are ostensibly about economics, security, and other issues, most soon collapse to the Sangh Parivar's idea of India. The battle for India's soul, like in Israel, goes back much before the current administration. Yet the Modi government has been by far the most powerful voice for an alternative vision of the India republic. The Indian Opposition, as in Israel, has little by way of new ideas to challenge the incumbent's narrative of development or security. The platforms of the various parties seem to be largely lifted from socialist tracts of the 1960s that have failed several times before, interspersed with a dose of the contemporary politics of victimhood. There is little clarity on India's greatest security threats - cybersecurity, intellectual property warfare, terrorism, China, or Pakistan - except to say more of the same. While the Modi government has not necessarily distinguished itself on these fronts, the alternative offered is a recipe that has been tried before and found wanting.

The victory of the religious Right coalition was a foregone conclusion in the Israeli elections though how well Likud would fare, especially if the attorney general issued the indictments against Netanyahu, was up for debate. In the final outcome, the Likud emerged the largest party and increased its tally in the Knesset, though it overcame its rival, the new agglomeration Kahol Lavan, by the skin of its teeth. Similarly, most polling pundits seem convinced that May 23 - the day the results of the Indian elections are announced - will still see Modi in power but the fortunes of his party and coalition are in question.

One advantage Netanyahu had is that Israel's population and politics have shifted to the Right in recent years and are broadly centre-right. In terms of the broader view of peace in the Middle East, left and right are mostly aligned, which is why neither the Palestinian Authority nor Hamas expressed any interest in the democratic ritual. India's population, however, is more mercantile. A weak nation held together by a beleaguered state machinery, the majority of Indians are more concerned with quotidian social and material hurdles in their lives. Hence, Modi's success cannot be as confidently foretold as observers could with Netanyahu.

Pretend as you will, India will vote over the next five weeks on Modi as Israel voted on Netanyahu. Securing his fifth term in office, the Israeli Prime Minister is on track to be not only the country's longest-serving Prime Minister but in all probability the one with one of the strongest legacies. Only time will tell if a similar fate awaits Modi.