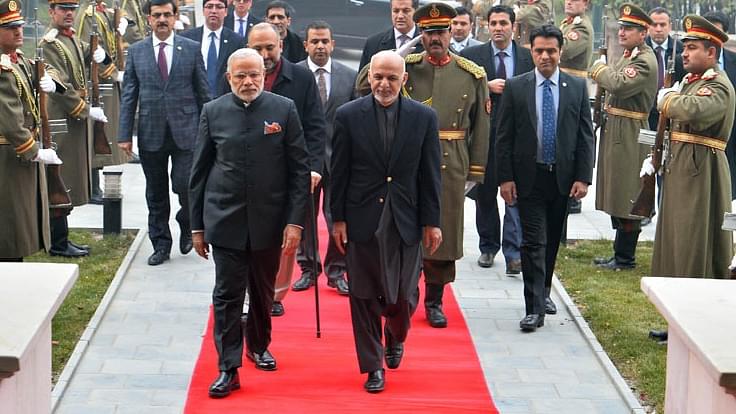 As the sun sets and darkness spreads, it is entertainment time for thousands of Afghan households across the country, rich and poor, educated and uneducated and old and young. They silence their children and sit before the television sets, with their eyes glued to the screens. What is so strange, one may ask.

But they are not watching any local television or local programmes. Instead, they are enjoying Indian television serials, dubbed in local languages.

This is a regular sight across the war-torn country. Millions of Afghans wait for the night to fall to enjoy the Indian soap operas. It is said even the armed militants stopped their fights to watch some of India’s well-known serials.

Also very popular are Indian movies—the Bollywood entertainers. Now, with Afghanistan also developing a cricket team, Indian cricket stars have also become very popular among millions of sport-loving Afghans. The India-Pakistan cricket rivalry and India’s victories over its neighbour are cherished by the Afghans too.

These point to the enormous influence of India’s soft power in Afghanistan and great potential to connect people of both the countries, irrespective of the religious and geographical distance.

It is a fact that Afghanistan shares more shared interests with Pakistan than with India, such as one religion, territorial proximity, ethnic ties (with Pashtuns) and Pakistan sheltering tens of millions of Afghan refugees since 1980s. Despite all these factors, why are the bulk of Afghans pro-India rather than pro-Pakistan? The answer to this question lies in India’s soft power.

India has made massive project-based investments in Afghanistan, becoming one of the leading contributors for the stability and prosperity of Afghanistan. Indian aid now stands over $2 billion, making New Delhi the fifth largest donor to Afghanistan, while Pakistan does not rank in the top ten contributors, according to Afghan officials.

India has disbursed funds and delivered through miscellaneous developmental projects, including three flagship infrastructure undertakings such as the construction of the Salma Dam in Herat province, setting up of the power sub-stations at Doshi- Charikar and the Parliament complex in Kabul. The Afghan Parliament built by India is not merely an edifice but a reflection of India’s democratic credentials. Therefore, for the people of Afghanistan, these are credentials of friendship and the altruistic support, which has won India the hearts of Afghans.

Thanks to the government led by former Afghan president Hamid Karzai, which was completely propped up by the West, the media has also gained remarkable support and appeal. News and political debates are commonly viewed on Afghan television.

However, there are hardly any indigenous television series on Afghan channels. Most of the channels are dependent on external sources for broadcasting. This gap in the programming content is filled by Indian soap operas and Bollywood movies, which are the most popular ones followed by Turkish television series.

Indian soap operas are so favoured that the “very conservative” Afghan people, who at one point had thought of television as satanic, are drawn to its appeal. A religious, 60-year-old woman in Kabul said, “I like it because these are the facts taking place in every home.” She was referring to the popular Hindi serial Kyunki Saas Bhi Kabhi Bahu Thi.

They are of the opinion that the broadcasting of foreign shows poses a threat to Afghans’ religion, cultural values and beliefs, as they consider idol worshiping, a practice in Hinduism, an act of infidelity.

“In Europe, women are not allowed to wear Hijab, and they expect us to remove hijab and be naked,” said the leader of the Hezb-e-Islami and warlord Gulbuddin Hekmatyar, last May. “Removal of Hijab is neither in our society nor in our religion,” he added. In the hidebound Afghan society, for women to work in television is seen to be a disrespectful and an immodest profession, and this is one of the reasons why Afghan television is lagging behind in television dramas and films.

Thanks to Bollywood and impressive Indian advertising, now India has become the best place to get medical treatment for Afghan families. It is also ideal for honeymooners and reasonable for shopping. Even the families of many high-ranking Afghan officials live in India. Such as the family of Dr Abdullah Abdullah, the chief executive of Afghanistan.

Another great initiative of the Indian government is the encouragement it gives to young Afghans to study in India. Every year, 1000 scholarships are given to Afghan students to pursue their higher education in India. This is one of the most effective ways to consolidate relations and in the mutual interest of both the nations. For example, virtually every Afghan student who has studied in India supports India and thinks of it as their second home. For Afghanistan too, educated citizens are its biggest asset. The Afghan elites also send their children to India for education. Indian educated Afghans are most likely to hold good positions in the Afghan government, which will in the long-term strengthen India-Afghanistan ties. One good example is of Karzai, who studied in India and enjoyed a warmer friendship with India’s leaders than leaders of Pakistan.

It is nearly impossible that any Afghan would have ever criticised India for supporting terrorists in the country. On the contrary, the moment any terror activity takes place, even without any investigation, the Afghan people and the government link the terror act to Pakistan. And in most of the cases, not surprisingly, they are not wrong. The bloody blast in Kabul on 31 May this year which killed more than 100 people and left more than 500 injured was planned in Pakistan by the Haqqani Network, according to the National Directorate of Security. In response to this, Sartaj Aziz, the Adviser to the Pakistani Prime Minister on Foreign Affairs, said, “unnecessarily blaming Pakistan will be not in the best interest of Afghanistan.” Unlike Pakistan, that Kabul accuses of supporting terrorists in Afghanistan, India invests in the infrastructure of Afghanistan.

In addition to this, India’s soft power plays a big role in why Afghans admire India and assimilate its culture. Of course, unless it poses a threat to the Afghan national interest.

Interestingly, one of the heroines of the very popular serial Kyunki Saas Bhi Kabhi Bahu Thi is now a Union Minister in the cabinet of Prime Minister Narendra Modi.

This article was published on Observation Research Foundation and has been republished here with permission.

The author is a research intern at Observer Research Foundation, New Delhi.