Israel Shouldn’t Have To Apologise For Its Secularism 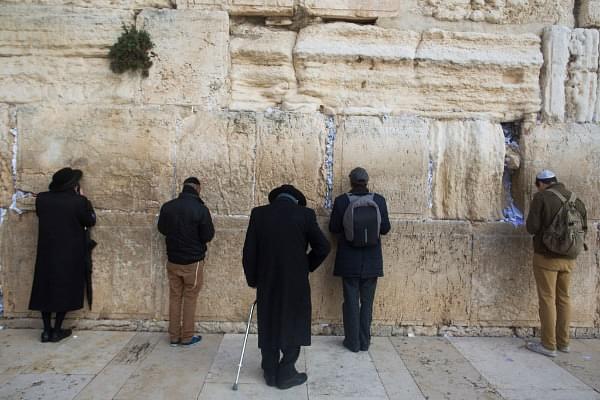 When Winston Churchill described the Soviet Union as “a riddle, wrapped in a mystery, inside an enigma,” in an October 1939 radio broadcast, the British prime minister might as well have been describing the future state of Israel. Outwardly European in many ways, the tiny Jewish state remains far closer socio-culturally to its Middle Eastern neighbours, much like it plays football in Europe while sitting in Asia. Officially, Israel is a secular state, although with interesting caveats that explicitly emphasise its Jewish identity. Similarly, the Jewish state is a democracy, but more so for its Jewish citizens than others.

It is not as if these contradictions of the Middle East's only functional democracy are new or were just noticed. Several factors contribute to the recent focus on the apparent weaknesses of the Israeli polity: the receding of the immediate, existential threats faced by the new state, the removal from power of the founding generation of socialist Zionists, and the growth of a segment of Israeli society that is more traditional and religious. An external source of alarm has been the Jewish diaspora, particularly in America, whose numbers and financial contributions to community causes give them a loud voice, and have felt increasingly alienated from the Jewish homeland as a result of its policies.

There is, however, no need to panic just yet, unless, of course, we are hidebound by doctrinaire definitions of ideas. Israel's intriguing strains of democracy, secularism, and identity are indeed correlative to the country's history and socio-political circumstances, but are not as unique as they are sometimes portrayed to be. In fact, Israeli politics falls well within the normal behavioural parameters of nations and states that are presently unfashionable, thanks only to the vicissitudes of public politics.

Let us take the example of secularism in Israel. Although the state recognises Islam, the Druze, and Bahá'í as well as 10 sects of Christianity apart from Judaism, nonetheless, a menorah has the pride of place on the country's sigil and the weekend falls on the Sabbath; government buildings are decorated for Hanukkah and the national anthem, the Hatikvah, is replete with Jewish motifs; public institutions such as El Al, the national airline, and the Israeli Defence Forces observe kashrut, and Hebrew, the language of Jewish scripture and the bearer of its culture, is the national language.

In essence, Israel is as secular as any liberal democracy. Whether it is France, the United States, or some other example, even liberal democracies cleave fiercely to their heritage, which, for historical reasons, has seen religion in a paramount position. Where Israel goes beyond other secular democracies is in its policing of the boundaries between religions. For example, the state allows Jews from anywhere in the world to return to the Holy Land and obtain citizenship without question. This, however, is not entirely remarkable because dozens of countries offer jus sanguinis citizenship and have leges sanguinis; Israel is not unique in this respect, even though the ethnocentrism may be politically offensive to some.

Israel also officially recognises only Orthodox Judaism, and marriage, divorce, and inheritance are based on halakha. Marriage between the different denominations of Judaism are not recognised, nor are inter-faith marriages with Jews. However, the state accepts any marriage that occurs outside Israel's borders and it is estimated that some 10 per cent of marrying couples travel abroad, usually to Cyprus, for their big day.

These policies have come under fire from secular activists for fostering a strong presence of religion in Israeli public life and for being at odds with democratic principles. The diaspora, a large section of whom are Reform or Conservative, are also incensed with their official status in the eyes of the Chief Rabbinate that considers them as sufficiently Jewish to make aliyah, but not for religious purposes. The Knesset's purpose for having such laws, however, is to maintain the Jewish character of the Israeli state, the value of which is often forgotten in debates over abstract notions.

It is easy to overlook the necessity of a Jewish state, especially as outsiders. The world of academic discourse and international politics, albeit using a vocabulary of liberal pluralism, still bears a strong majoritarian accent of European historical experience. Israel is the only Jewish state in the world and, as such, must bear the responsibility of preserving its ancient culture. Christian and Muslim states have the luxury of flirting with various social movements and ideologies and the sheer number of their sovereignties, not to mention the faithful masses, ensures that there remains a traditional core or anchor. On the other hand, Jews are more susceptible to attenuation through inter-faith marriage, conversion out of the fold, or atheism – a problem compounded by the fact that Judaism has stringent procedures for those who wish to embrace it.

Another necessity for a Jewish state is that there must always be a place that can serve as a safe haven for international Jewry. The fact remains that anti-Semitism still thrives the world over, if with a little more discretion, such as the “Boycott, Divestment and Sanctions” movement. On the brighter end of the spectrum, Emancipation removed any lingering doubts that Europe was first and foremost a Christian realm and Jews would perennially remain die Ewigen. The uglier face of the same phenomenon is the Shoah during the Second World War. It becomes incumbent upon Israel, as the world's lone Jewish state, to defend that identity of its tribes that have made them such targets.

Israeli democracy can serve no role that is different from its secularism – it must be as inclusive and equitable as possible without in any way endangering the core identity upon which the state itself was demanded and built. Israel extends universal adult suffrage to all its citizens and does not bar any profession to certain faiths or ethnicities. There are non-Jewish members in the Knesset, the civil service, and even the military. Activists do, however, point to the discrimination in building permits and resource allocation between Jewish and Arab citizens. From the Israeli perspective, however, this has to do with retaining demographic control over the holy city of Jerusalem (and other religious sites in Judea and Samaria) and falls under the broad rubric of preserving the national heritage. Besides, Arabs had denied Jews access to their religious sites when the area was occupied by Muslims.

As abstractions, democracy and secularism are laudable principles perhaps. Yet the reality of Israeli circumstances demand that they serve only as beacons rather than absolute mandates. Much is made of Israel as an innovative country of startups and the technologically gifted. As true as that may be, the country also serves as an example for innovation in counter-terrorism, legal frameworks, and social policy to countries that do not enjoy the luxury of nearly monolithic cultures and live under constant threat.

By harping about the ostensible failures of Israeli democracy and secularism, critics appear devoted to how we might best serve these ideas rather than the more important question of how these ideas may best serve society. The Western one-size-fits-all model of development, be it material or social, clearly does not hold. Interestingly, the flow of immigrants from cultures that are substantially different from European and American societies has resulted in similar fissures in the West and has led to several leaders (David Cameron, Angela Merkel, and Nicolas Sarkozy) announcing the death of multiculturalism. It is worth bearing in mind that Israel, on the other hand, has lived with these fissiparous tendencies since its inception.

As Israel celebrates its seventieth year of existence, it is time to reflect on the trials and tribulations the tiny state has undergone in that period. Only the local context will inform us whether the Jewish state has succeeded in living up to its promise, not hoary theories of political systems.