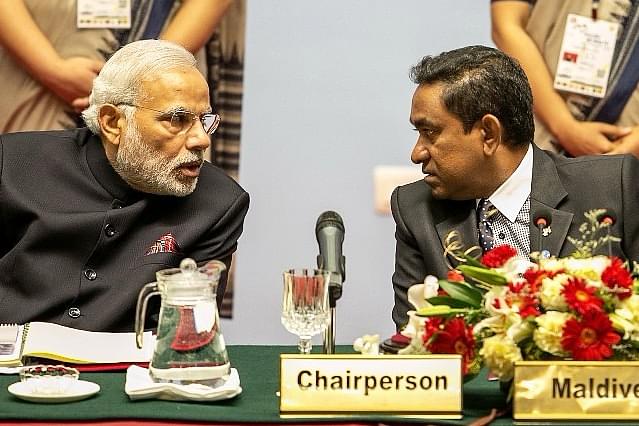 What is the reason India should get involved in Maldives? Or for that matter, in the Indian Ocean region. These need to be sorted out and rather quickly at that. India has not thought about these things for decades. But Maldives poses a challenge that would decide how India would handle its relationship with the eponymous ocean for a long time to come.

Should India try to assume the role of policing the ocean? Because that is what it would entail if it takes on any active role vis-a-vis the island. The size of the Indian gross domestic product (GDP) — a fifth of China and a tenth of the United States of America (USA) with even larger gaps in military strength — makes it important to ask these questions. Essentially, what would New Delhi bring home if it does anything more than what it is currently doing, which is staring down at the antics of President Abdulla Yameen?

Much as there might be a clamour for democracy to prosper in Male, India is not in the vanguard of saving regimes for this reason anywhere in the world. Anti-colonialism is not the same as democracy, as so many of the nations in the South have shown repeatedly. Nitin Pai, writing in Business Standard has argued it is necessary to intervene to meet these threats to ensure those play out far from India’s shores.

One would suggest the most serious of those threats is that of our energy security. The only reason why India should consider getting involved with the island is through the prism of this energy question. Maldives sits on the shipping lines to India from either Mozambique in Africa in the West or from Indonesia and Australia in the East.

If any nation wants to just needle India, nothing more, to make her hassled about the schedule of coal shipments just when there is a urgent demand in the power stations, a station at Maldives would do rather nicely. Incidentally, India has begun to import oil from USA too. That too comes up to our coasts via the same routes. Mauritius, for instance, located deeper down in the Ocean does not have such a strategic location on the shipping lines, though India is negotiating with it to build an offshore oil reserve.

The Indian Ocean accounts for 40 per cent of the total energy shipping trade in the world. The littoral countries are either the world’s largest exporters or importers of energy products. A spanner in the wheel of this trade has its significance. It is not for tourism that China has assiduously begun to build access to the Indian Ocean ranging from Gwadar in Pakistan to ports in Myanmar. These multi-billion dollar enterprises have an economic rationale.

It is for the same reason that India is also trying to repair relations with Seychelles, which too is situated close to the shipping lines. As this Firstpost report noted, India got space on Assumption Island of Seychelles to construct its first naval base in the Indian Ocean region. Though, Seychelles wants to revisit the agreement. Again, it is not just to show off strategic depth that India wants the base.

Seychelles is just off the coast from Somalia, from where pirates have made quite a mess on the waters. Their presence interfered with Indian imports raising the cost of imported coal. A naval operation in 2012 to catch those pirates was India’s first venture in a policing role in the Indian Ocean. That too was sort of forced on India, as the US Fifth Fleet more or less sailed out from the Indian Ocean leaving the question of policing those an open question between India and China, the two nations with the most stake in the seaborne energy trade in the region. But with Seychelles, India has a special relationship. With China having built a naval base in Djibouti, on the horn of Africa just off the oil lanes of Gulf of Aden and Gulf of Oman is Maldives, the next island to secure in the inescapable militarisation of the Indian Ocean. An answer based only on a careful evaluation of our energy security would effectively decide how deep India should venture in the tourist paradise.