Lessons For India From The Dhaka Terror Attack 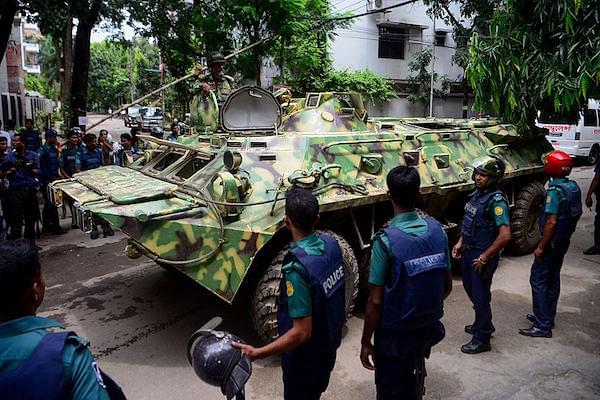 Last Friday’s (1 July 2016) terror strike in Dhaka has thrown up a couple of important lessons not only for Bangladesh but India as well. While it has come as a shock to many that at least four of the terrorists hailed from well-to-do families and studied in elite schools, what cannot be ignored is that their families had reported to the police that they were missing over the last three to six months. But no efforts were made to trace them.

Had the police and intelligence agencies in Bangladesh investigated the sudden disappearances of the four youngsters, the terror plot could perhaps have been uncovered. It would not have been a tough task to monitor the disappearances.

Some of the young men, according to some reports, had travelled abroad in the recent past to get indoctrinated and perhaps even for arms training. They would have used their passports and, had look-out notices been issued against them after they were reported missing by their families, they could have been easily apprehended.

Some of the young terrorists were active till very recently on social media and their posts revealed their fundamentalist leanings. Had the Bangladeshi authorities monitored social media, they would have found out about these young men and their radicalisation. It is unfortunate that this was not done.

The two lessons that the attack throw up are:

(a) Disappearances of men, or women, need to be probed very vigorously; and

(b) Social media has to be monitored very vigorously to detect and trace out radicals who could indulge in terror acts.

It is learnt that Bangladesh has acknowledged this and sought help from India and the US to train its intelligence agencies on monitoring social media and detecting early signs of radicalisation of people.

The monitoring of social media is, however, a contentious issue with many so-called liberals raising questions about the violation of individual privacy. But there can be no doubt that monitoring social media is absolutely essential for the larger good of the people. What the opponents of social media monitoring need to understand is that as long as individuals using the social media are not violating any laws, they have no reason to worry. Intelligence agencies will not bother a married man chatting on a dating site or a married woman sending amorous messages to her secret lover. It is the radicals and would-be terrorists who would have reason to fear, and the so-called liberals and rights advocates have no business springing to the defence of such people.

Bangladesh and India also need to put radical clerics under strict surveillance. Madrasahs and seminaries also have to be brought under strict control, and it has to be ensured that they do not preach Wahhabism, the dangers of which have been written about in this article.

The flow of funds from abroad, especially Saudi Arabia and other Gulf nations, has to be monitored strictly, and the flow of Saudi petrodollars for propagating Wahhabism has to be stopped completely. The Saudis have to be told firmly that they have no business funding mosques and madrasahs with the aim of spreading their puritanical form of Islam. All these suggestions will raise the hackles of so-called secular-liberals, but for the sake of the safety of the nation, these measures have to be done. And they need to be done quietly and efficiently.

The first task before the Indian authorities now is to clamp down on the diabolical, hate-mongering Wahhabi preacher Zakir Naik and throw him behind bars. The Dhaka attackers are reported to have been influenced by this evil man, and it is a shame that Indian authorities have not acted against him despite the huge body of evidence that exists of this man preaching intolerance and hatred that are the essential ingredients of Wahhabism. There are other preachers like Naik in India and Bangladesh, and they have to be silenced immediately so that the poison they administer does not cost any more lives.

India and Bangladesh have to sit up and start monitoring their citizens, stop the flow of funds to spread Wahhabism and extreme ideologies and crack down on clerics and preachers like Zakir Naik.