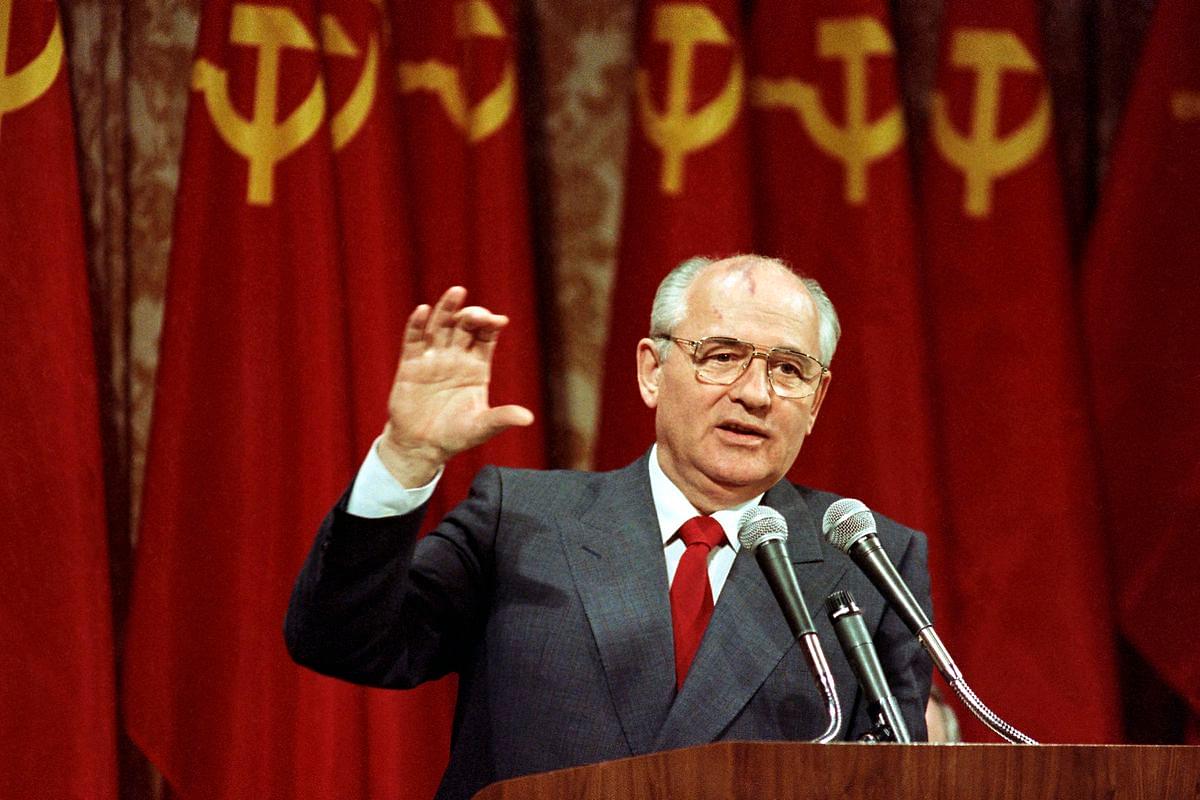 Mikhail S. Gorbachev has passed away. He was 91 years old.

The Independent has reported that there will be no state funeral for Gorbachev.

Perhaps this is no surprise. Gorbachev is celebrated in the west as a 'hero' but in Russia, he was a reminder of chaos Russia and Russians went through as the USSR sleep walked into its own disintegration.

In the west, his policy of glasnost and perestroika are viewed as 'good moves' in essence, in Russia they are viewed as moves which were good for the west.

Celebrated in the west

In the west, he is the man who brought an end to 40 years of east-west confrontation in Europe, led to the withdrawal of Soviet troops from eastern Europe, the reunification of Germany and the break-up of the Soviet Union itself.

Of course, these were not objectives he set himself when he was elected general secretary of the Soviet Communist party in March 1985, nor did he predict or plan the way the cold war would end, with the disintegration of the USSR and the haemorrhaging of the Communist party.

For the west, the disintegration of the USSR was a victory of the 'free world' over the 'evil empire' of totalitarianism.

It isn't surprising that Gorbachev is remembered as a tragic but heroic figure in the west, whose decisions contributed more towards the disintegration of the USSR than any US strategy ever would have.

In Russia, Gorbachev and his rule as the head of the USSR are times that Russians would rather ignore and forget. Unsurprisingly, he got less than 1 per cent of the votes when he contested elections in Russia.

It was a time of extraordinary shame, humiliation and pain for Russians.

If you ask Russian students from Sciences Po on a exchange trip to British universities what they think of Gorbachev, their face quickly changes from one expressing affection to one expressing contempt and derision.

They shake their head with disappointment and point out that a once global power had become a weakened basket case.

Gorbachev, they observe, had set in motion forces that would lead to the dismantling of the centrally planned Soviet economy, without a serious plan for what would replace it, only half-formed ideas that resulted in chaos and threw many millions of people into desperate poverty.

Gorbachev was a man who never quite comprehended what he set in motion.

His fatal flaw was formulating policies to pursue, what he thought were necessary goals for the USSR to remain a global power.

He wanted USSR to reform not because he didn't believe that it was a legitimate polity but because he wanted the USSR to become stronger.

The flaw being, his inability to consider the unintended consequences of his policies.

To understand why he couldn't perceive the unintended consequences and had such a limited grasp of his own society, it is pertinent to consider where he came from.

Gorbachev was born in an era when Stalin ruled the USSR. Never in contemporary history was the concentration of power so high, so firmly in the hands of one man.

His career began during the post-Stalin “thaw.” The "thaw" was a period when it became possible for some people to acknowledge some truths out loud.

His time as a university student and the company he had, shaped him.

He was a student at the Moscow State University.

One of his closest friends was a Czechoslovak student named Zdeněk Mlynář.

Both believed that communism and the pursuit of utopia was in of itself a moral ideology and whatever ails communist societies is not due to the inherent flaw in communism but due to improper implementation, corruption, etc.

Communism could be reformed and lead to societies with vitality, if only the corruption and violence were removed.

Mlynář’s world view led him to become one of the leaders of the Prague Spring.

The Prague Spring was a 1968 movement that started out by calling for “reformed communism” and “socialism with a human face.”

That movement was crushed by Soviet soldiers, proving that the bedrock of communism is totalitarianism, all the talks about compassion for those in the underclass, mere pretensions to justify pursuit of power and control.

Gorbachev however, still continued to believe in the idea of "reformed communism." It was appealing to him.

He promoted this idea when he became leader of the Soviet Communist Party in March 1985.

When he discovered that Soviet workers were unproductive, instead of seeing flaw in the ideology of communism, he blamed the Russian culture of swigging vodka.

The difference between conservatism and communism is quite simple. It isn't about support for the Ricardian principle versus industrial policy, the celebration of capitalism versus criticism of capitalism. Those are surface level differences and these differences are transient.

Gorbachev didn't consider that it might be the lack of incentives that made Soviet workers unproductive. 'You mean to say people will work to their full potential only when they are incentivised enough to do so?' The communist mind couldn't comprehend it.

Instead, he thought 'people don't work to their full potential just because of incentives. That's greedy. These are good people and they are in an unfortunate position. If only they were not harmed by a culture that promotes alcoholism..they must be rescued from themselves.'

What does Gorbachev's anti-alcohol campaign reveal?

Merely 2 months after taking power, he restricted the sale of vodka, raised the drinking age, and started digging up vineyards! That is the communist solution for increasing your nation's productivity. Digging up beautiful vineyards.

By some accounts, the resulting loss of tax income to the Soviet budget was debilitating.

And did the policy even succeed in making people in the USSR less alcoholic? No, people were buying sugar and other products in bulk to make moonshine at home, which was more unhealthy and caused more deaths.

This wrestle with alcohol is a perfect parable that encapsulates much of Gorbachev's later rule. Attempting something with arguably noble intentions and being bewildered when it doesn't turn out the way he expected it to.

Chernobyl nuclear catastrophe occurred at around April 1986. The news was, not unsurprisingly, hushed up. Kyiv went ahead with its May Day parade, even as radioactivity silently caressed the region.

The scale of the disaster impacted Gorbachev. This yearning to stifle bad news is a weakness, openness is necessary, he pondered.

Open criticism of USSR's problems will strengthen communism, he believed.

He imagined that people will talk about what was going wrong in factories and workplaces.

When citizens of the USSR finally got a chance to speak freely and openly, unsurprisingly they chose not to talk about what has gone awry in the Soviet economy but about the past, about the Gulag, the history of mass arrests and mass murders, and Soviet political prisons.

Ukrainians, Balts, Poles, Czechs, East Germans, Georgians, and others then in the Warsaw Pact began talking about going their own way. The Ukrainians for example, remembered the famines. Gorbachev didn't, even though his wife had Ukrainian roots.

Turns out when you are at the top of the Soviet nomenklatura, you are so disconnected from the views of normal people that you are unable to anticipate what will be the consequences of your policy.

In a sentiment that echoes his anti-alcohol campaign, he simply stood bewildered as the polity over which he ruled, gulped the figurative moonshine and he found himself seemingly unable to do anything.

After the disintegration of the USSR, Russia became a country where in most regions, the currency lost all of its value and moonshine became the unofficial currency.

If Mikhail Gorbachev had maintained the Soviet Union (perhaps without the Baltics), and used the force the way that Deng Xiaoping did, his legacy would have been the opposite of what it is today. He would have been a figure who was celebrated in his own country.

He refused to use force to the extent he could, stating that openly was perhaps a mistake. Nobody was any longer taking him seriously, from Baku to Washington.

Despite the fact that he sat atop of the largest nuclear arsenal in the world, the second largest military in the world and as the Secretary General of the monopolistic party.

He removed the old foundation, but didn't build new institutional pillars, and then seemed shocked and surprised when a Mafia state emerged to fill the vacuum.

As a statesmen, he must be judged harshly. His 'statesmanship' was one of the most extraordinary failures in history.

By the standards of humanity, we must judge him much more kindly: he left his office willingly, when he did not need to do, simply because he did not want to fight and risk lives in order to keep it. An admirable human being, not suited to politics.

If he had carefully studied Russian history, he would have known that Russia's centuries of history stands testament to the fact that Russians overthrow gentle leaders, be it his own fate or Tsar Nicholas the second's fate.