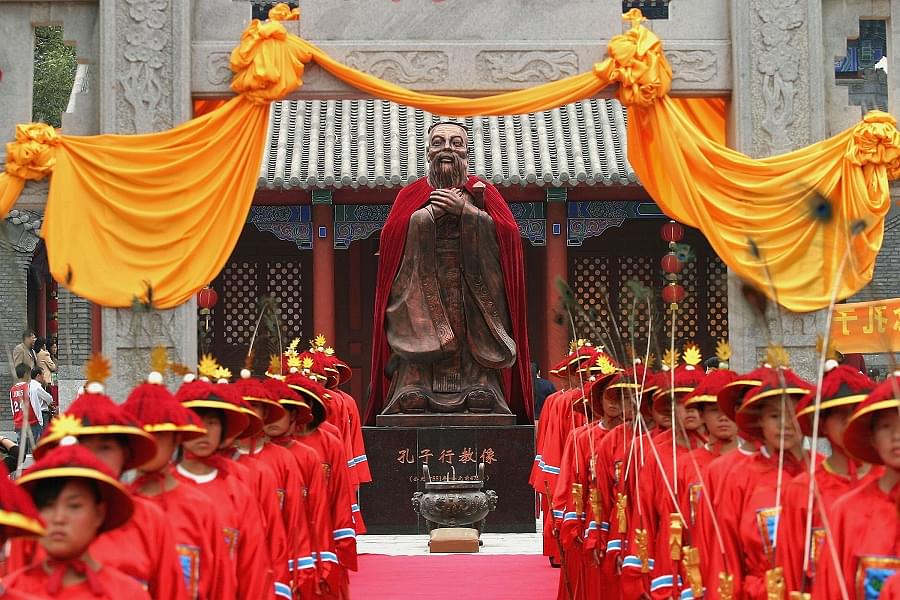 Why is the Communist Party so focussed on reviving Confucianism after relegating Confucius to the corner?

Why is the Communist Party so focussed on reviving Confucianism after relegating Confucius to the corner of China’s past?

Ceremonies were held in some Chinese cities on 28, September, 2015 to celebrate the 2,566th birth anniversary of Confucius. Morethan 2000 participants marched towards the Confucius Temple in Qufu city, the hometown of the wise sage. Among them were UNESCO representatives, Government officials, students who offered their respects to the great Sage.

Furthermore, Confucius was described by Xinhua news as a venerated sage, thinker, and philosopher whose teachings have influenced Chinese politics, values and ethics. This is not an episode in isolation. In 2014, during the birth anniversary of Confucius, President Xi Jinping extolled the virtues of Confucianism as an important part of traditional Chinese culture.

Claiming that the Chinese Communist Party (CCP) is the successor and promoter of traditional Chineseculture, he sought to show the continuity in traditional thought and the CCP’s role as the guardian of all that is “Chinese.”

In the recent past, we have witnessed the grandiose 2008 Olympic games ceremony, with Confucius as the  mascot, a great soft power tactic used by China in addition to Hu Jintao’s “harmonious society” (hexie shehui) slogan made in 2006. Two points are worthy of mention here.

This presents a puzzling as well as a curious phenomenon at the same time. Why is Confucius re-emerging after being relegated to the corner of feudal past and why is the Communist Party increasingly showing interest in this Confucian revival?

The renewed interest in Confucianism must be studied from the lens of history. The history of this philosophy has been punctuated by a recurring pattern of decline and assent at different points in time.

With the fall of Qing empire and the marching tide of May Fourth and New Culture Movements, ‘Science and Democracy’ took precedence, relegating Confucius to the old and traditional, that which did not meet the needs of a new China.

With the KMT rule of Chiang Kai-shek, Confucius was temporarily rehabilitated before again being purged during the Maoist era, the highlight being the “Anti-Lin Biao and Anti-Confucius campaign” branding Confucius a reactionary who should be rejected.

Post-Mao era reforms heralded by Deng Xiaoping again brought about the revival of Confucian thought. The 1990’s saw a “Confucius fever” wherein a lot of research was focused on Confucianism. Added to that was the State sponsoring research and conferences on Confucian themes and mushrooming of Confucius Institutes as cultural exports to the world.

This rise in Confucianism needs to be placed within the broader turn towards nationalism and “Chineseness” in the post-reform era. Having shifted from its traditional Marxist-Maoist ideology towards State Capitalism, the CCP felt compelled  to reinvent itself. In that regard emphasizing old Chinese traditions is an important tool by the Party to shape its new discourse.

To consolidate this position, Elizabeth Perry at Harvard –Yenching Institute argues that the PRC is now coming to heavily rely on cultural governance – “deployment of symbolic resources as an instrument of political authority” thus underscoring the “Chineseness” of the political system.

The trend began with Hu Jintao who presented the “Harmonious society” ideal for China, reiterating that “culture is the life blood of the nation.” He called for promoting “traditional “Chinese culture and made references to the “great revival of the Chinese nation.”

Xi , has also raised concerns over China losing its moral compass and stated that China’s traditional cultures likeConfucianism, Buddhism and Taoism would help fill the void that has allowed corruption to rise. This renewed interest while seeking a space to bring in Confucianism to mainstream however has been given a political turn.

They believe that study of Confucianism can help strengthen Communism. Their initial aim in studying Confucianism is to legitimize the Party authority and thus seek to modify Confucianism “under the stances, principles and methodologies of Marxism, Leninism and Mao Zedong Thought.”

Fang Keli, one of the most prominent socialist Confucian argues that Confucianism is complementary to Marxist ideology and could be useful in preventing “Western liberalization” and promoting “the patriotism of the Chinese people.“

While arguing that Communism has lost its moral capacity in China, scholars like Jiang Qing argue for a new kind of replacement which is not the Western style of Democracy but rather a Humane form of authority rooted in China’s own traditions, thus advocating for Confucianism as the obvious alternative.

Daniel Bell of  Tsingua University believes that the Western style of Democracy has been successfully replaced in China by ‘nondemocratic legitimacy’ with a “meritocracy” wherein through the examination system; public policy can be taken benevolently in hand instead of trusting the unreliable method of elections and choosing leaders through votes.

Arguing against the democratic elections, Bell noted that these elections tend to create instability and are unable to provide effective decision making in the face of complex challenges since voters consider short-term benefits at expense of broader concerns.

A recent Harvard study titled “China’s Ideological Spectrum” highlighted the correlation between Cultural conservatism and a strong leftist identity. The study showed that a Chinese conservative is one who supports traditional Confucian values while also backing a strong state and want the government to have a strong role in running the economy.

They see such discourse as undermining the legitimacy of the Party rather than a convenient marriage between Confucianism and Marxism for strengthening it. Thus the Socialist Confucianists study Confucianism as a political agenda rather than an academic pursuit

By proposing that Marxism should be sinicised by incorporating elements of Confucianism, the Party has been successful in rehabilitating Confucian to legitimize its authoritarian rule and help promote a capitalist economy.