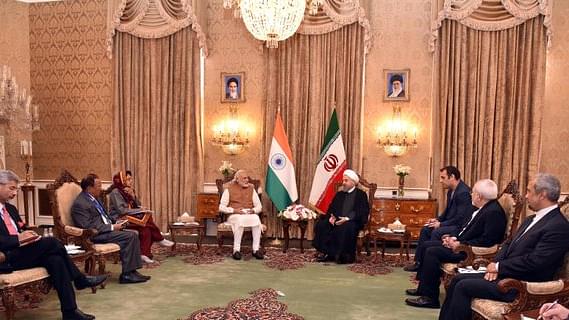 (Once we make up our mind, the distance between Kaashi and Kaashan is only half a step)

But what did Prime Minister achieve in terms of outcomes during his short sojourn? Here is a list of 12 agreements signed between the two countries:

#1 Development Of Chabahar port: India has pledged to invest $500 million for the development of the port. The bilateral contract signed between IPGPL [India Ports Global Private Limited] and Arya Banader of Irant envisages development and operation of two terminals and five berths with cargo handling for both multipurpose and general capacities for the next ten years.

India was competing with China to clinch the deal and this is a big win for India given its strategic value. The port is located in the southern part of Iran, barely 100 Kms away from Pakistan’s Gwadar port, which China is developing as part of its China-Pakistan Economic Corridor (CPEC).

#2 India-Iran-Afghanistan Trilateral Agreement: Indian railways entity IRCON will provide services to Iran’s construction company, CDTIC, for the construction of the Chabahar-Zahedan railway line, which is a part of the transit and transportation corridor to be developed between Iran and Afghanistan.

India will benefit immensely from gaining access to Iranian and Afghan markets bypassing Pakistan. This will also make Central Asia and Europe more accessible to India than it is today.

#3 Credit For Chabahar Port: India’s Export Import Bank (EXIM) has signed an MoU with Iran’s Ports and Maritime Organization (PMO) that will enable it to extend a credit of $150 million for the development of Chabahar port.

#4 Confirmation MoU: Signed between EXIM and Iran Central Bank, this confirms the availability of credit up to Rs 3000 crore for the import of steel rails for Chabahar port.

#5 Manufacturing: India’s National Aluminium Company Limited (NALCO) and the Iranian Mines and Mining Industries Development and Renovation Organization (IMIDRO) will “jointly explore the possibility of manufacturing aluminium metal by setting up of a smelter on joint venture basis in Iran and/or entering into tolling arrangements with smelters in Iran or any other form of business collaboration including sale of alumina etc.”

#7 Cultural Exchange Program (CEP), covering areas such as culture, art, radio, TV, mass media and cinema has been extended till the year 2019.

#8 Indian Council for Cultural Relations (ICCR) and Islamic Culture and Relations Organizations (ICRO) of Iran signed an MoU that aims to develop institutional mechanisms for cooperation between the two institutes and “lays down the modalities for the cooperation.”

#9 Science and Technology department of both countries agreed on an implementation protocol, pursuant of the 2003 MoU, covering areas like “exchange of experiences, seminars, conferences etc.”

#10 Foreign Ministry departments of both countries agreed to enhance cooperation on training of diplomats and exchanging eminent speakers.

#11 Both countries’ external affairs ministries signed an MoU that will encourage the engagement of think tanks on both sides by establishing new institutional mechanisms for cooperation. A conference can be held to discuss the contemporary issues of regional and global significance.

#12 Cooperation on Archival matters: Both countries agreed on the “facilitation of exchange of information and knowledge in the field of archival matters through exchange of manuals, guidelines, rules, publications and other special literature on archival topics.”