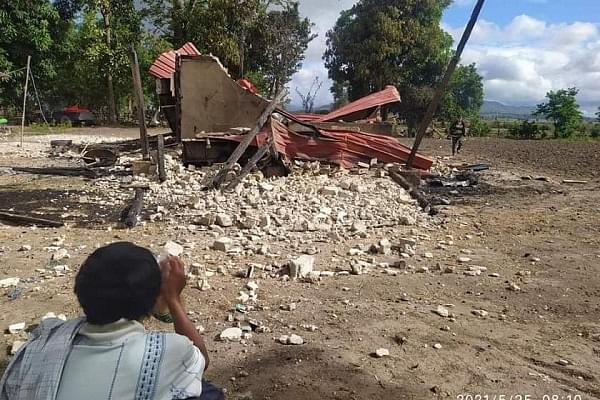 A villager looks on in Myanmar, as the military junta bombs public dwellings and kills thousands, as part of a coup.

Eighteen parliamentarians belonging to Nobel Peace laureate Aung San Suu Kyi's National League For Democracy (NLD) have painted a ghastly picture of the violence unleashed by the country’s military junta that seized power in the country on 1 February this year.

The 18 MPs, along with more than 5,600 fellow-Myanmarese, fled their country and have sought refuge at various places in Mizoram after the brutal and bloody crackdown on NLD leaders and supporters, as well as innocent civilians, unleashed by the Tatmadaw (as the military is called in Myanmar) following the coup.

Speaking to Swarajya from an undisclosed location in Mizoram, one of the lawmakers who hails from the Mandalay region said that while the official death toll (killings by the Tatmadaw) was stated to be 810 (read this), the actual figure could be many times that number.

“Soldiers of the junta are going on a rampage in many provinces where common people are protesting and even putting up an armed resistance. We are getting blood-curdling reports of random shootings, mass killings, arbitrary arrests and even bombings using artillery,” the MP, who cannot be named for obvious reasons, said.

The MP gave chilling accounts of how soldiers have been raiding villages, confiscating properties and killing adult males indiscriminately. In many areas where civilians have organised themselves into resistance groups, the Tatmadaw has unleashed gruesome atrocities in retaliation.

From Saturday, military columns moved into the area and started firing artillery shells on the town. After most of the town was bombarded and reduced to rubble, military attack helicopters moved in and attacked remaining civilian targets, killing countless.

Around 10,000 of the town’s population of roughly 25,000 who survived the bombardment and strafing were rounded up and are staying in a crowded internment camp that lacks basic amenities, the NLD lawmaker said.

The Myanmar MP said that frightful reports of angry civilians and resistance fighters of various ethnic groups in that country attacking junta soldiers and facing brutal retaliation is coming in every day.

“In Kayah state (in eastern Myanmar bordering Thailand), civilian resistance fighters under the umbrella of the newly-formed Karenni People’s Defence Force attacked junta soldiers and killed over 40 of them on Sunday (May 23). In retaliation, the Tatmadaw bombarded the town and deployed helicopter gunships. Scores have been killed over the past two days and thousands detained,” said the MP.

“People, especially young men and women, are angry over the atrocities that have been committed by the junta (Tatmadaw) troops on innocent civilians since early February. Targeted killings, arbitrary arrests and detentions, and atrocities on women have incensed them and driven them over the edge. They are desperate and are thinking that it is better to die fighting the regime than in prisons due to torture. That is why so many are putting up armed resistance now,” the MP explained.

Armed resistance to the junta has broken out in response to atrocities on civilians by troops in various parts of Myanmar since mid-March. Such resistance has been intense in Chin state and Sagaing, and the Magway and Mandalay regions.

Hundreds of civilians have been gunned down by the junta in retaliation since then. This is over and above the targeted killings and detentions of hundreds of political activists and supporters opposed to the military regime.

In many areas that have witnessed violent clashes, Tatmadaw troops are clearing out towns and villages in the surrounding areas and herding civilians into detention centres where floggings and other forms of tortures are routine.

Kani township in Sagaing is one such habitation that has been emptied out after fierce clashes between People’s Defence Force (PDF) fighters and junta troops on Sunday. The troops were attacked by PDF fighters on highways leading out of the township of about 20,000 people.

An unspecified number of army soldiers were killed and some army vehicles destroyed in the fighting. Thousands of residents of Kani and neighbouring townships of Mingin and Yinmabin fled into the jungles after the fighting.

On Monday, army troops moved into these towns as well as 40-odd villages in the surrounding areas, rounded up all civilians who were still there and transported them to temporary internment camps near a military base about 120 kilometres away, said the NLD lawmaker.

Another MP belonging to the NLD who has taken refuge in Mizoram said that PDF fighters and ethnic rebels belonging to various groups have also been attacking business and industrial ventures associated with the military junta.

The Kachin Independence Army (KIA), he said, attacked a jade mine at Hpakant and Hkamti in Sagaing region on Saturday (May 22). These two areas are the major jade mines in Myanmar and are operated by Myanmar Economic Holdings Public Company Limited that is owned by some senior generals.

The KIA overran military and police posts guarding the mines and took some soldiers and policemen hostage.

Fighting between the KIA and the military broke out in the northern Kachin and Shan states in late March after junta troops killed two anti-coup protestors in the Kachin state capital Myitkyina.

The KIA had refused to recognise the February 1 military coup and termed the military junta as ‘illegitimate’, warning the junta against harming any anti-coup protester in Kachin state.

The KIA, and other insurgent groups, have warned the junta of more attacks on military and police if oppression against anti-coup protesters and innocent civilians across the country does not stop.

Early last week, a dozen junta troops were killed by resistance fighters of the Chinland Defence Force at Hakha, the capital of the Chin state.

The Tatmadaw deployed military drones at Hakha to locate resistance fighters but the latter fled before troops reached their hideouts.

The NLD parliamentarians told Swarajya that fighting between anti-regime protesters and the junta is most likely to intensify in the coming weeks and months, leading to more deaths and detentions.

After the brutal crackdown on anti-coup protesters by the junta in February and March, hundreds of young men and women fled to areas controlled by Myanmar’s many ethnic insurgent groups who are opposed to the military regime.

These young men and women, numbering over a couple of thousand and including doctors, engineers, teachers and other professionals, have received armed training from the rebel groups.

The bombing and torching of police stations and government offices across the country in recent weeks, as well as guerilla-style attacks on police stations and junta troops, is being attributed to the resistance fighters trained by ethnic groups like the Karen National Union (KNU) and the Kachin Independence Army (KIA).

Meanwhile, according to the Mizoram Police’s Crime Investigation Department (CID), which keeps track of and deals with political refugees from Myanmar, a total of 5,673 Myanmarese nationals have taken refuge in the state till now. They include eight members of Myanmar’s Parliament belonging to the NLD.

The Myanmarese refugees have been sheltered in nine districts of the state, including state capital Aizawl. Most of them are staying in Champhai district bordering Myanmar.

Local NGOs and villagers are taking care of the refugees, providing them living quarters, food, medicines and other necessities.

Mizoram shares a 510-kilometre long border with Myanmar. The refugees started trickling in from end-February after the military junta intensified its crackdown on anti-coup protesters and politicians.