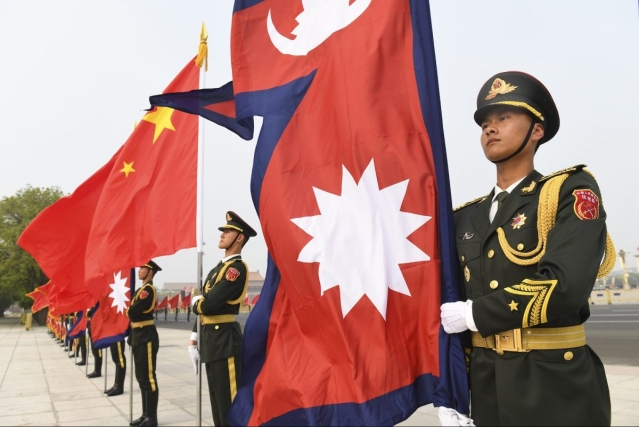 Nepal’s ruling communists are modeling the Himlayan nation’s army on the lines of China’s People's Liberation Army (PLA) which is engaged in running many commercial activities ranging from trading houses to industrial units.

Ever since the communists captured power in Nepal for the first time in August 2008, they have been encouraging the country’s army to foray into commercial ventures. And as of today, Nepal’s army operates fuel pumps, departmental stores, schools and medical colleges, sells bottled water and is awarded contracts for constructing roads, housing colonies and even procuring medical equipment from abroad.

Nepal’s communists’ motive for turning the country’s army into a semi-commercial entity is a sinister one. And they are following the Chinese copybook in this regard, even though the Chinese Communist Party has been trying, unsuccessfully, to divest the PLA of its businesses since 2015 (read this).

The motive: to turn the professional army into a corrupt entity with diverse interests (quite like the PLA) that can easily be controlled by the communists. “The army’s foray into commercial ventures will inevitably breed corruption. Many officers will fall to the lure of money and riches and, through such commercial ventures, develop close ties with businessmen and politicians who own businesses,” said a senior leader of the Rastriya Prajatantra Party (RPP).

“It will be easy to ensnare army officers in corruption or anomalies and by doing that, the ruling communists will be able to control them. With the communists facilitating the entry of the army into business ventures, many army officers will get beholden to them for obvious reasons and the army will get politicised,” said the RPP leader.

Senior Nepali Congress (NC) leader Bishnu Shrestha flagged such grave concerns to his party leadership. “Getting the army to dabble in commercial ventures is a sure shot way of chipping away at its professionalism and turning it into an arm of the Nepal Communist Party (NCP). The army has a clear mandate and should stick to it. Running businesses is not the job of the army,” he added.

Apart from affecting its professionalism, getting the army involved in running commercial ventures and in business deals also affects its prestige and reputation, say Nepal’s opposition NC and RPP leaders. “Getting itself involved in running commercial ventures or businesses that it has no business to be involved in can be dangerous for the Nepal Army’s reputation and prestige,” warned a member of the NC’s central working committee.

An example of the Nepal Army attracting flak for being made to go beyond its mandate came up very recently. The Nepal Army was, in a unilateral decision by Prime Minister K.P.Sharma Oli, asked to procure PCR kits from China in early April. The army did so, and it was revealed last week that the 28,000 kits procured by the army for Covid-19 tests were incompatible with most testing devices in the country.

The army’s bungling of the purchase came in for a lot of criticism. “It was not the army’s job to procure the kits even through a government-to-government (G2G) deal. Why was the army asked to procure them? Is it because the army does not come under the purview of the Commission For The Investigation Of Abuse Of Authority (CIAA)?” asked former Prime Minister and Janata Samajbadi Party leader Baburam Bhattarai.

Many within the NCP are also uncomfortable with Oli pushing the army towards commercial ventures. When the contract for procuring the PCR (polymerase chain reaction) kits was awarded to the army in early April, Rijal had opposed it and suggested that since the army does not fall under the CIAA, the “deal can benefit the army and whoever took the decision, but will weaken the institution (the army)”.

In December 2016, the then ruling communists had cancelled the contract for constructing the Kathmandu-Tarai expressway that had been awarded to an Indian company and got the Nepal army to undertake the project. Soon after, the army revised the original project cost of Nepali Rupee (NR) 112 billion to NR 213 billion.

Last year, Nepal’s federal government awarded a contract for building nine hundred private dwellings for victims of a natural disaster in Bara and Parsa districts. That decision was also criticised by many, including former army chiefs.

The lure of profits and riches has led Nepal’s army to seek an amendment to the Nepal Army Act 2006 which prohibits the army from investing in commercial ventures. The army wants to invest the Nepali Rupee 38.57 billion (INR 2410.8 crore) it has in deposits in various banks in commercial ventures and in purchasing government treasury bonds (read this and this).

The Nepal Army had written to the Department of Electricity Development for permission to build the 25 MW Dudh Khola and 32 MW Bhimdang Khola hydropower projects. The army also wants to invest in a few other commercial ventures.

The Nepal Army’s moves to throw open the Tri-Chandra Military Hospital for business (treat private patients for a premium) attracted a lot of criticism, as did its decision to charge exorbitant fees for a medical college it now runs. The army’s sale of plots in its cantonments to serving and retired officers also drew flak.

Retired Brigadier General Prem Basnyat, who also teaches conflict management at Kathmandu University, says the army’s “pursuit of money” will “hamper its professionalism”. He says the army should shun commercial activities and, instead, the government should foot the army’s welfare bill.

But having tasted blood, Nepal’s serving senior officers want more. Encouraged by the ruling communists, the Nepal army is said to be preparing a blueprint on expanding its commercial activities. The plans include putting parts of the vast tracts of land it owns to commercial use like building and running hotels and resorts.

Military experts and Nepal Army veterans are aghast and warn that modeling the country’s army on the lines of the PLA would be disastrous. One of the biggest weaknesses of the PLA, they point out, is corruption in its senior ranks which is the direct effect of the PLA’s fingers in many commercial pies.

“Do we want the Nepal Army to go the same way? No professional army in the world has commercial interests. Look at the Indian Army or the US Army. It is only the PLA or armies of countries like North Korea and Myanmar which run commercial ventures,” said retired Colonel Suraj Thapa, a decorated para commando.

Ever since the communists first came to power in Nepal in August 2008 (Pushpa Kamal Dahal aka Prachanda became the Prime Minister), they had tried to politicise the army and interfere in its functioning.

Dahal’s move to get the army to induct Maoist combatants in its ranks created a huge controversy and when the then army chief General Rukmangad Katuwal refused, Dahal sacked him. That threw the country into turmoil and Dahal himself had to step down after his allies withdrew support.

Since then, the communists who have held power continuously (save for a brief period from March 2013 to October 2015) have tried their best to model the country’s army on the lines of the PLA. Getting the army involved in business ventures and thus eroding its apolitical nature and professionalism as also making its officers feel beholden to the communists is part of the larger game plan of making the Nepal Army an adjunct of the Nepal Communist Party.