No Serena Williams, Enforcing Rules Is Not Sexism, You Were Rightly Penalised, Like Many Others 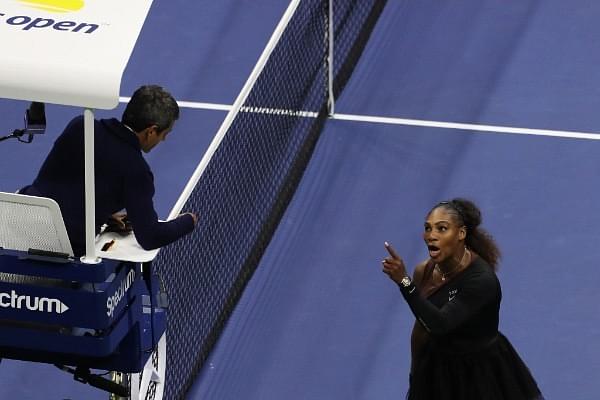 The 2018 US Open Women’s Singles Final played on Saturday (8 September) under the glistening lights in Flushing Meadows, New York, would unfortunately not be remembered for the game of tennis but for the high drama and controversy, it courted.

Williams went into the match a favourite after having cruised through the earlier rounds. Osaka too had a pretty smooth sailing but most expected the superstar to prevail.

Things didn’t go well for Williams in the first set after a barrage of unforced errors meant Osaka broke her serve in the third game. The Japanese subsequently took the set 6-2, but it was the second set which defined the night.

The drama began in the second game when chair umpire Carlos Ramos gave her a warning for a code violation, after judging that she was receiving coaching from her French coach Patrick Mouratoglou.

Now unlike other sports, you are not allowed to receive coaching during a tennis match, the game is pretty clear on that. This rule has in the past seen stars like Rafael Nadal being fined and Novak Djokovic coming under the radar.

Williams took the offence personally and walked over to the umpire to vehemently deny it. She was heard saying, “I don’t cheat to win, I would rather lose”. On that point, her coach Mouratoglou has subsequently admitted that he was indeed giving coaching tips but claimed that Williams never looked at him.

After losing the fifth game to Osaka, Williams in exasperation broke her racket, which is classified as racket abuse and is also banned in tennis. It is not uncommon for rackets being broken on a tennis court and players getting either warned or fined.

Marco Baghdatis received fame and a warning during the 2012 Australian Open when he smashed four rackets during a timeout.

Williams’ situation was tricky. Now she had already been warned for receiving coaching. As per tennis rules, when it comes to code violations, the first infringement receives a warning, after the second offence a point is deducted, the third offence means one whole game is deducted and the fourth offence is “goodbye your game is over”.

During the timeout, the umpire went by the rules and gave Williams a point penalty for racket abuse, meaning she would start the next game down 0-15.

She as a result looked pretty offended and remarked, “every time I play here I have problems.”

Just a small context, during the 2009 US Open semi-final defeat against Kim Clijsters, after being penalised for a foot fault by a lineswoman, Williams had famously remarked, “ I swear to God I'll f****** take the ball and shove it down your f****** throat”.

She was subsequently fined $175,000 with a possibility of reduction and a three-year suspended ban.

Following the point deduction, Williams argued that she should have received a warning and when being reminded of her previous violation, again denied getting coaching. “I don’t cheat, I didn’t get coaching, how can you say that...I have never cheated in my life”, said Williams. She also demanded that the umpire give her an apology.

Things boiled over after Williams went down 4-3. She continued arguing with the umpire and accused him of attacking her character. She then threatened him by saying that he would never officiate any of her games in the future as long as he lived. She also called him a liar and a thief (for deducting the point).

The umpire, as a result, booked her for a third code violation and docked a game which means the score was now 5-3 in Osaka’s favour. The drama continued, and Williams demanded that she get the referee. The tournament director Brian Earley and WTA supervisor Donna Kelso had to enter.

In the following interaction, a visibly emotional Williams remarked that “you know how many other “men” do things that are much worse...because they are “men” it doesn’t happen to them”.

Williams had clearly accused the chair umpire of sexism, while all he did was follow the rules. It would have been understandable had Williams been penalised wrongly, but prima facie she does look pretty guilty.

Coming to Williams’ accusation. If the men are indeed saying worse things on court and are indeed getting away, then they SHOULDN’T. It also doesn’t mean that rules shouldn’t apply to Williams because they are not allegedly being applied to men. Two wrongs don’t make a right.

Just for the record, quite a few “men” haven’t gotten away with such behaviour, most famously being tennis legend John McEnroe who was disqualified from the 1990 Australian Open for misconduct. He was known for having a bit of a temper.

Tennis player Denis Shapovalov was disqualified during a Davis Cup tie after he hit a ball towards a crowd which found the umpire. David Nalbandian kicked a hoarding which injured the line judge, and he got disqualified. Jeff Tarango, who had accused a chair umpire of favouritism during 1995 Wimbledon was fined $43,756 and barred from the event for a year.

Even the talented but brash Nick Kyrgios was suspended for two months for throwing away a game and insulting fans.

I am quite sure there would be more such examples of tennis players both men and women being pulled up for behaviour deemed improper. While there would be arguments that players like Roger Federer got away with small fines for swearing when talking to an umpire, tennis (as seen above), isn’t exactly mute to the misconduct of the men.

Finally, in what should have been a magical night for Osaka would be remembered as a sad chapter in tennis history.

For Williams though it would be a minor moment in a very illustrious career. She is undoubtedly one of the greatest tennis players of all time, nothing would change that.