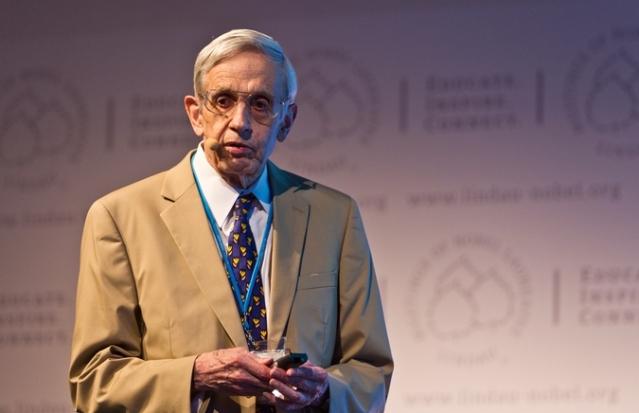 Aditya Kuvalekar pays his tributes to the great economist-mathematician.

John Nash is no more. There is, now, nobody on this planet to have won both the Nobel Prize in Economics for outstanding contribution to Economics, and the Abel Prize in Mathematics for incredible work in mathematics. He was the only one. And almost certainly there won’t be anyone ever again.

To identify Nash, or any other researcher, only by the prizes they win would be unfair. Yet, in case of Nash, the reason why I do it is to impress upon you what he achieved by winning both the Nobel and Abel.

That there was a movie made on him, partly because of his unfortunate illness, made him famous outside the academic fraternity. But his greatness was acknowledged long before the book or the movie came into being. As Ariel Rubinstein wrote after Nash’s Nobel, “Nash is the master of economic modelling”. The fact that that comment came from Rubinstein, a man known in the field for extraordinarily creative economic modeling himself, surely says something about the genius of Nash.

Nash is mostly known for his equilibrium concept called as “Nash Equilibrium”. For many years before his seminal paper, legends like von Neumann were working on the theory of games with a special focus on Zero-sum games. These are basically games where if one player gains $1, the other loses $1. Evidently, common as these situations are, a number of situations in real life do not fall under this category. While von Neumann analyzed these games in-depth, a general theory of games that went beyond his famous Minmax theorem for zero-sum games, was nowhere near. To be fair to von Neumann, he had set the stage. So when Nash arrived, as a graduate student at Princeton, being a genius that he was, the time was ripe for him to deliver. And didn’t he do it wonderfully!

Nash began with an astonishing result regarding a game of two-player bargaining. Here too, he drew from von Neumann and Morgenstern’s derivation of utility given in 1947. Nash modeled the situation where two-players are bargaining over an issue of mutual interest. Nash produced a stunning result here that has become a workhorse model for bargaining in various disciplines of economics. As Rubinstein says in his essay,

“ If I had to select a paper for presentation to a group of intelligent students who wish to know what economic theory is about, I would select Nash’s 1950 Econometrica paper without hesitation. This is my ideal paper in almost all respects, but above all, it is just … beautiful. Every sentence is measured and appropriate. The construction of the model is so logical. The result is surprising. There are plenty of leftover issues. The paper constitutes economic theory in its purest form.”

And then, take a moment to realize that this isn’t the contribution that he won the prize for. Following bargaining, he went on to produce the result that made him famous within and outside academia – The Formulation of Nash Equilibrium along with its existence. His proposed concept of equilibrium gave social sciences a weapon to attack hitherto impossible questions. As Roger Myerson says, “With this step, Nash carried social science into a new world where a unified analytical structure can be found for studying all situations of conflict and co-operation”.

All the revolution of Asymmetric Information much was possible only because Nash gave the framework to think about these issues systematically.

Following these incredible contributions, Nash slipped into an illness from 1960 to 1990. The field of Economics was progressing building on the foundations laid by Nash. Unfortunately, the man himself was aloof from all that was happening due to him. Thankfully he made a comeback and lived long enough to see how high the field had grown on Nash’s shoulders.

My knowledge precludes me from writing anything about his contribution that he, apparently, rates the highest – his work on non-linear partial differential equations. That he won the Abel Prize for that this year suffices to show how fundamental must that have been. Last year, I happened to chat with a great probability theorist Henry McKean for a while. He was telling me about some of the greatest mathematicians according to him. One of them was Ramanujan, another one SRS Varadhan. And in the same league he mentioned John Nash. To think of a man who can do so much in one life after being ill for 30 years, makes one realize what a legend Nash was.

May his soul rest in peace.