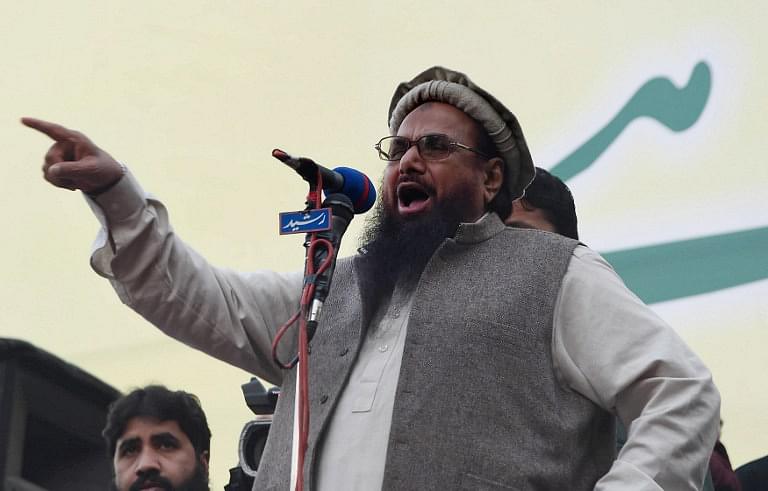 Or else, the terrorists in its fold are getting attracted to the IS and al-Qaida active in the area, threatening the Pakistani state’s investment in terrorism as an instrument of state policy.

There are clear indications that Pakistan is caught in the horns of a rather peculiar dilemma on the Yemen front. Should it send the real army or the proxy army into Yemen? As things stand, a proxy army – namely the Lashkar-e-Taiba (under Jamaat ud Daawa of Hafeez Saeed) – leading the charge to protect the Haramayn Shareefayn in Mecca and Medina and, by extension, the Custodians of the Two Holy Mosques, namely the Saud royal family, looks imminent. This is because the LeT has forever been government-backed, while the Government of Pakistan cannot afford to let this ‘non-state actor’ turn too violent for its own comfort. But if it does not let LeT go berserk, the outfit’s militants get attracted to more radical terror outfits! Read on to know how things came to this pass.

The spate of public support meetings in Pakistan now is being organized by Ahl-e-Sunnat-W’al-Jama’at (ASWJ), the erstwhile Sipah-e-Sahaba Pakistan (SSP), the mother of all Sunni Wahhabi and Deobandi terrorist tanzeems (elements) in Pakistan. Its emir, Maulana Muhammad Ahmed Ludhianvi, is a close friend of the Sharif brothers and the PML(N) has an electoral understanding with him and ASWJ. The Punjab government is very generous with him. He does to the Shias what Muawiyah ibn Abi Sufyan, who had established the Umayyad dynasty, did to the Byzantines of Syria: slaughter them.

On the other hand, LeT follows the Ahl al-Hadith (Ahl-e-Hadith in Urdu — followers of Ahadith, compilation of Mohammed’s life as narrated by the Prophet’s companions) maslak which, though closely resembling Wahhabism, has some differences too.

Wahhabism, named after 18th century preacher Muhammad ibn Abd al-Wahhab, advocates purging of practices such as cult of saints manifest in deification of Sufi preachers (that Barelvis of the Indian subcontinent follow). Wahhabis consider practices like building shrines and visiting tombs (or mausoleums) to pay obeisance to the dead ‘saints’ akin to idolatry. They find it an ‘impurity’ that sneaked into Islam. Wahhabism is centred on the principle of tawhid — uniqueness and unity of God.

While Wahhabis are Sunnis, they are not the majority in the Sunni sect. Spread across Saudi Arabia, Qatar and UAE — in each of which their population is less than 50 per cent of the whole — and in tiny fractions in Kuwait and Bahrain, their influence on other Muslims is compelling nevertheless. This is because the central idea in Islam is that Allah cannot have duplicates, human forms, representatives or even prophets beyond the list ranging from Adam to Mohammed; some believe the list begins with Abraham/Ibrahim. In debates, many non-Wahhabis can be persuaded to believe that celebration of Sufis, which they are prone to, is actually a heretical practice!

Ahl al Hadith, on the other hand, are Sunnis who go by what the Prophet reportedly did in situations which they face in their routine lives. According to R Keven Jaque and Richard C Martin-edited Encyclopedia of Islam and the Muslim World, the sect appears to have “developed out of a pious reaction” to the assassination of Caliph Yazid ibn al-Walid ibn ‘Abd al-Malik (p 27). They are not bound to do taqlid — following mujtahids (Islamic scholars) — but often end up doing precisely that! They have received considerable financial support from Saudi Wahhabis, but they insist they are not Wahhabis themselves. Their similarity lies in purging ‘deviant’ behavior in Muslims and antagonism towards the Shias.

The differences are only of academic interest — they were established by different people, with some of them having been mutually inimical in the past (for example, al-Wahhab was a Hanbali). The Ahl al Hadith constitute about 4 per cent of the Pakistani Muslim population, about 30 million in India (declared as apostates by Kashmiri Muslims who follow the Hanafi School) and 28 million in Bangladesh.

No doubt the Ahl-e-Hadith do consider the Shiah as kafir, but Jamaat ud-Daawah chief Hafeez Saeed did not have such an anti-Shia bias and on many occasions, he has even urged unity between the sects to confront the common enemy the Yahud (Jews), the Hanud (Hindus) and the Nasara (Christians). This is an indicator as to why he is turning to Yemen now, though it may seem contradictory at first glance.

There are clear signs that the LeT learnt a bitter lesson after 9/11 when its hordes of jihadists, whom it had carefully trained over long periods, began deserting it for a more action-packed FATA frontier, initially under various warlords and later under a more unified Punjabi Taliban and the TTP. Stephen Tankel’s National Security Studies Program Policy Paper explains how Pakistan began funding the LeT during the early 1990s. By around 1995, the Pakistan Army and the ISI helped establish the LeT’s military structure with the specific intent to use the militant group against India. The LeT also obtained funds through efforts of the Markaz-ud Daawa al-Irshad’s Department of Finance.

The LeT uses this money to run training camps presently located at a number of locations in Pakistan. These camps, which include its base camp, Markaz-e-Taiba in Muridke near Lahore and the one near Manshera, are used to train militants in a religious course (Daura-e-Sufa), a basic combat course (Daura-e-Aam) and an advanced combat course (Daura-e-Khaas). Such investments that the LeT makes into training its cadres and the attrition described above caused serious problems for the terror outfit. It cannot let go of its trained cadre because it also impacts its popularity and thus the pipeline of foot soldiers. That would impact the revenues too.

The Pakistani Army/ISI also disliked the exodus for the same reasons. Further, such an outflow gave LeT’s enemies much needed manpower which they in turn used to attack the weakening group. Sensing this trend even before 9/11, LeT had already begun to enlarge its scope of activities, with the help of the Pakistani Army, the navy and the ISI and it led to audacious fidayeen attacks on the Red Fort, the J&K Assembly, the Indian Parliament and the 26/11 terror strike. So, LeT has a deep motive and a clear and present need to keep its flock together.

With this at the top of its internal strategic imperatives, it did a couple of things. It sent cadres to FATA to fight shoulder-to-shoulder with the Punjabi Taliban, but against the occupying American and NATO forces. But, the Punjabi Taliban and the Tehreek-e-Taliban Pakistan (TTP) have long had serious misgivings with the LeT because of the latter’s deep nexus with the Pakistani Army, a symbol that the former were relentlessly attacking. Therefore, the LeT offered its services to the Haqqani group which used the LeT to mount attacks on Indian interests in Afghanistan. It helped to some extent and all parties involved — the Haqqanis, Hafeez Saeed and the Army/ISI — were happy for their own reasons.

Then tragedy struck, in the form of the unravelling of the TTP. Whether it was due to the machinations of the ISI or the disaffection caused by the election of Mullah ‘FM Radio’ Fazlullah or the fight among the Mehsud tribes or the general loss of leadership due to drone attacks etc, is immaterial for this analysis. What matters is that there was a four-way split. And here is the key: Except for the pro-government Asmatullah Muawaiya, the rest of the cadre got integrated with the Islamic State (IS) which is attracting jihadists widely in Peshawar and even elsewhere in Pakistan, and of course in many Afghan provinces — more so as the Pakistani government’s 10-month onslaught in an area of the country once overrun by terror groups pushed many fighters towards ISIS.

A series of incidents not favourable to the LeT then happened. Fazlullah, who had succeeded HS Khan of Balochistan as head of the TTP, hit the Army School in Peshawar; Zerb-e-Azb was sharpened; Haqqanis were forced out of FATA (mostly due to US pressure), and LeT had to lie low. A friendlier regime emerged in Kabul and the Army/ISI does not want LeT to participate in actions within Afghanistan. Thus LeT is ironically jobless in a terror-infested as well as terror-influenced country.

The Pakistani Army, for obvious reasons, does not want the IS to gain foothold in Af-Pak lest it should lose its backyard. The LeT fears the same and naturally fears more attrition too. It could even become irrelevant because the jihadists and the Islamists always side with the group that displays more violence and by implication more radicalism. Unfortunately, the Pakistani Army-LeT combine is unable to do much with India because of the very muscular response it received to its probing recently and the credible threats of disproportionate retaliation conveyed through various signals to the Pakistani establishment. The idling LeT cadres have to be gainfully employed. We now know that even the Indian Mujahideen’s top brass left ISI/LeT patronage.

The IS is already ruling over a large swathes of land in Syria and Iraq. It announced its plans for Khorasan (a term used by al Qaida and other terror groups to describe the Afghanistan-Pakistan-Iran region) a few months ago and also appointed an Emir. The Khorasan group has been actively plotting against a US homeland target and Western targets. Thus, the IS and Khorasan are two groups demanding a bite off the same terror apple.

The Islamic State is attracting a lot of manpower not only from the West but also from Pakistan. It could step into Yemen for two reasons: one, to capture more territory in order to expand the Caliphate and, two, to kill Shia Houthis. As the IS juggernaut comes nearer home, the LeT and the Army need to worry. It appears that, for various tactical reasons (fear of internal instability and pressure from China), the Pakistan Army does not want to get involved in Yemen at this stage. This even led to earning severe displeasure from the Gulf Kingdoms and dire warnings too, but this does not bother the Army too much because it is Prime Minister Nawaz Sharif who is more indebted to the Kingdom. At the same time, Pakistan cannot let the IS in to the Yemen vacuum either. So, the best bet for it is to dispatch the trusted (and frustrated) LeT. This might also have the benefit of assuaging the ruffled feelings in the Gulf countries to some extent but their sense that Sharif is someone who could not deliver when needed will remain.

Simultaneously, the Pakistani Army has been trying to appropriate al Qaida in Af-Pak (aka Khorasan) to strengthen its leverage in the post-American scenario and also to ward off the IS incursion. Yemen could be a crucible to test this collaboration too. The LeT is thus metamorphosing into a proxy army not used just in the south Asian context by the Pakistan Army.