Palestinians, Uyghurs, And The ‘Karsevak‘ Principle 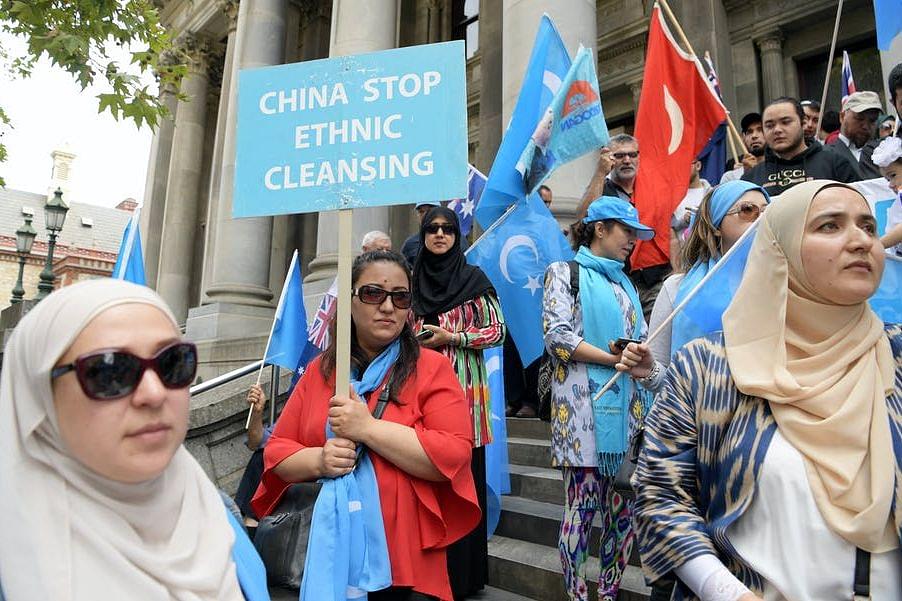 Israel, as usual, is under severe criticism from the usual suspects around the world.

Hamas has been firing rockets into the civilian areas of Israel while Israel's Iron Dome has been able to ward off most, but not all, of these attacks.

Since then, Gaza has been burning. Many buildings suspected of harbouring Islamist terrorists have been destroyed by Israel.

As compared to that, China does not have to face even a quarter of the criticism for the way it has been treating its Uyghur population, almost all of which is Muslim.

Beijing has perpetrated what is alleged to be a genocide of the Uyghur Muslims in its Xinjiang province.

However, Islamist politicians as well as the pro-Palestinian liberal networks show more hatred towards Israel than towards China.

Then there are the Hindutvaites.

For most Hindutvaites, both the Chinese Uyghurs and Hamas are far removed from their world of immediate concern.

While most of them hold a fascination for Israel, they are not much concerned with Chinese actions. Yet, one sees quite a few social media messages which appreciate both the Israeli response to Hamas and the Chinese reprisal against Uyghur Muslims.

Hindutvaites, based on the basic principles of Hindutva, need to differentiate between Israel and China.

Despite having suffered Islamist repression for centuries, Hindus recognise and respect the right of a Muslim to worship in his masjid.

This was in demonstration at Ayodhya on 6 December 1992. Ayodhya contains dozens of mosques. This was the town where karsevaks had been massacred by the Mulayam Singh Yadav administration just two years ago.

There were 15,000 karsevaks on site on the day of the demolition of the dome.

Yet, these very karsevaks who brought down the disputed domes, did not touch even a brick of any of these mosques.

In fact, the custodians of these mosques vouch for the fact that even at the height of the conflict, the mosques of Ayodhya faced no problem.

Today, in this era of social media, we need this wisdom of the karsevaks more than ever.

Israel is a democratic country. What Israel does against Hamas is not an action against all Palestinians.

What China does, is against an entire people.

In Israel there are Bahais, Hindus, Muslims, Christians etc. There are ethnic minorities, linguistic minorities, gender minorities and various religious cults as well.

China on the other hand is an authoritarian state. It destroys minorities. Non-Han societies are marginalised. Their land rights are violated. Their cultural rights are trampled upon.

From organ harvesting to forced sterilisation, China has been waging a war against the Uyghur Muslim community.

It is through this framework that we need to look at both Israel and China.

Hindutva's support for Israel is the support of a vibrant pluralist democracy as well as an ancient civilisation and people who have themselves been persecuted by expansionist theological hatred.

Even so, we do not and cannot overlook the suffering of children and civilians, whether in Gaza or in the rest of Israel. But Israel is acting in self-defence and with an explicitly stated policy to minimise human losses and suffering.

As against this, Hamas is fuelled by hatred for Israel and Jews. At the core of Hamas is anti-Semitism.

Hindutva supports Israel because Israel seeks peaceful coexistence without compromising its self-respect and the right to exist.

On the other hand, the Nehruvian support for Palestinians comes from a strange fascination with Islamism and a deep-rooted anti-Semitism.

While Nehruvians waxed eloquent about Palestinians today, India as a Nehruvian state voted against an early partition of the Palestinian province into separate Jewish and Palestinian states with international monitoring of Jerusalem.

While the Jewish authority accepted this, the Arab nations voted against it. They were confident that they could, in a combined attack, "throw Jews into the sea".

India of Nehru chose to vote against this partition.

One should note the underlying views behind the pro-partition and anti-partition factions.

Jews and the supporters of the Jewish state opted for co-existence. The Arab nations went for confrontation and shamefully, Nehruvian India, despite its high-sounding ideals, stood with them.

The double standards of Nehruvian deception continue to this day. One can see Nehruvians raise high-pitch voices against Israel but when it comes to speaking for the human rights of the Hindus-Buddhists-Sikhs of Pakistan, Bangladesh and Afghanistan, they become muted.

They were equally silent during the Kurdish ethnic cleansing by the Saddam Hussein regime in Iraq.

With respect to one of the cruellest atrocities anywhere in the world against an ethnic-religious minority, the Yazidis, the Nehruvian intellectuals and eminent citizens were conspicuous by their high decibel silence.

One of the worst things a hateful ideology can do is to make its victims unconsciously imitate the ideology itself. When Hindutvaites practise double standards and ignore the repression of Uyghurs in China, they are imitating the inhumanity of Nehruvians.

Hindutvaites should continue to support Israel’s right to existence, even as they ask that human losses and sufferings be minimised to almost none. In equally strong terms, they should condemn China's repression of Uyghur Muslims.