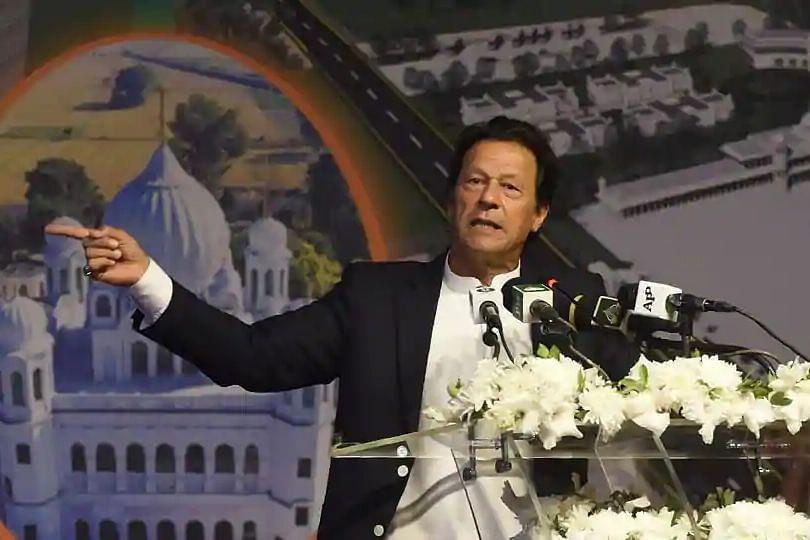 Even as Imran Khan is preaching peace and taking a moral high ground after India’s retaliatory air strikes in Pakistan post Pulwama terror attack, his ministers are giving the game away.

Imran Khan’s own past record of association with Islamic extremists, that earned him the moniker ‘Taliban Khan’, is enough to cast aspersions on his peace-speak now. However, his ministers are openly indulging in rabid anti-India and anti-Hindu rhetoric on television debates and in speeches, and there have evidently been no efforts to rein them in.

Swarajya recently reported how Pakistan’s minister Ali Muhammad Khan has gone on record to invoke Muhammad bin Qasim and Mahmood of Ghazni on India and has been openly calling for ‘Ghazwa-e-Hind’ (holy war against India).

At a show aired on Pakistan’s Geo News channel won 28 February (two weeks after Pulwama attack), Pakistan’s Minister of State for Parliamentary Affairs Ali Muhammad Khan called Pakistanis descendants of Islamic invaders in India. “Ghazwa-e-Hind is bound to happen. Are you too eager for it?” he said.

You can watch the video here and the full show here.

But if you thought Ali Muhammad Khan’s is a lone voice peddling anti-Hindu rhetoric, you are highly mistaken.

Another of Imran Khan’s minister, Fayaz-ul-Hasan Chohan, even called Hindus “cow urine drinkers” in a recent speech. The derogatory phrase – cow urine drinkers – is commonly used for Hindus in Islamist parlance and was used by terrorist Adil Ahmad Dar before he rammed a vehicle laden with explosives into a Central Reserve Police Force (CRPF) convoy in Jammu and Kashmir’s Pulwama in the name of Islam.

In a speech on 24 February, Chohan, who is currently provincial minister of Punjab for information and culture, said, “O cow urine drinkers, we are Muslims. We are under the banner of valour of the likes of Maula Ali's and Shaheed-e-Karbala Hussein Ibn-e-Sali, you are not. Don't live in the belief that you are seven times our size as you don't have what we do. O idol worshippers, you cannot have the valour we do.”

You can watch the video here (the said statement starts at 2.00 minutes).

On 19 February, barely an hour after Imran Khan went on record to absolve his country of any involvement in the deadly Pulwama terror attack, Pakistani railways minister Sheikh Rasheed went on a communal rant against India and Hindus, threatening a nuclear war and declaring that no bells would sound in Indian temples.

“If anyone will stare at Pakistan with an evil eye, his eye will be gouged out, and then no grass will grow, no birds will chirp, and no bells will sound in temples, as Pakistan is that bastion of Muslims that Muslims from the world over look up to,” said the senior minister in a video uploaded by him.

Far from being reined in, Rasheed continued in the same vein on 28 February in his speech in Pakistan parliament where he opposed the release of Indian pilot Abhinandan Varthaman. Rasheed appealed to every Muslim to join “Jihad”. “Doing Jihad is mandatory in Islam. If a Muslim does not do Jihad, he is no longer a Muslim,” he said.

In the earlier video, Rasheed had said that “not only our 22 crore Muslims but 30 crore Muslims on your [Indian] side too would rise against you [Modi] in the name of Islam”.

In the same parliament session on the tension between India and Pakistan, leader of opposition Shahbaz Sharif called Indian prime minister Narendra Modi a “terrorist” who “martyred thousands of Muslims in Gujarat”. Shahbaz Sharif is younger brother of Nawaz Sharif.

Such xenophobic rhetoric that Pakistani politicians are relentlessly peddling may come off as a surprise considering the ‘peaceful approach’ Imran Khan has taken lately - which has compelled his country’s lawmakers to (ridiculously) ask for a Nobel peace prize for him - but should it really come as a surprise?

To anyone who has been following the political discourse in Pakistan’s parliament or prime time television, it shouldn’t. Not only politicians, but Pakistan’s most-respected intellectuals and commentators also openly express their hate for ‘idol-worshippers’ and their belief in the superiority of Islam over other religions.

The idea of Jihad against India, and the jihadi goal of liberating Kashmir and eventually the entire India from Hindus and other non-Muslims, is seared into the Pakistan psyche and it shows.

Orya Maqbool Jan is a renowned intellectual in Pakistan and has received numerous national awards, including the best Urdu columnist in 2004. He regularly appears as analyst and commentator on Pakistani television news channels.

In a discussion on Pulwama last week (28 February) on Neo TV Network, Jan called Hindus as enemy of Muslims, saying it's described as such in the Islamic holy book of Quran and Hadith.

"Muhammad has said in Quran and Hadith to Muslims that you will have two enemies - those who do Shirk openly and the Jews. We already know that Jews are our enemies. And which community does Shirk openly? It is the Hindus. Even Buddhists don't do Shirk this openly. Today, Hindu is the only one who does Shirk openly," Jan said.

Shirk in Islam is the sin of practicing idolatry, polytheism and the association of God with other deities.

Hinting at a confrontation with a Hindu India, Maqbool further said, ‘...The main issue is that it is bound to happen. It hasn't happened until now, but when it shall happen, twenty-three crore Muslims will cease to be Indian nationals.” When asked about the option, he said, “There is no option but war.”

You can watch the video here (his statement is at 17.30 minutes onwards).

Hassan Nisar is another "veteran" news analyst, columnist and journalist in Pakistan. He is, in fact, one of the most prominent and respected in the field.

In a show on 17 February, when the host asked him about India threatening to withdraw most favoured nation status to Pakistan in the wake of Pulwama terror attack, Nisar talked about the possibility of nuclear attacks. He saw it as purely a battle between Islam and Hinduism, arguing that even if Pakistan goes up in flames, Muslims elsewhere in the world will survive but if India is attacked, Hindus will cease to exist.

“It's okay if you want to attack us. If you dream to turn the entire region into ash, then it's fine. We have 50 [Islamic] countries in the name of God, but you don't have an existence beyond yours,” he said.

You can watch the video here (his statement is at 5.21 minutes onwards).

Imran Khan himself is no different. Readers may be reminded of what Gopalaswami Parthasarathy, former Indian high commissioner to Pakistan, said about Imran Khan and his “Jihad” against India shortly before he officially took over as prime minister of Pakistan in July. Parthasarathy - who is not known for mincing his words - shared an anecdote with a journalist.

"...This was in 1982...A friend of mine, a Pakistani cricket commentator called Chisti Mujahid, who is no longer alive, asked him..`Imran, why is it when I saw you were bowling against England, it was okay, you were bowling well, but when it is against India it is fire and brimstone?' Imran's reply? ‘Well, when we play against India, I don't see this game as cricket. I think of Kashmir, and regard it as a jihad’,” Parthasarathy recalled.

As is evident from these statements, post-Pulwama discourse in Pakistan is heavily laced with hate against India and its majority Hindu inhabitants and most of it is peddled by Imran Khan’s ministers themselves.

It’s tragic that Khan’s ‘peace gesture’ has found takers in India. The question now is, will the same bunch dare to take him on for allowing this hate rhetoric?

Madhur Sharma is an undergraduate student of history at the University of Delhi. He tweets at @madhur_mrt.