Seventy-three Years Since Hiroshima And Nagasaki, The World Has Not Learned Its Lessons 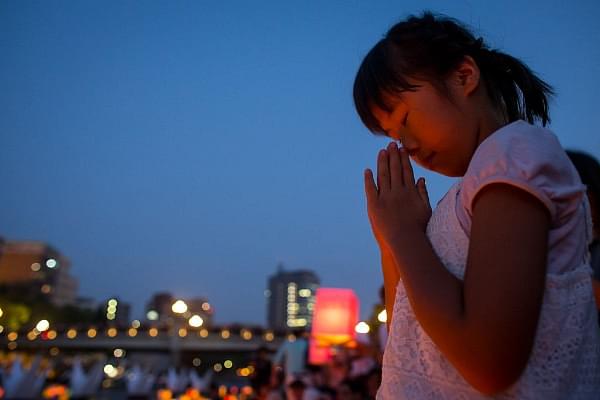 What the world needs today, more than ever, is peace. (Chris McGrath/Getty Images)

The world has moved on from the days of ‘Little Boy’ and ‘Fat Man’, the two bombs dropped on the Japanese cities of Hiroshima and Nagasaki, in 1945. Instead of the 15 kiloton bombs used on these two cities, Hydrogen bombs with a blast yield of 50,000 kilotons would be employed, killing ten times the number of people.

Contrary to popular belief, the decision to use the atomic bomb was a political one. Japan, though already defeated in the Pacific by the United States (US) Navy, still posed a challenge, for it was against an unconditional surrender. Also, the prospect of Russia joining the US in their assault on Japan negated the use of an atomic bomb.

The scientists who were part of the Manhattan Project wanted a demonstration of the bomb for it to be used as a warning against other states, notably Japan. The White House, however, had other plans. On 6 and 9 August, the cities of Hiroshima and Nagasaki were decimated. The age of atomic warfare had begun.

While the Second World War ceased the era of conflict in Europe, it led to a more significant battle across the Pacific. For five decades, the world held its breath, as the US and the Union of Soviet Socialist Republics (USSR) engaged in the Cold War.

Following the US, which conducted its first nuclear test in 1945, USSR tested its primary nuclear weapon in 1949. While the United Kingdom (UK) had its first nuclear test in 1952, the US accelerated the arms race by testing their first Hydrogen bomb the same year. The French attained nuclear capability in 1960 while the Russians detonated the Tsar Bomba for the first time in 1961.

From 1945 to the collapse of the Berlin wall, the US and USSR found themselves on the brink of a nuclear war on many occasions. In 1983, after US President Ronald Reagan termed the USSR an ‘evil empire’, the Soviets busied themselves preparing for a nuclear war. Mistaking a Korean Airlines flight for a US spy plane, the Soviets shot it down. Two hundred sixty nine civilians perished. In 1945, there were only 13 nuclear bombs in the world. By 1991, the number was 57,986, with more than 50,000 of them with the US and USSR alone.

The US-headed global order after 1945 was founded on alliances, with the North Atlantic Treaty Organization (NATO) being the most prominent one. Nazi Germany had invaded over 15 countries across the 1930s before attacking Poland in 1939. The absence of any alliance in Europe resulted in Germany being able to usher in the Second World War. With NATO, each member was united within a union. For instance, after the 9/11 attacks on the US, Europe and the UK came to US’s aid in their war on Iraq.

Seventy three years after Hiroshima and Nagasaki, 29 years after the fall of the Berlin Wall, and 17 years after the attacks on the World Trade Center towers, the world order is undergoing a critical transition.

The fragility of NATO is out in the open. In the recently concluded NATO summit in Brussels, US President Donald Trump spoke openly against his European counterparts. Asking them to increase their defence expenditure, Trump talked about how the US was paying for Europe’s defence while its members carried out business with the Russians. Stating that Russia was controlling Germany, Trump’s angry rhetoric created a dent in the unity of NATO.

The rift between the US and its three NATO allies, France, Germany, and the UK, has also been witnessed in their handling of the Iran nuclear deal. With Trump walking out of the deal earlier this year, the US found itself alienated as other members including China and Russia reaffirmed their support for the deal. Backing Saudi Arabia and Israel in the Middle East, Trump’s decision to exit the Iran nuclear deal makes for a dangerous prospect, for it erodes US’s credibility in the very order they created.

While some progress has been made on the North Korean front, things look far from settled. Earlier this week, speaking to North Korea’s foreign minister, Ri Yong Ho, in Tehran, Iran’s president, Hassan Rouhani, criticised the US for not fulfilling its commitments. Given that the US is trying to walk the path of peace with North Korea, the closeness of Iran and North Korea does pose a threat to the global order. The ongoing Syrian crisis further adds to the volatility of the Middle East and, thus, the entire world.

Quite like 1945, even in 2018, the problem is not technology but the politics around it. Japan was willing to surrender even before the first atomic bomb was tested. However, it was the fear of Russian involvement in the war that led to the use of the bomb not once, but twice. While the US and USSR came close to a nuclear war during the Cuban Missile Crisis in 1962, the idea of MAD, or mutually assured destruction, has kept the adversaries at bay.

Nuclear energy has been put to intelligent use in various other industries and is maybe our key to fighting climate change along with renewables. Turns out, a regulated nuclear trigger is not the worst idea. The US’s arsenal gives Trump the strength to vent out against rogue states on Twitter and, thus, get them to the negotiating table by either threatening their existence, as in the case of North Korea, or their economy, as being witnessed in Iran.

What threatens the world is another arms race, this time in space. Trump’s idea of a ‘Space Force’ is similar to Reagan’s “Space Defense Initiative”. While the Space Defense Initiative was abandoned after the collapse of the USSR, the idea of a Space Force will find no takers in the Congress or Pentagon. However, even in jingoistic rhetoric, the plan could trigger an arms race previously unheard of. Involving China, US, Europe, and possibly Russia, it would only add to the volatility of the global order.

As a result of the many treaties among nuclear powers, the arsenal has been reduced by 80 per cent. Nuclear weapons have prevented a third world war, but they cannot prevent leaders of the free world from using politics as an excuse to build more advanced weapons on earth or in space. In 1945, the US was convinced that the use of atomic bombs would end the Second World War and save millions of lives. What if, sometime in the future, a leader warrants the use of the same trigger as an excuse to ensure the survival of their country or allies?

It’s been 73 years, but the world hasn’t learned its lessons. In 1945, there were enough military and diplomatic options available for everyone to avoid the use of atomic bombs. Today, after seven decades of world peace, nuclear weapons offer a complex yet workable prospect for global peace. The arms race must stop here.

Too many triggers on earth and in space and somewhere, someone shall find an excuse to press one, resulting in another instance of politically motivated nuclear attack, like the one witnessed in Hiroshima and Nagasaki, this time in Iran or North Korea.

The world is not ready for that.