Sino-India Rivalry In The Indian Ocean 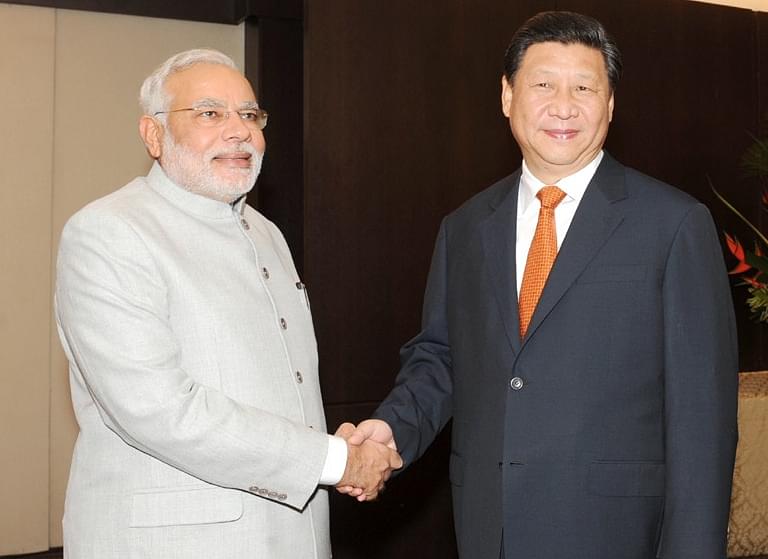 Indian Prime Minister Narendra Modi visited China from May 14 to 16. Mr Modi’s welcome at Xian, the hometown of President Xi Jinping, reciprocated the Chinese President’s reception at Ahmedabad in September 2014. Amid the pleasantries between the leaders, the vexing border issue stood out with no sign of resolution.

The joint statement issued read, “The two sides affirm that an early settlement on the boundary dispute serves the basic interests of the two countries”.

PM Modi in his statement to the press said “we agreed that we will continue to explore a fair, reasonable and mutually acceptable resolution”. He also reiterated the importance of clarification of Line of Actual Control (LAC) in this regard. The Chinese have for long side-stepped India’s demand to verify LAC on the maps with the motive to allow it to claim new grounds. Chinese state media showing the map of India without Jammu & Kashmir and Arunachal Pradesh during Mr Modi’s vist was a provocative reminder of China’s revisionist agenda.

The unresolved boundary issue, frequent incursions into India by Chinese troops and China’s claim over the Indian state of Arunachal Pradesh and the growing economic and military power of both countries will keep them locked in a security competition in the region.

China, a lion that has awakened

Under the cloak of ‘peaceful rise’, China started flexing its muscles around the year 2005. It started raking up territorial issues with all its neighbours. Within a year of taking over China’s Presidency in 2013, Xi Jinping announced “a lion that has awakened” marking and end to Deng Xiaoping’s policy of “Tao guang yang hui” or “hiding one’s capabilities and biding one’s time”. It is in confrontation from East China Sea where it has a conflict with Japan over Senkaku Islands, to South China Sea which it claims almost in entirety. It is building an artificial island off Spratly Islands and calls it sovereign territory.

Chinese military leader Zhao Nanqi said in the 1990s: “We can no longer accept the Indian Ocean as an ocean only of the Indians”.

Booming Chinese economy aided by its massive export driven manufacturing industry, dramatically increased its appetite for energy and raw materials. China has surpassed US as the largest importer of oil in the world. Three fourths of its energy shipments and a large proportion of its containers carrying manufactured goods destined to Asia, Europe, Africa and Americas pass through the narrow straits of Malacca.

A Chinese daily on July 15, 2004 opined that “It is no exaggeration to say that whoever controls the Strait of Malacca will also have a stranglehold on the energy route of China”. China fears India or the US can choke its energy supplies.

To protect its energy and trade routes, China embarked on rapidly building and modernizing its navy which now boasts of the second largest submarine fleet in the world including new generation nuclear and diesel-electric submarines with air independent propulsion (AIP) system. It has commissioned its first aircraft carrier which it bought from Ukraine and is training its pilots in carrier operations using its home built J-15 fighters. China plans to build at least three more carriers. Chinese navy is poised to overtake the US Navy in terms of number of warships in the future.

China has used the anti piracy operations off Somalia to test and train its ability to deploy its navy in distant waters sending even nuclear submarines into Indian Ocean.

China has attempted to secure military bases in the Indian Ocean. Chinese policy, it appears, is to use the cloak of commercial ventures to hide military use. China has for long operated a listening post on the Coco Islands off Myanmar though there has been denial from both countries. The island now has a runway built by the Chinese.

China is also negotiating a military base in the strategic port of Djibouti that will see both the US and China each having bases in the small nation that guards the entrance to the Red Sea and the Suez Canal.

In 2005, the U.S. consulting firm Booz Allen Hamilton came up with the “string of pearls” theory, which posits that China will try to expand its naval presence by building civilian maritime infrastructure along the Indian Ocean periphery. As part of its push into the Indian Ocean, China has made ports in Hambantota in Southern Sri Lanka and Gwadar in Balochistan province in Pakistan. Gwadar is significant as it’s located close to the choke point of Strait of Hormuz and can monitor all shipping that goes through the region including India’s oil shipments. Its military use cannot be ruled out.

Chinese President Xi during his visit to Pakistan in April this year committed to invest $46 billion in energy and road project that will connect Gwadar Port in Balochistan to Chinese city of Kashghar in its restive Xinjiang province. China is also making ports in Bangladesh and Burma. This is leading to the encirclement of India. India is not convinced with Chinese denial of using these ports for its military. China’s Maritime Silk Route is nothing but rehashed String of Pearls which will help it exercise influence in the Indian Ocean, an example being Maldives, a country China is courting and receiving enthusiastic support from its president, Abdullah Yameen.

India’s Sphere of Influence and Interventions

India considers its sphere of influence to extend from the Red Sea in the west to the Strait of Malacca in the east which links the Indian Ocean with the Pacific Ocean. India has a defence agreement with Oman which includes berthing right for its navy. In 2008 India signed a defence agreement with Qatar which virtually makes India the security guarantor of Qatar. India also has extensive defence ties with Singapore.

India’s Andaman and Nicobar Islands at the mouth of the Malacca strait hosts India’s only tri services command and India is looking to enlarge this by stationing a division size force, more naval and air assets.

India has a monitoring station in Madagascar, complete with radars and surveillance gear to intercept maritime communication and plans to have 32 radar stations installed in Seychelles, Mauritius, Maldives and Sri Lanka.

PM Modi during his three nation tour of the Indian Ocean Islands in March earlier this year handed over one such station to Seychelles. India has also provided surveillance aircraft to Seychelles and Mauritius. PM Modi, commissioned the Barracuda, a Naval Patrol Vessel which is the first warship to be exported by India. During this visit, India secured the ‘development’ rights for two islands, Agalega in Mauritius and Assomption in Seychelles.

India, having close and historic ties with countries in the region, has a history of interventions to safeguard its interests. An unwritten ‘Monroe Doctrine’ whereby India will not entertain any government that is not pro-India or allow any “external forces” take away its influence in the region.

In June 1986, India under “Operation Flowers are Blooming” deployed INS Vindhyagiri at the Seychelles Port of Victoria to abort a coup attempt against the then President Rene.

In 1988, under “Operation Cactus”, India swiftly put down a coup attempt by Tamil mercenaries against President Maamoon Abdul Gayoom in the Maldives by landing troops within hours.

India-China rivalry in the Indian Ocean

While China has legitimate interests in the Indian Ocean owing to its energy and trade flow, India will oppose China’s growing presence in the region. China sees India as an impediment to its domination of the region. Chinese government mouthpieces show utter contempt for India using terms like “inferior Indians”. China views India’s growing relations with the US with suspicion.

While countries littoral to the Malacca view the Indian Navy as a reliable and non-controversial ally and convinced of the Indian Navy’s ability to play a non-threatening, security enhancing role and look towards India to be a security provider in the face of increasing Chinese aggression, China will not accept India as a guarantor of security in the region. India will have to make sure it leaves no gaps in the security of the Andaman and Nicobar Islands which in essence is a large unsinkable aircraft carrier for India and a major worry for China as it gives India a strategic advantage.

Intensifying Sino-Indian rivalry in the next decade

Recent Pentagon report said China wants to expand its military access to the Indian Ocean region and may set up access points or replenishment bases in India’s vicinity within the next ten years. This will only intensify Sino-Indian rivalry for domination of the Indian Ocean.

To counter Beijing’s MSR, India is working on ‘Mausam’, the old spice route project with the countries of the region. India will need to spend more infrastructure projects in these countries to counter the influence of China.

Chinese investments in the region are largely on its terms and to the detriment of the host country. It does projects at inflated prices using its own workforce and equipment at money provided at high interest rates. India has a window of opportunity to strengthen its position and foster more goodwill by offering honest and favourable terms along with development projects in the region. India will have to improve its shoddy project execution record.

India should look to convert the islands whose development rights they have secured form Seychelles and Mauritius into military bases. India should negotiate treaties with these countries to handle their defence just like India does for Bhutan. India has been shy of making military bases overseas. Indira Gandhi in 1965 declined to station naval assets in Singapore and get involved in any security role. The US strategy has shown that strong friends, alliances and bases all over the world is what helps them project power.

A combination of diplomacy, strategic investments and increasing military strength in the Indian Ocean Region is the only way India can counter China. While India develops its naval assets like aircraft carriers, submarines and other warships to project power across the region, it will have to develop a strategic doctrine for the Indian Ocean Region all the way to East China Sea. Having a strong navy is only the means to achieve the strategic objectives.