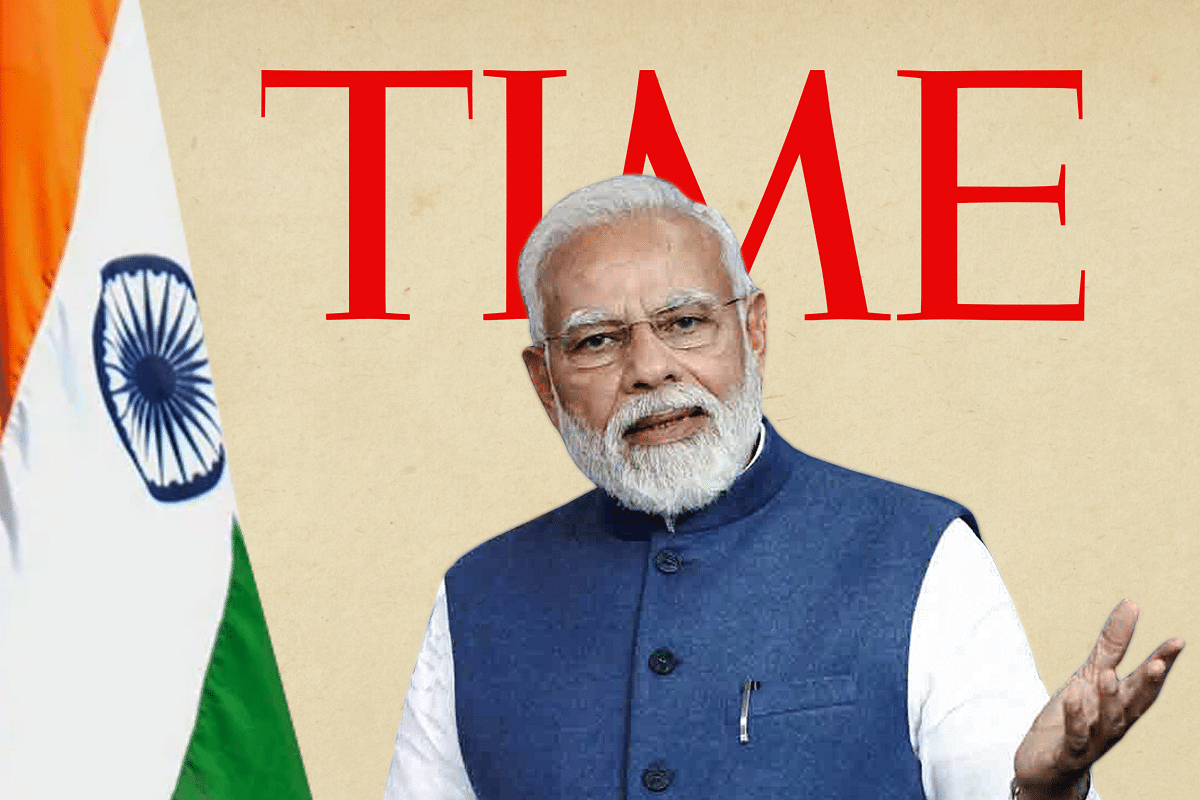 The emergence of a multi-polar world in the twenty-first century has prompted a more equitable distribution of power; often with respect to issues that concern the whole world and not just a part of it.

This means that Western-media, used to being placed on a high pedestal of influence simply because it belonged to an influential part of the world, now finds itself frantically in search of relevance and consideration.

Naturally, their response to this shift towards a more merit-based idea of global reportage has been unkind; and at the forefront is TIME magazine.

TIME, considered to be a cornerstone of journalism and global reporting, is dwindling fast - in terms of both circulation as well as quality.

A reason may be that even when it was a common practice for magazines to have an opinion of their own, a distance between facts and opinions was always apparent when it came to India.

In the case of TIME, however, the gap became wider with every passing year.

Moreover, once PM Modi’s government took over, opinions in the magazine started turning towards an all-out campaign that is not too far away from malice.

A perusal of the magazine’s recent issues removes all doubt regarding its intentions. Every possible angle has been covered in the publication’s attempt to paint a picture of India that is grim, chaotic and frightening.

Another common thread that emerges from this analysis is that of expertly camouflaging facts from the ground.

Here are some examples of how TIME magazine is attempting to pass off what can only be called fear-mongering, as journalism:

COVID-19 in India – With a Generous Helping of Malevolence

Not only did the magazine take up the issue of a once-in-a-century pandemic with absolutely no sensitivity towards the victims, it did so simply to showcase the efforts of the Indian government in an unfavourable light.

A headline from an article in March 2020 all but screams a hatred of one of the world’s most popular leaders, it says “Modi's Hasty Coronavirus Lockdown of India Leaves Many Fearful for What Comes Next”.

Considering that by this time nations like Italy, France, Singapore, the United Kingdom etc. had already announced lockdowns, PM Modi’s announcement – which after a day of a voluntary Janata Curfew (People’s curfew) – was neither hasty nor unplanned.

Moreover, the article delves deep into how the lockdown would impact the poor but never once mentions the PM – Garib Kalyan Anna Yojana, the scheme launched on 26 March 2020 (48 hours after the lockdown), to provide free food grains to 80 crore Indians.

Just for perspective, this detail which the article easily overlooked has until March 2022 (two years from the lockdown), provided over 750 lakh MT of food grains worth Rs 2.6 lakh crore; at around $33 billion as per current rates, almost equal to the GDP of Nepal.

When this approach failed to garner the attention it expected, TIME felt it necessary to add a communal angle to its reportage.

But this wasn’t a one-off occurrence. Throughout the year and well into 2021, TIME continued its trend of maligning India.

The headlines, if considered by the insensitivity and insecurity they wanted to spread, seem to have peaked during the second wave of the pandemic in April 2021 – when India was already grieving the loss of near and dear ones lost to the deadly virus.

A Frightening Picture is a Click-Worthy Picture

It was during this period that TIME published a photo from a cremation ground that showed several funeral pyres still lit.

On the other hand, when deaths began to mount in the West – be it in the USA, France, Italy or the UK – no such insensitive coverage was done.

Out of the basic respect for human life and the pain of those who lost their loved ones during the pandemic, the said cover has not been reproduced here.

India's Fight Against the Pandemic - Another Target

Despite the fact that India’s Vaccine Maitri programme to supply vaccines to nations in need was started in January 2021 along with its own vaccination drive, all that TIME could manage a month later was a misleading headline proclaiming that “India's Vaccine Rollout Stumbles as COVID-19 Cases Decline. That's Bad News for the Rest of the World”.

Furthermore, even the CEO of the Serum Institute in India, Adar Poonawala, who had highlighted the government’s supportive approach to assist vaccine manufacturers, was not spared.

Finally, as India crossed one milestone after another when it came to vaccinations, crossing the 2 billion mark in June 2022, fully vaccinating over 90 per cent of its adult population, TIME remained silent.

Fear Beyond the Pandemic

COVID-19 wasn’t the only aspect that TIME chose for its malicious reporting. It seems that when it comes to India, everything and anything is fair game for running stories that paint a grim picture.

In May this year, as the temperature began to climb and the Monsoons were delayed by a few weeks, the magazine was quick to sensationalise a phenomenon that in reality, was hardly an issue – power cuts.

TIME went as far ahead as to link climate change (high temperature) as a critical factor that is disrupting education in the country.

Moreover, it all but preached a sermon to the world when it claimed that “India’s Unbearably Hot Schools Show We Must Climate-Proof Education”.

Within a span of a few days, another article on how ‘Western’ architecture was resulting in over-heated homes was published.

Scrolling back just a few months, an article actually claimed that a coal shortage in India is good news because even if it may cause power cuts, it would push India towards clean energy.

There were two glaring problems with such an inference:

a) Neither was there a coal shortage nor was India headed that way.

b) Not only is India amongst the top-5 nations with respect to installed capacity of renewable energy, but at the time the article was published, our nation had all but achieved its COP21 targets no less than nine years in advance.

Selective Reportage to Mask Many Positives

Finally, at a time when India has progressed towards achieving Ease of Living for Indians – TIME has found issues that it can highlight to mask the good work that is being done.

An example is the recent ban on the use of single-use plastics which the magazine has chosen to report as a radical policy which is likely to suffer at the implementation stage.

In fact, to drive its point home, the article actually takes into account the impact of the ‘sudden’ change on informal workers and the poorest of the poor.

Not once does the article take notice of the thousands of local and cottage industries that make biodegradable products and now stand to get a boost with the government’s initiative.

Furthermore, the plan to limit and ban single-use plastics was announced by PM Modi in 2019, notified by the government in August 2021 and implemented from 1 July 2022.

Similarly, with social media emerging as the primary tool for spreading misinformation that has the potential to impact national security, the government went ahead with a plan to make social media platforms accountable.

But for TIME this appeared to be an act of “Digital Authoritarianism”.

Given its penchant for unnecessary sensationalism and blowing non-issues out of proportion, it appears – at least to the average reader – that the TIME magazine may very well have crossed the grey area that differentiates journalism from animosity.

In the digital age however, this shift, especially in a nation that excels in tech-adaptability, isn’t something that can remain hidden; however subtle the shift may be.

How China’s Communist Party is infiltrating the global media circuit