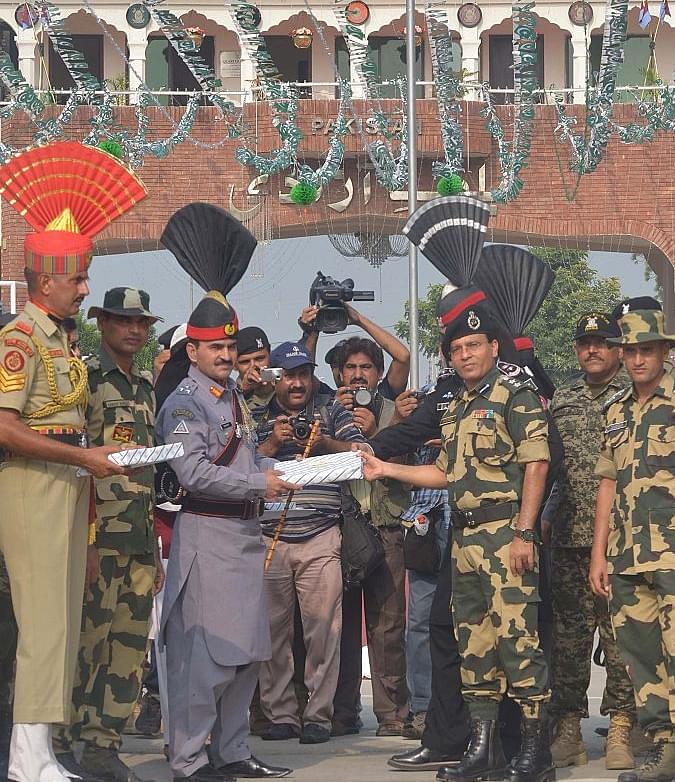 Pakistan marked its 70th Independence Day on 14 August by firing light and heavy machine guns across the border in Poonch early Sunday morning and distributing sweets to India’s BSF at the Wagah border crossing later in the day.

An Indian army source who recently served in Kashmir said the firing which began around 3 am and continued till about 8.30 am, was “not unexpected”, and used as a distraction to let terrorists sneak into India to disrupt its Independence celebrations a day later.

“What is different, however, is that this time the Indian forces have been clearly authorised to respond with three bullets for each one fired by Pakistan,” he said. “As for the terrorists trying to sneak in, we promise to grant each of one them permanent independence-in hell.”

Later in the day, at a formal Independence Day function, Pakistan’s President Mamnoon Hussain reiterated that the country would continue its support to the Kashmiris in their bid for the right to self-determination.

The firing follows days of relentless Pakistani propaganda over Kashmir, which has been in lock down after the massive protests since the killing of a young terrorist by Indian forces last month.

This tirade included the rather bizarre demand by Pakistan’s Prime Minister Nawaz Sharif that India grant visas to Pakistani medical teams, including one run by the Jaamat ud Dawa, the ‘social’ wing of the Lakshar, to treat victims of ‘army and police brutality’ in Kashmir. Most of the violence in Kashmir is incited and instigated by separatists who owe their allegiance to Islamabad despite being ‘Indian citizens.’

Earlier, Pakistan’s foreign adviser Sartaj Aziz said Islamabad had written to the UN Human Rights Council on “human rights violations” in the Kashmir Valley, and that Kashmir would top Pakistan’s agenda at the forthcoming session of the UN General Assembly in New York. A recent conference of Pakistani diplomats had also focused on relations with India, he said, and it “noted that India’s policy of not engaging in a comprehensive dialogue with Pakistan was not conducive for peace in South Asia.”

Pledging that Pakistan would continue to extend diplomatic, political and moral support to the people of Jammu and Kashmir for their fundamental right to self-determination, Aziz reiterated Islamabad’s offer to send ‘supplies’ to the “oppressed” people of Kashmir. He also said Pakistan would formally seek a dialogue with India on Kashmir.

The Indian response was swift and curt. Rejecting the offer to send supplies to Kashmir as “absurd”, Ministry of External Affairs spokesperson Vikas Swarup tweeted: “India and others in the region have already received enough of Pakistan’s trademark exports-international terrorism, cross-border infiltrators, weapons, narcotics and fake currency.”

As for the talks, “India would welcome a dialogue on contemporary and relevant issues in India-Pakistan relations. At this time, they include a stoppage of Pakistani support for cross-border terrorism, infiltration of terrorists like Bahadur Ali, incitement to violence and terrorism across the border, parading of internationally recognized terrorists like Hafiz Saeed and Syed Salahuddin, and sincere follow-up on the Mumbai attack trial and the Pathankot attack investigation in Pakistan,” said Swarup.

Pakistan also offered to sign a bilateral moratorium on nuclear testing, knowing that India has consistently opposed any such bilateral agreement.

According to one report, Pakistani analysts believe a rejection by India could “raise questions about India’s commitment to non-proliferation” at a time when New Delhi is lobbying to get into the Nuclear Suppliers Group. China had vetoed India’s entry at an earlier NSG meeting in Seoul, because India had not signed the Nuclear Non-Proliferation Treaty.

Pakistan, known internationally as Beijing’s vassal and a nuclear proliferator, has also been lobbying for membership of the NSG, and plans to send Aziz and other diplomats to key capitals to plead its case before the next round of discussions. “Our arguments for criteria-based approach, and the impact of any India-specific exemption on the strategic stability in South Asia and on the future of non-proliferation regime have been accepted by several NSG countries,” gloated Aziz. But Beijing’s opposition to India’s entry into the NSG is not written in stone, and Chinese foreign minister Wang Yi, who left New Delhi Sunday after a three- day official visit, reportedly agreed to open discussions on New Delhi’s candidature.

This must be giving many Pakistanis acute panic attacks, said an Indian official, who, however, also admitted that the possibility of Beijing actually relenting was bleak. Wang, who met Prime Minister Narendra Modi and foreign minister Sushma Swaraj, among other leaders, was in India to discuss the G-20 meet in Hangzhou September 4-5, which Modi will attend, and the Brazil, Russia, India, China, South Africa (BRICS) summit being held in Goa in October, which will be attended by Chinese President Xi Jinping. In fact, Wang began his trip in Goa on 12 October, where he met chief minister Laxmikant Parsekar and visited the two exotic beach resorts which have been shortlisted for the BRICS Summit before leaving for New Delhi.

Both Modi and Xi will also be attending the 11th East Asia Summit in Laos on 6-8 September. The Summit, whose 18 members include the 10 ASEAN nations (Brunei, Cambodia, Indonesia, Laos, Malaysia, Burma, the Philippines, Singapore, Thailand, Vietnam) and Australia, China, India, Japan, New Zealand, South Korea, Russia and the United States. According to one official, the pledge to open discussions on India’s NSG membership was probably made in the hope that India would not oppose Beijing’s line at these three meetings. Pakistan belongs to none of the three groups.

Refuting a rumour could land you in jail for 14 years in Bangladesh. Banglamail24.com Executive Editor Maksukul Alam, acting Editor Shahadat Ullah Khan, and reporter Pranta Palash were arrested on 7 August after their site ran a report refuting a rumour that Prime Minister Hasina Wajed’s son Sajeeb Wazed Joy had died in a plane crash. The media accreditation of nine other banglamail24 journalists was also revoked.

“They criticised the rumour, but...they also became part of spreading rumours on the death of the Honourable Prime Minister’s son, who holds an important government post,” Benarnews quoted a police officer dealing with the case as saying.

The three arrested journalists could face charges under Article 57 of Bangladesh’s 2006 Information and Communication Technology Act, which criminalises publishing material online that is “fake and obscene” or creates a possibility of threatening “law and order,” says the Committee to Protect Journalists. “Jailing anyone for even a day under a law as broad, vaguely worded, and restrictive as Bangladesh’s Information and Communication Technology Act is an injustice,” said CPJ Asia Program Coordinator Steven Butler. “Arresting journalists for refuting a false rumour reaches the point of absurdity.”

But for those familiar with Prime Minister Hasina Wajed’s increasingly autocratic ways, this is not unexpected. At least 35 news websites have been blocked by the Bangladesh Telecommunication Regulatory Commission just over last week for publishing “objectionable comments” about the government, while several editors and journalists have been arrested and held without being charged.

In another bizarre development, a body expert hired by the family of Tahmid Khan, a University of Toronto student held under suspicion for his involvement in the 1 July terrorist attack on the Holey Artisan bakery in Dhaka’s Gulshan area, insists he is innocent.

Tahmid, 22, was initially seen as a survivor of the attack in which 20 hostages – 17 of them foreigners--were butchered after they failed to recite Quranic verses. But he and another survivor, Hasnat Karim, were arrested after pictures taken from a nearby building showed Tahmid --holding a gun --and Karim on the roof of the café calmly talking with Rohan Imtiaz, one of the attackers later killed by police.

Handout photos show Canadian student and Bangladesh terror suspect Tahmid Khan (in dark shirt) holding a gun, with Hasnat Karim (another ‘hostage’) and Rohan Imtiaz, on the roof of the Holey Artisan Café on 1 July, used in a report by India Ford, a London-based body language expert.

But India Ford, a London-based body language expert, insists that Tahmid, “without any doubt, (is) an innocent victim caught up in a terrorist atrocity.” “Tahmid’s entire body language is naturally emitting clusters of the most common signs any human will unconsciously display when feeling vulnerable, submissive and extremely fearful for their life,” the National Post, a Canadian newspaper, quotes her report as saying.

“You may be wondering why there appears to be a smile on Tahmid’s face. Well, the reality is that we don’t only smile when we are happy; we also smile when we are feeling out of depth around someone,” says Ford, who boasts of clients like the BBC, Saatchi and Saatchi, Goldman Sachs and Citibank, among others.

According to the Post, Khan’s family believes the video and still images “clearly demonstrate that he was an unwilling participant in the Gulshan (the area of Dhaka) hostage events.” But the question remains: why was an ‘unwilling’ participant holding a gun on the rooftop of a café under siege, hobnobbing with a terrorist?