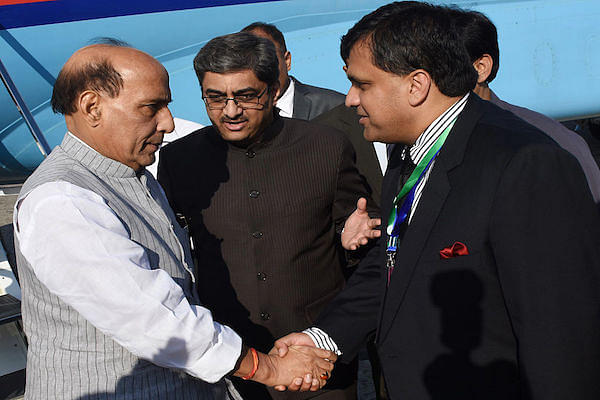 ‘India, Afghanistan and BD close ranks against Pakistan.’ That was a headline in The News, Pakistan’s popular English newspaper, for an article covering the Seventh South Asian Association for Regional Corporation (SAARC) meeting of interior or home ministers in Islamabad on 3, 4 August.

In his address, India’s Home Minister Rajnath Singh urged the other seven members of the group – Pakistan, Nepal, the Maldives, Sri Lanka, Bhutan, Afghanistan and Bangladesh – to denounce terrorism, saying, “Terrorists should not be glorified as martyrs. There is no good or bad terrorism. Terrorism is terrorism.”

While he did not name Pakistan, the reference was obviously to Pakistan Prime Minister Nawaz Sharif’s description of Burhan Wani, the Hizb-ul-Mujahideen terrorist who was gunned down in a firefight with Indian security forces in Kashmir late last month, as a “martyr”.

Pakistan’s Interior Minister, Chaudhry Nisar Ali Khan, was not so subtle. “There is a difference between freedom movement and terrorism,” he responded, asserting that “the violence being committed against the innocent people of Indian Kashmir is open terrorism.”

Singh then skipped the formal lunch at the summit and left for New Delhi earlier than scheduled.

The report in The News, however, dwelt more on the exchange between the two belligerent ministers, and did not elaborate on how Bangladesh and Afghanistan had ‘closed ranks’ against Pakistan.

That was taken care of by Pakistan Today. “At no time in its recent history was Pakistan as isolated as it is today,” it said in an editorial titled ‘Pakistan’s deepening isolation.’

At the last SAARC summit in Kathmandu in November 2014, Pakistan faced only India as a hostile country. Unlike now when Afghan ambassador maintains that Afghanistan and Pakistan are in an undeclared state of war... Relations between Pakistan and Bangladesh had gone cold after Pakistan National Assembly passed a tamped down resolution against the execution of Jamaat-e-Islami leaders in Dhaka... Bangladesh has downgraded its representation at the conference by sending its High Commissioner... The isolation is not confined to SAARC alone. Pakistan’s relations with Iran are no more warm and Washington has shown willingness to forgo its commitments to Pakistan...

(On Wednesday (3 August 2016), The Pentagon said it was withholding $300 million in military assistance to Pakistan over concerns that the government isn’t doing enough to stop militants. It also added the Pakistani militant outfit, Jamaat-ur-Ahrar – a splinter faction of the Pakistani Taliban – to its list of global terrorists.

“Pakistan has a difficult relationship with almost all of its regional neighbour countries,” concurred the Daily Times. “In the west, the relations with Afghanistan and Iran have also deteriorated in recent times. Pakistan and Afghanistan trade accusations and not goods regularly. Moreover, Pakistan has not done much to improve its ties with Iran following the lifting of sanctions on the latter. The only regional country that has good relations with Pakistan is China, but even those relations cannot be described as balanced or on equal terms.”

But given that not just Bangladesh and Afghanistan but almost every other SAARC member sent junior ministers as delegates to the meeting, why did Rajnath Singh decide to attend the summit himself? That too after reportedly arguing earlier that the ‘profile of the meeting did not befit the stature of India’s Home Minister’?

Was it to stare down the terrorist kingpin and Lashkar head, Hafiz Saeed, who had warned of nationwide protests in Pakistan if Singh were to visit the country? Or was it to prepare the ground and context for Indian Prime Minister Narendra Modi’s trip to Pakistan for the SAARC summit later this year? At the moment, only Singh knows.

In other news from Pakistan, an M-17 helicopter carrying four retired Pakistan Army men and a Russian pilot crash-landed in Taliban-controlled Azra district of Afghanistan’s eastern Logar province on Thursday (4 August 2015). Military authorities said the helicopter was heading to Russia via Afghanistan and Uzbekistan for routine maintenance, and denied rumours that a relative of Army chief Raheel Sharif was on board.

On Saturday, Pakistan’s Interior Ministry spokesman Sarfaraz Hussain said that Federal Investigation Agency officials arrested a blacklisted American, Mathew Craig Barrett, from an Islamabad guest house. Barrett had been deported and blacklisted in 2011 after being found in the area of a sensitive installation, and had entered Pakistan again with fake papers, he added.

Prachanda back in Nepal

Meanwhile, in Nepal, Pushpa Kamal Dahal, also called Prachanda, the chief of the Communist Party of Nepal (Maoist Centre), was elected as the Himalayan nation’s 39th Prime Minister on 3 August. His earlier stint as Prime Minister (August 2008 to May 2009) was cut short following unrest over his decision to sack the army chief. Dahal blamed India for toppling him and pledged to move closer to China. Although he had hailed Indian Prime Minister Narendra Modi’s 2014 visit to Nepal as historic, saying the trip had touched Nepali hearts, Dahal’s close ties with Beijing has Indian foreign policy mandarins worried.

Further east, authorities in Bangladesh announced a cash reward of $25,000 each for the capture of Tamim Ahmed Chowdhury, said to be the mastermind behind the 1 July attack on the Holey Artisan Bakery, and former army major, Syed Mohammad Ziaul Haque, who heads the Ansarullah Bangla Team, responsible for the spate of attacks on secular writers and intellectuals in the country. Earlier, there were reports that both the wanted men may have sneaked into India following the crackdown in Bangladesh.

While the Daesh, or Islamic State, has claimed responsibility for the café siege and some of the other brutal attacks on ‘apostates’ in Bangladesh, Dhaka is adamant that local Islamic zealots were responsible.

In Myanmar, India announced plans to set up a Special Economic Zone (SEZ) in Sittwe, where it has already built a port. According to the Economic Times, “the proposed SEZ by India will rival Chinese SEZ located 80 km down of strategically-located Sittwe as Delhi plans to make it as an economic hub.”

Down south, AFP reports that following Indian objections, Sri Lanka was withdrawing permission for a Chinese company to buy the freehold to 20 hectares of land being reclaimed under a $1.4 billion port project, after India objected.

“India had a big concern about giving freehold land to China near the Colombo harbour,” government spokesman Rajitha Senaratne told reporters. “We have amended the agreement. There will be no freehold land but it will be on a 99-year lease,” AFP quoted him as saying.