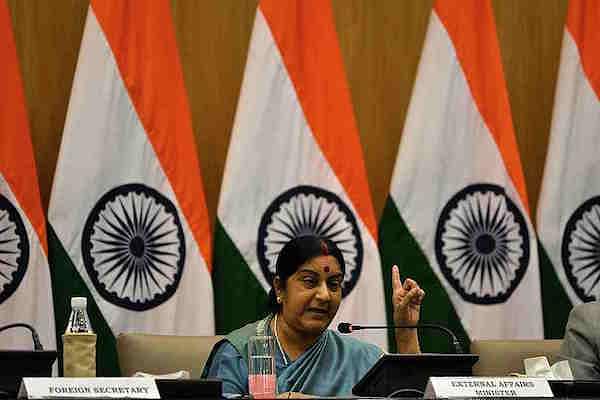 If Pakistan feels that it will keep playing with terrorism and use it as a tool against India, then we can tackle the challenge. But they won’t be able to tackle it. You (Pakistan) are committing suicide.

Akbar’s 15-minute intervention followed charges by the Congress that the recent trouble in Kashmir was due to the BJP government’s irresponsible attitude towards the troubled state.

“This government is being irresponsible towards Kashmir while during the UPA regime peace, harmony and developmental works were established,” declared Congress member of Parliament Jyotiraditya Scindia, who also accused Prime Minister Narendra Modi of ‘beating drums abroad’ while Kashmir was burning.

Describing the 70-year-old dispute over Kashmir as the longest war in the world’s history, Akbar said this was an existential battle between proponents of the Two-Nation Theory and those who believed in an inclusive, secular nation.

It is perhaps important to remember this when we respond to Pakistan Prime Minister Nawaz Sharif’s remark that he was “waiting for the day Kashmir becomes part of Pakistan.” (Kashmiris seeking ‘azadi’, or independence, should note that Sharif’s wish does not allow for that possibility.)

Pakistan observed “Kashmir’s Accession to Pakistan Day” on 19 July and a ‘Black Day’ on 20 July to mark the killing of Hizb-ul-Mujahideen terrorist Burhan Wani in Kashmir by Indian security forces on 8 July.

A two-day Kashmir Karwan (Caravan) from Lahore to Islamabad was addressed by terrorists like Lashkar-e-Taiba chief Hafiz Saeed, who has a US$ 10 million bounty on his head, and Hizb-ul-Mujahideen leader Syed Salahuddin, who pledged that the blood of Muzaffar Wani would not be wasted.

According to The News, Siraj said Pakistanis wanted to give a message to Syed Ali Gilani, Mirwaiz Umar Farooq, Yasin Malik, Shabbir Ahmad Shah and other Kashmiri leaders and people that the citizens of Pakistan were behind them in their struggle for freedom from India.

“We want to assure them that the Pakistanis will continue to support them till they achieve their goal,” he said, and “those lobbies in Pakistan which hate Jehadi culture should leave Pakistan and better move to India.”

(I have always wondered why the Government of India continues to feed, protect and guard these namakharams, or traitors, from Kashmir named above, but that is another story.)

Nawaz Sharif’s offensive remark came after his Pakistan Muslim League won 31 of the 41 seats in the 21 July ‘elections’ held in Pakistan-occupied Kashmir.

India’s response was along expected lines. Reiterating that the entire Kashmir belonged to India, External Affairs Minister Sushma Swaraj declared that Pakistan could never “make this heaven on earth a haven for terrorists”.

“A country which used fighter planes and artillery against its own people has no right whatsoever to point a finger against our security forces,” she said, adding that Sharif’s “dangerous, delusional” desire would never be fulfilled.

“India asks Pakistan to stop inciting and supporting violence and terrorism in any part of the country. Pak must also stop misleading the international community and Kashmiris through meaningless exercises such as the so-called elections today in PoK, which Pakistan ironically calls ‘Azad’ [free].”

A statement released by the Indian Ministry of External Affairs

Coming back to Akbar, it is important to understand that any Indian concession on Kashmir would be a major victory for the discredited two-nation theory and a huge insult to the 172 million Muslims in India, barring the secessionist named by Siraj above.

In the brouhaha over Kashmir, two other significant events in the region went under the radar.

One was the joint patrol by Chinese and Pakistani forces near the border of Pakistan-occupied Kashmir and China’s Xinjiang province. This patrol in the Gilgit-Baltistan region by a ‘defence regiment of the People’s Liberation Army (PLA) and border police force from Pakistan’ is bound to raise flags in India, already worried over the deepening Chinese footprint in the region.

The other was the Chinese response to reports that India had moved tanks to the Ladakh region bordering China to counter the Chinese buildup in the area.

“A media report stating that nearly 100 Indian tanks have been positioned near the Indo-China border to counter any possible threat grabbed peoples’ attention as more Chinese firms are looking to increase their investment in India,” said the state-run Global Times.

“However, it is puzzling that while deploying tanks near China’s border, India still strives to woo Chinese investment,” it said, warning that this “may hit a nerve within the Chinese business community, causing investors to weigh the threat of political instability when they make investment decisions.”

China is also disturbed by the political instability in Nepal, where Minister KP Sharma Oli’s government faces a no-confidence motion despite frantic efforts by Beijing to help him retain his seat. Oli, who heads Nepal’s eighth government in the past decade, has made no bones about his pro-China leaning, and many in Nepal believe India is behind the no-trust motion moved by the Nepali Congress and the Maoists.

On Thursday, Nepal’s Minister for Information and Communications, Sher Dhan Rai, said that the no-confidence motion was an attempt to thwart the visit of Chinese President Xi Jinping to Nepal. The opposition was worried that the government would take credit for the economic benefits expected from President Xi’s visit, he argued.

New Delhi, while swearing non-interference in Nepal’s internal matters, worries that any perception that India is behind Oli’s ouster would strengthen the growing anti-India sentiment in Nepal.

But as a senior official put it privately, “to expect that India will sit on its hands while Chinese officials blatantly bribe, cajole and threaten the opposition in Nepal to keep Oli in power would be foolish.”