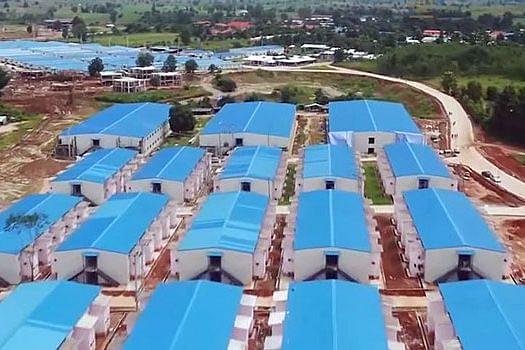 The Chinese have been surreptitiously building a mega city spread over 730 square kilometres on the Myanmar-Thailand border to accommodate an estimated four lakh Chinese.

The $ 15 billion Shwe Kokko City Development Project on the banks of the Moei river that divides Thailand and Myanmar has ostensibly shocked the country’s rulers, who have belatedly woken up to the project and have now constituted a tribunal to probe the entire project.

Myanmar’s federal authorities say they had no idea that the Chinese had scaled up the project. In mid-2018, the Myanmarese authorities had granted permission to Myanmar Yatai International Holding Group Co Ltd — a joint venture between Chinese conglomerate Jilin Yatai Group and the Kayin State Border Guard Force (read more about this former militia here) — to construct 60 villas in a little over 25 acres of land with an investment of $ 22.5 million.

But work on the project had already commenced in mid-2017. And within a few months, the Chinese had taken over huge parcels of land from locals (who got petty amounts) and started building condominiums, villas, mega shopping malls, an international airport, roads and boulevards and other facilities over 73,000 hectares.

The Shwe Kokko City, for all practical purposes, will be a big Chinese outpost in Myanmar populated by an estimated four lakh Chinese.

According to reports appearing in newspapers of Myanmar, the Chinese bribed local administrators in Kayin (Karen) state in southwestern part of the country bordering Thailand (see this map of the state outlined in red).

The state is under the effective control of the Kayin State Border Guard Force (BGF) led by Colonel Saw Chit Thu. The BGF was earlier known as the Democratic Karen Buddhist Army (DKBA) which was engaged in fighting federal government forces for greater autonomy of the Karen state.

The DKBA signed a ceasefire agreement with the Myanmarese military, called the ‘Tatmadaw’, more than 25 years ago and transformed itself into the BGF that enjoys a measure of autonomy in overseeing the affairs of the Karen state.

The BGF has been allowed by the Myanmarese federal authorities to run various businesses, both licit and illicit, in return for its loyalty to the central government.

Shwe Kokko, which was once a tiny fishing village, lies 15 kilometres north of Myawaddy on the Myanmar-Thailand border. The ‘Friendship Bridge’ which spans the Moei river connects Myawaddy to the Thai town of Mae Sot. Myawaddy is about 400 kilometres by road west of Yangon.

According to this report in The Irrawaddy, a popular English daily in Myanmar, the Myanmar Investment Commission (MIC) had originally approved acquisition of only 25.5 acres for the $ 22.5 million project for construction of only 59 villas. But very soon, the Myanmar Yatai International Holding Group declared that the project would encompass 214 acres.

After a few months, the Jilin Yatai group unilaterally declared that the size of the entire project had increased to 29,652.6 acres and the cost to $ 500 million and that the township would have villas, hotels, casinos and an airport.

Myanmarese media suggests that no approval was taken from the federal government and local officials and politicians, including senior members of the BGF, were heavily bribed by the Chinese.

The Kayin state government had originally leased 68 acres to BGF’s Colonel Saw Chit Thu, but the BGF started taking over land from locals for a pittance with the promise of jobs in the project.

Instead of locals getting jobs, thousands of Chinese workers have been brought in surreptitiously through Thailand to work on the project.

According to this investigative report in Frontier Myanmar, a bold and independent media outlet, work on the project got underway in early 2017 without any approval from the federal government.

The Myanmar Yatai International Holding Group Co Ltd had only registered itself with the Myanmarese authorities in February that year and entered into a partnership agreement facilitated by the China Federation of Overseas Chinese Entrepreneurs (a body tightly controlled by the Chinese authorities) with Colonel Chit Thu.

The Jilin Yatai Group took the registration and partnership agreement to be good enough to start work on the project. The federally-administered Myanmar Investment Commission (MIC) gave its approval for the first phase of the project (60 luxury villas to be built on 10.3 hectares at a cost of $ 22.5 million) in July 2018. But by then, the developers had scaled up the project to make a full-fledged city.

The Frontier Myanmar report says the project will cover an area of 72,843 hectares (180,000 acres) and entail spending of $15 billion.

The Shwe Kokko project is believed to be the largest overseas investment by Yatai, which says it is expected to be completed in 2027 (read this exhaustive report and also this by renowned Swedish journalist Bertil Linter).

While both passed the buck, the project continued at a frenetic pace till it was temporarily halted by the federal government late last year after newspaper reports on how the Chinese were secretly developing a city without necessary approvals sparked nationwide outrage.

Ethnic Chinese who have managed to procure Malaysian and Cambodian citizenships (fraudulently or otherwise) are shown as directors of Myanmar Yatai International Holding Group Company Ltd and hold 80 per cent of the shares while Colonel Chit Thu’s BGF holds the remaining 20 per cent.

The project has even sparked concerns across the border in Thailand, reports the Bangkok Post.

Strategic Importance Of This ‘Chinese Outpost’

The Shwe Kokko city, with its four lakh odd Chinese nationals, will be just 15 km from Myawaddy that is the gateway to Thailand and falls on Asian Highway 1. The Chinese will be able to control movement along this highway which will soon emerge as a major trade route between India and Southeast Asia.

The proposed city is expected to have Chinese security. As has been the case with similar projects in many countries in Asia and Africa, it is China's notorious People’s Liberation Army (PLA) that guards such Chinese projects.

Even now, according to Myanmarese media reports, Chinese guards strictly monitor movement of outsiders into the project site and even government officials have to seek prior permission to visit the project site.

Though the Jilin Yatai group proclaims to be a private entity, it is suspected that as with all Chinese conglomerates, higher-ups in the country’s communist dictatorship and the PLA hold a large percentage of the shares in the group. That makes the activities of the group, especially this project, suspect.

Probe Likely To Be Exercise In Futility

The media and independent voices in Myanmar have doubts about the fairness of the probe ordered by the federal government into the project. That’s because the Tatmadaw still calls the shots in Myanmar, and the project has the blessings of the men in uniform.

Also, after locals protested in April last year about thousands of Chinese workers employed at the project site, an investigation was ordered.

The investigation team led by state Minister for Security and Border Affairs, Colonel Myo Min Naung — a serving Tatmadaw officer — conducted ‘surprise checks’ at the project site in May 2018, but reported it had not found any illegal Chinese workers.

The investigation team reported that only a hundred Chinese workers holding valid passports and Myanmar-issued work visas were working on the project which had not violated the permissions granted to it.

However, locals have strongly contested the report which, they say, is full of lies.

“The Chinese have given huge bribes to all people in power and they have a lot at stake in this project. Hence, despite the noises being made now, work will resume and the project will progress as planned,” said a senior journalist, who writes under the pseudonym of U Ba Tin (read this report).

But that does not mean that local anger over the project will die down, says this report in Indo-Pacific Defence Forum (also read this report titled 'Shwe Kokko — A Secret Chinese City' in the reputable Myanmar Peace Monitor).

The Karen people say that the city will be a gambling den and will become a hub of money laundering, prostitution, drug abuse and a whole range of illicit and immoral activities, all patronised by rich Chinese. Shwe Kokko is destined to become a ‘city of sin’ for the hedonistic Chinese. And a secure outpost for expansionist China’s armed forces.