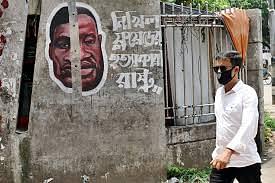 A fortnight ago, Assistant Sub-Inspector Shamim Hasan of Kotalipara Police Station in Bangladesh’s Gopalganj district pinned Nikhil Talukdar to the ground with his knees and broke his spinal cord. Talukdar, 32, died the next day (3 June).

Though separated by thousands of miles, the unfortunate deaths of Talukdar and George Floyd in Minneapolis (Minnesota) were similar. But while Floyd’s killing triggered outrage spanning continents, Talukdar’s has become just a statistic. This is the shameful, heart-rending and continuing saga of persecution of Hindus in Bangladesh.

Though Talukdar’s killing by a cop received media coverage in Bangladesh and India, the hypocritical silence of the otherwise vociferous human rights activists and the ‘left-liberal’ cabal was deafening.

More so since this killing was not a one-off incident, but one in a ceaseless series of murders, rapes, abductions, forcible conversions, assaults and displacements, interspersed by periodically deathly genocides, that Hindus in Bangladesh have been subjected to for a long time now.

Right from the beginning of the last century, Hindus in what was then east Bengal started being routinely targeted by Muslims. Physical assaults on Hindus, molestation and rapes of Hindu women, their abductions and forcible conversions to Islam, grabbing of lands belonging to Hindus, desecration of temples and wanton murders of Hindus became commonplace.

The Noakhali riots which Mahatma Gandhi failed to stop became one in the long list of genocides against Hindus in east Bengal and then east Pakistan.

After 1947, the intensity of attacks on Hindus only increased, and the periodic pogroms against Hindus in the decades after that have been well-documented (read this, this and this).

During Operation Searchlight launched by the Pakistan Army in March 1971, an estimated 30 lakh Bengalis were killed and 4 lakh women raped by Pakistani soldiers aided by the Islamist militia. Most of the victims were Hindus.

In this interview, Benkin says that the present Awami League government lends tacit approval to anti-Hindu activities and attacks on Hindus.

Benkin, who had taken up the issue of persecution of Bangladeshi Hindus with Prime Minister Narendra Modi a couple of years ago, says the persecution will continue as long as India remains silent on it.

“These are only the reported cases. The actual number of cases will be at least 10 times the documented ones since victims are very often too scared to report to the police, who are mostly biased,” said Bangladesh Jatiya Hindu Mahajote leader Bimalendu Das.

A report by the Mahajote says that attacks on Hindus increased in 2019: Hindus faced 683 attacks across the country in which 31,505 were affected. A total of 108 Hindus were killed and 484 injured in 2019 as against 88 killed and 347 injured in 2018. This report was based on newspaper reports and complaints lodged with the police.

The Mahajote report says that 79 business establishments of Hindu community were attacked, 434 families were evicted, 641 families were threatened to leave the country and 2,261 families suffered due to lack of security in 2019.

According to the Bangladesh chapter of the World Hindu Federation, in the month of May this year alone four Hindus were murdered, 12 Hindu homes were looted, 435 acres of land belonging to Hindus were forcibly occupied, 10 temples attacked, 43 Hindu families displaced, four Hindu women raped and 13 molested, and three Hindus were forcibly converted to Islam.

“On the ground, leaders of the (ruling) Awami League are as complicit as those of the opposition BNP and the Jamiat-e-Islami in carrying out atrocities against Hindus. Their prime motive is to forcibly oust Hindus from their lands and grab them. The entire administration helps the land grabbers. The attacks on Hindus, rapes and molestation of Hindu women and desecration or destruction of our temples are aimed at driving us out of Bangladesh,” said Das.

Professor Abdul Barkat of Dhaka University, who documents persecution of Hindus in his country, says that Hindus will become an extinct community in Bangladesh by 2045.

According to his estimate, about 45 per cent of all land that used to belong to Hindus have been forcibly taken over. The US State Department puts this figure at 2.5 million acres.

“Hindus of Bangladesh are one of the most persecuted communities in the world. But unlike the Rohingyas or others whose plight is highlighted by the entire world, this community is always neglected and has to suffer in silence. This has to change and India has to play a major role in this,” said Benkin, who is a Jew.

Barkat and others sympathetic to the sorry plight of Hindus in Bangladesh say that while the country’s Islamists target Hindus for obvious reasons, the daily persecution that the Hindus face is primarily because their tormentors want to take over their lands.

“Hindus are vulnerable and so politicians and influential people at the local levels target them to take over their lands and properties and displace them,” said Barkat.

The means employed by these land grabbers range from physical assaults and rapes of women to attacks on temples, he added.

The persecution of Bangladeshi Hindus, says the Bangladesh Jatiya Hindu Mahajote and others like Benkin and Barkat, will continue until India takes up the issue very strongly with Bangladesh and also at forums like the United Nations. The fear of rupturing the current cordial ties between the two countries should not hold India back from doing so.