How Far Can India and Japan Take Their Trade Ties? 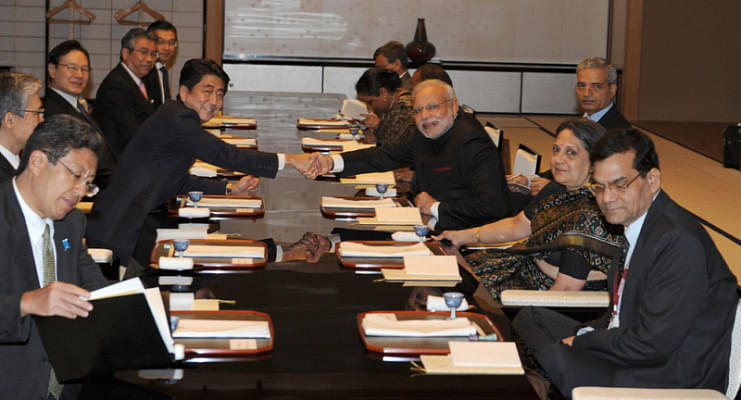 Indo-Japanese economic relations are exhibiting a new surge. The present-day importance and future prospects of India for Japanese companies are well understood by the business community.

Indo – Japanese economic relations are exhibiting a new surge. The present-day importance and future prospects of India for Japanese companies are well understood by the business community. India has the fastest-growing middle-class society in Asia, expected to grow by almost 20 percent in the next five years. The Japanese economy is highly advanced, with the services sector accounting for 68 percent of the GDP. The industrial sector, once the engine of Japan’s growth, now contributes only 30 percent to the GDP while the agricultural sector accounts for one percent. Similarly, the services sector is the largest contributor to India’s GDP, accounting for 52 percent while agriculture and industry contribute 18 percent and 30 percent respectively. The two countries, therefore, share a similar structure, especially about their reliance on the services sector. In recent years, India and Japan have strengthened bilateral ties through new initiatives and programmes ranging from economic and cultural linkages to defense and security.

A Recap of Indo-Japan Trade Relations

Economic relations between India and Japan have vast potential for growth, given the obvious complementarities that exist between the two Asian economies. Japan’s interest in India is increasing due to a variety of reasons including India’s huge and growing market and its resources. The signing of the historic India-Japan Comprehensive Economic Partnership Agreement (CEPA) and its implementation from August 2011 is expected to further accelerate the growth of trade, economic and commercial relations between the two countries. The share from the India-Japan bilateral trade has been hovering around 1 per cent of Japan’s total foreign trade while it was in the range of 2.2 to 2.5 per cent of India’s total trade in the last couple of years. India’s primary exports to Japan have been petroleum products, chemicals, non-metallic minerals, fish and fish products, metalliferous ores and scrap, animal feeds, iron and steel products, clothing and accessories, textile and fabrics and machinery, etc. India’s primary imports from Japan are machinery, iron and steel products, electrical machinery, transport equipment, plastic materials, metal products, etc.

Japan has been extending the bilateral loan and grant assistance to India since 1958. Japanese ODA (Official development assistance ) supports India’s efforts for accelerated economic development particularly in priority areas like power, transportation, environmental projects. Japanese ODA, for long the backbone of the bilateral relationship, still continues to provide long-term loans for India’s infrastructural development. Japan and India agreed in 2007 to increase two-way trade flows to $20 billion by 2010. However, the total fell short of the target, reaching only 1290 billion yen (around $15.85 billion). For 2011-12, India-Japan bilateral trade stood at $18.31 billion, representing an increase of 32 percent over the previous year. The comprehensive trade pact between India and Japan aims to double nearly bilateral trade to $25 billion.

Japan is looking to boost trade and investment ties with India. The reasons behind this interest in India are obvious. India offers a large domestic market base. Besides, mutual synergies between businesses in the two countries are driving initiatives-

The Comprehensive Economic Partnership Agreement (CEPA) between India and Japan was signed on 16th February 2011 and came into force on 1st August of the same year. Apart from accelerating business activities, the deal aimed to eliminate tariffs on 90 percent of Japanese exports to India, such as auto parts and electric appliances, and 97 percent of imports from India, including agricultural and fisheries products, until 2021. The agreement had two major concerns, namely: the infrastructure in India, and non-tariff barriers in Japan.

On the infrastructure front, the two countries agreed to collaborate on the huge, US $90-billion Delhi–Mumbai Industrial Corridor (DMIC) project in 2006. The key agenda of the DMIC project involves the development of nine industrial zones; a high-speed freight line; three ports; six airports; a six-lane intersection-free expressway; and a 4,000- megawatt power plant. The project agreement appears highly promising in the environment of the new manufacturing policy whereby India is targeting to increase the share of manufacturing in GDP to 25 percent within a decade, potentially creating 100 million jobs.

An important factor affecting Indo-Japan trade is the tariff and non- tariff barriers imposed by both countries. Japan has placed import prohibitions and quantitative restrictions on imports from India, for example, on fish and silk items. Japan’s Sanitary and Phytosanitary Measures (SPS) are major barriers to Indian exports of poultry, meat, shrimps and fruits like mangoes and grapes. This issue highlights the need for sharing and facilitating the exchange of technology under the agreement to promote Indian exports to Japan. Similarly, Japanese exports to India also face high tariffs that act as a major impediment to exports from Japan. Therefore, analyzing the tariff and non-tariff barriers to trade in both the countries would be mutually beneficial to enhance trade relations.

Now, there are complementarities between the two countries regarding economic structures and future outlook. Any future agreement should not only focus on increasing trade and investment flows between the two economies by removing the existing barriers on both sides but should also emphasize co-operation and technical collaboration in various sectors. Co-operation is needed especially in those sectors in which trade complementarity is high, and this should be done through both government and private initiatives. Japan and India could collaborate in the fields of biotechnology, nano technology, automobile, aerospace, and other industries. India’s fast-expanding economy will create a large demand for energy. There are many opportunities for collaboration between Indian and Japanese companies in the area of energy efficient and environment-friendly technologies. The agreement is expected to increase exchanges in IT, ITES, financial services, construction, transportation and health-care services.

Overall, India-Japan CEPA is a major step in enhancing bilateral relations and also to promote the economic rise of Asia. While in trade it would be beneficial to both the countries and particularly for India, Japan would find it easier to invest in India and cater to the huge domestic market as well as use it as a manufacturing hub using cheap labour. Further, mutual collaboration in many important sectors such as energy, research and development, etc. would be beneficial for both the economies.

India’s ambition to produce clean nuclear energy in future depends heavily on Japan as its manufacturers provide essential parts of nuclear reactors to USA, France and other nuclear equipment suppliers group. The improved cooperation would open up new opportunities to both countries in every sphere that are essential for harmonious growth of Asia, which is the growth centre of the world in the coming century.