The Himalayan Snub: What China Wanted In Nepal But Couldn’t Get 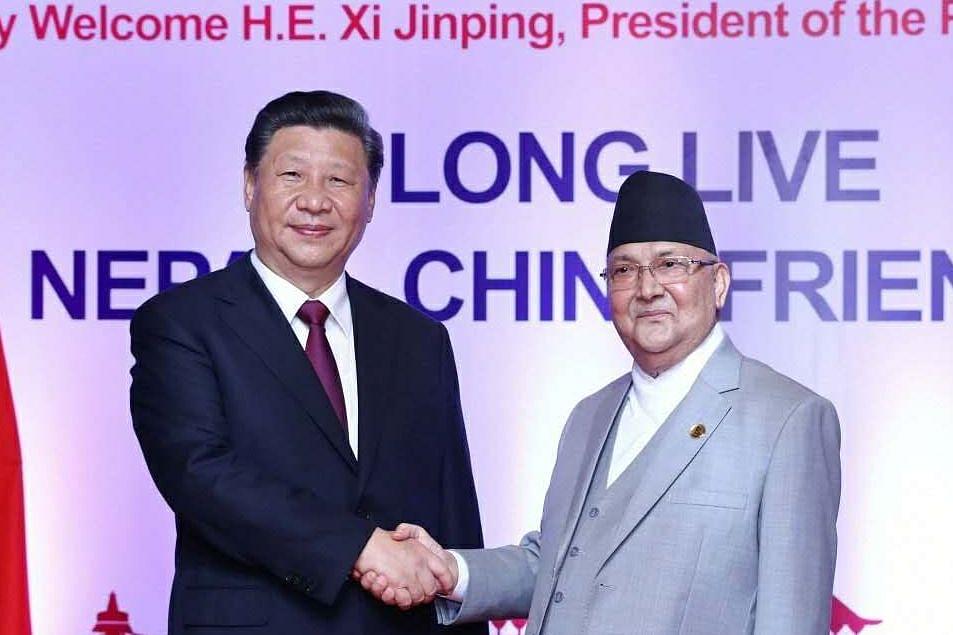 Though the joint communique issued by the two countries listed many projects and proposals, a careful examination would reveal that save a handful, most of the promises made by Beijing were vague. China, displeased with Nepal’s refusal to sign on the dotted lines, did not offer any specific action plans on most projects on Kathmandu’s wish list.

Here are the key proposals by Beijing that Kathmandu turned down:

China has, for long, been pushing Nepal to sign an extradition treaty and the two sides have been engaged in talks over that for quite some time.

However, Nepal announced on the eve of Xi’s visit that the treaty was off the table for now. Lawyers, human rights activists and lawmakers fear that China’s actual intention is to get Tibetans, who have taken refuge in Nepal extradited to China and then throw them in its infamous dungeons.

Nepal is home to some 20,000 Tibetan refugees and their stature is uncertain since Nepal is not a signatory to the Geneva Convention and Protocol Relating to the Status of Refugees.

Bowing to pressure from China, Nepal has in recent times stopped Tibetans fleeing persecution in Chinese-occupied Tibet from entering Nepal. Anti-China demonstrations are banned in Nepal and on the eve of Xi’s visit, police arrested many ‘Free Tibet’ campaigners and human rights activists.

Beijing wants these refugees extradited to China, and had assumed that with the pro-China Communist leader K P Sharma Oli as Nepal’s Prime Minister, it would be able to push through an extradition treaty. But firm opposition from within the ruling Nepal Communist Party (NCP), as well as the opposition Nepali Congress, and activists deterred Oli from bowing to Beijing’s wishes.

Ultimately, only a Mutual Legal Assistance Treaty (MLAT) was signed between the two sides. But even this treaty, say many in Nepal, is fraught with dangerous consequences for Tibetan refugees in Nepal. Nepal’s media have carried reports (read this) quoting senior lawyers who say that the MLAT is a prelude to signing the extradition treaty.

In fact, the joint communique noted that while the two sides (Nepal and China) “were also satisfied with signing the Treaty on Mutual Legal Assistance in Criminal Matters and expressed hope for an early conclusion of the Treaty on Extradition”.

But officials in Nepal’s Ministry Of Foreign Affairs told Swarajya that Kathmandu did not offer any assurance on signing an extradition treaty. “The ‘hope’ for signing such a treaty is a vague one,” said an official.

According to foreign policy experts, Xi’s frustration over the failure to get Nepal to sign the extradition treaty was apparent when he hit out at China’s opponents from Nepal soil. China’s authoritarian leader said in Kathmandu: “anyone attempting to split China in any part of the country will end in crushed bodies and shattered bones”.

While Xi was said to be referring to the mass protests in Hong Kong, his statement that “those who engage in separatist activities in any part of China will be smashed into pieces” was aimed specifically at Tibetan refugees.

It is very uncharacteristic for a visiting leader to issue such dire threats from foreign soil, and experts say it was the outcome of Xi’s frustration.

The Chinese also did not have their way with their offer of assistance to set up the proposed NDU. China had built the Armed Police Force Academy in Kathmandu in 2017 and when Nepal’s Defence Minister Ishwor Pokhrel visited China in October last year, he formally requested the Chinese for assistance to build the NDU.

US Deputy Assistant Secretary of Defense for South and Southeast Asia, Joe Felter, also offered US assistance for the NDU during his visit to Kathmandu in February this year. New Delhi has also offered similar assistance to Nepal.

Oli and a few top pro-China leaders in the ruling NCP were keen on accepting Chinese assistance for the NDU. China had offered to not only construct the university, but also design the courses, install computer hardware and even depute experts to teach at the proposed university. This sent alarm bells ringing and triggered a strong opposition to any Chinese help for the NDU.

“The Chinese had offered to design the software for training modules in the proposed NDU. This, and their proposal to depute their military experts, triggered grave concerns and were viewed as an insidious attempt to establish a grip on Nepal’s defence structure,” said the senior official in Nepal’s Ministry of Foreign Affairs.

Many leaders within the NCP, serving and retired generals, diplomats and high-ranking officials counselled Oli to drop his plans.

Another deal that fell through to China’s chagrin was the one on a new parliament building in Kathmandu. China had offered to fund the construction of the building and, once again, install computer hardware and software.

But many in the NCP and other political parties, especially former prime minister Baburam Bhattarai, cautioned Oli against accepting Beijing’s help that comes with many strings attached.

Bhattarai and others advised Oli to consider India’s offer for constructing the building, citing the internationally-acclaimed reconstruction of Afghanistan’s parliament building by India that Prime Minister Narendra Modi inaugurated in 2015.

China had also wanted to embrace Nepal in a vice-like bear hug through a comprehensive defence and strategic agreement. Beijing wanted to fund construction of roads along the Nepal-Tibet border in return for Kathmandu allowing Chinese PLA troops to use those roads within Nepal’s territory. These two proposals also triggered serious alarms in Nepal.

The Chinese had wanted Nepal to sign an agreement that would strengthen cooperation between the defence forces. Apart from training Nepal Army officers, Beijing had also offered to share PLA military hardware and software with Nepal.

But Beijing’s proposal, according to officials in the defence and foreign affairs ministries who examined it, very cleverly worded to end Nepal’s military ties with other countries, especially India.

“There were some provisions in the draft proposal that would have ended military ties with other countries. For instance, one clause said that officers who undergo training offered by the PLA would be barred from attending similar courses in other countries. There were some provisions that would make Nepal exclusively dependant on China for all military hardware and training,” said an official.

These, and some other such proposals, were deemed unacceptable by Nepal’s military top brass. Strong opposition from them led to Kathmandu rejecting Beijing’s offer.

The armies of Nepal and India have enjoyed close ties and the army chiefs of the two countries are even ‘honorary generals’ (read this) of each other’s armies. Beijing, felt the defence establishment in Kathmandu, wanted to disrupt this relationship.

Nepal, thus, declined China’s offer. Instead, it proposed that China offer help in training Nepal’s police force. Beijing had to accept this proposal to “strengthen cooperation between law enforcement agencies”.

But this, too, has triggered a lot of disquiet in Kathmandu because of lack of clarity on the contours of this proposed ‘strategic partnership’.

The Chinese are known to be verbose, but the verbosity is designed to conceal their true intentions. And it is from this that the suspicion about China’s intentions has sprung in Kathmandu (read this). China has been nudging Nepal to enter into a ‘strategic partnership’ with it, but Kathmandu has held out.

The officials in the defence and foreign affairs ministries in Kathmandu that Swarajya spoke to however said that not much should be read into this part of the joint communique. Nepal agreed to inclusion of the ‘strategic partnership’ proposal as a concession to China after rejecting the other proposals that Beijing was keen on.

They pointed out that this particular proposal was intentionally kept vague and open to interpretation to suit both China and Nepal.

Xi’s visit to Nepal, thus, did not go off as Beijing had hoped. That a ‘friendly’ prime minister (of Nepal) would not ultimately agree to proposals that Beijing was keen on came as a rude shock to China.

And, in anger, it did not commit itself very firmly to the infrastructure projects that Nepal was keen on. The dragon, thus, could not dig its claws into the Himalayan nation.