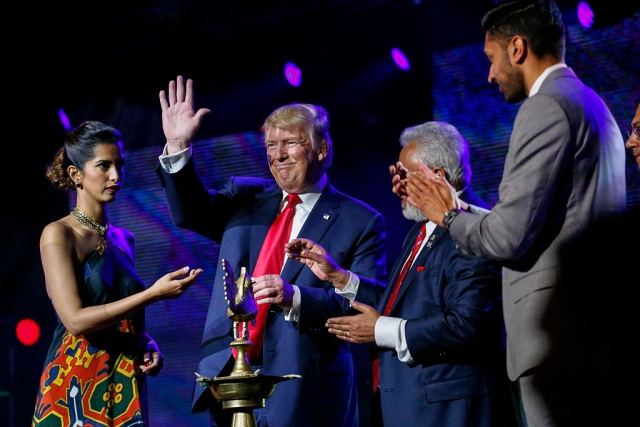 Mainstream Media (MSM) worldwide, has this habit of blowing things out of proportion. The last few days demonstrated it beyond any doubt, as the results of the US presidential elections started pouring in. India’s English media did not have to do its mea culpa act as abjectly as the major print and electronic media in the West had to do, including most of the East Coast heavies like the New York Times and company. This is because the Indian biggies just do not have the necessary resources to send their foot-soldiers to cover elections in the US and chose, in many cases, to take syndicated pieces from their Anglo-American counterparts.

The US print and electronic leviathans had a few really bad days and I am sure there will be painful introspection about why and how they missed the cues. Across the pond, The Economist, still quoted reverentially by most of the Lutyens Delhi gang, when it pontificates on Indian matters without knowing the basics, got it woefully wrong like the rest of its cousins on the other side of the Atlantic.

These characters will carry on, without remorse, or discomfort. As Ben Hecht, the incisive American writer whom I first read in college, said about journos, “The hand of God reaching down into the mire, wouldn’t succeed in elevating them to the depths of degradation, not by a thousand miles”. This introspection is an exercise that will primarily need to be undertaken by the Americans.

However, this brings me to the core issue that we need to explore and assess in depth. Are we, as a country, people, and society, jumping the gun when we comfortably predict a certain pattern of Indo-American relations when Donald Trump assumes office and settles down to governing? Any meaningful answers will only emerge if we can successfully dissect the fundamental nature of America and the factors that propelled Trump into an unexpected victory. Unexpected, of course, for the uninitiated.

A quick and probing look at America, to start with. Unless we have a nodding acquaintance with the beast, any analysis will be imperfect. Most Indian thinkers and analysts who are affiliated with the current socio-political regime put on rose-tinted glasses when they look at the US – a complete somersault from the cynical and pathological hostility that the Indian left has mechanically displayed for the last 80 years. This writer ventures to say that both these polar opposites are wrong, uninformed, unjustified and illogical positions that can only lead us astray.

Therefore, let us start with the origins of the US before we go further down the road. What is clear is that the US owes its birth to the first and most successful land-grab ever in the history of mankind – a copybook model that many other countries have tried to do, but in no way as successfully as the English Pilgrim Fathers did in the new continent. Although escaping from an oppressive monarchy in England that severely curtailed their liberties, the invaders rapidly made their mark by unleashing the first recorded genocide in history – of the indigenous Americans or the First People as they are called now, in a politically-correct terminology. H L Mencken put it so well when he described the English settlers going down on their knees to pray when they reached land after their long ocean voyage. Soon after, he wrote cryptically, they went down on the Red Indians.

There is a humongous difference in scale here between what the local zamindars in India used to do and what the English managed in America and in India – expropriating a continent and a sub-continent respectively. Historian Goldthwaite puts it succinctly – America is one of the finest countries anyone ever stole.

For the first three hundred odd years, the white Americans ravaged, murdered, pillaged and eventually enslaved an entire people and nation. Then they committed further horrors by transporting hundreds of thousands of slaves from Africa to the new country. In this tragic episode, they were merrily assisted and abetted by Arab traders, an interesting chapter of history that has a contemporary link. The white American treatment of the Afro-Americans for two hundred odd years is a blot on the human race that has scarred millions of people.

As with many social-historical sagas, the American one has a dichotomy.The same white Americans who committed abysmal crimes also wrote the American Constitution and the Declaration of Independence that are core components of the globe’s patrimony. The point being made here is that America is a mixed bag; as Jerome K Jerome remarked, it is not the ordinary American who is a problem, it is the ideal American.

During the last 150 years, this massive country, with its large population and humongous natural resources has become the sole surviving superpower on the planet. Even before this happened, the USA was a force to be reckoned with. Arnold Toynbee wrote in the late 1940s that “America is a large, friendly dog in a very small room. Every time it wags its tail, it knocks over a chair.”

The evolution of America as a nation-state and society after its independence must be briefly covered, since it is germane to recent events. The French scholar and savant Tocqueville traversed the same path in 1835 as many of us in the second decade of the twenty-first century are attempting to do. As he zeroed in on why republican representative democracy succeeded in the US, even as it failed in so many other countries, Tocqueville also underlined the critical shortcomings in the American model. He raised a red flag about democracy degenerating into “soft despotism” and also warned about the possible emergence of “a tyranny of the majority”.

Noting the rise of the industrial sector in the American economy, Tocqueville correctly predicted that an industrial aristocracy would rise from the ownership of labour. His prophetic warning was that “friends of democracy must keep an anxious eye peeled in this direction at all times”, since the industrial route was the gate by which a newfound wealthy class might potentially dominate. Even more presciently, he foresaw the alienation and isolation that many have come to experience in modern life.

Finally, we have to acknowledge his insightful assessment spelt out in the so-called Tocqueville effect which can be summarised as follows : “Social frustration increases as social conditions improve”. Growing hatred of social privilege, even when social conditions are improving, leads to alienation and isolation of certain groups and categories in modern capitalist societies. Paradoxically, in an avowedly anti-socialist national ethos, the Tocqueville effect can even lead to the state concentrating more power to itself.

This is a remarkably perceptive and accurate assessment of present conditions in the US. The so-called Trump effect has been in the offing for the last 20 years or so, with the groundswell of resentment increasing continuously. The debate about “Main Street versus Wall Street” during the “Occupy Wall Street” movement a few years ago focused exactly on these issues. In this socio-economic canvas, the other critical element was the drastic de-industrialisation that has devastated many parts of the country. Regions that were once prosperous and thriving have been reduced to a “rust belt”.

All this was aggravated by the fact that the world’s richest country had resolutely refused for more than a century to create for itself a social-security system worth the name or a workable medical and health coverage framework. The US had become ripe territory for a Bernie Sanders or a Trump. The Democratic power-brokers made sure that Sanders was eventually sidelined by Clinton, but Donald’s deep-pockets ensured that he lasted the course and eventually carried the day. The numbers spoke for him and would also have spoken for Sanders, but that is another story.

This is the background against which we have to make realistic assessments about the stand that the new occupant of the Oval Office and his cabinet/team will take with India. America has fundamental interests that Trump will never compromise. Add to this are the core values and interests of Trumps”s support base that are equally beyond review.

Yes, on the dangers posed by Islamic fundamentalism, Trump is much more kosher than Clinton and the Bush gang. On certain matters, therefore, Washington will be more empathetic, if our western neighbour unleashes its terror agenda on us on the scale of 26/11, the Parliament attack or the Uri outrage. Certainly, this writer does not foresee a replication of the disgraceful behaviour of the Obama administration when it refused to hand over David Headley to the Indian authorities.

However, I do not believe that Trump’s campaign gestures of reaching out to the Indian community (forget the “Hindu-Indian” mix-up) amount to much. In any case, the Indian-Americans, who number 3.2. million (just about 1 percent of the US million) do not have the same clout that other ethnic groups have. This is despite the fact that Indian-Americans are by, far, the best endowed in terms of critical parameters like education levels, family income etc.

The major issue that worries me is that Trump will have to contend with deep-rooted institutional prejudices against India in the State Department and the Pentagon. Yes, unlike what many analysts believe, institutional memories do exist. Here, Pakistan has a head-start on us. For generations, Islamabad has assiduously cultivated American babus and generals, and their cumulative influence will not go away. The positive side for us is that Trump, being an outsider, may just have the chutzpah to over-ride the biases of the Washington elite. On this score, he will be a better bet for us, any day, than the likes of Hillary Clinton. The last I saw is that the man certainly does not have the likes of Huma Abedin in his inner circle.

To wrap up, India should be prepared to deal with the likely irrationalities in the Trump Administration with patience and understanding. Our Prime Minister will be our most effective instrument; both Narendra Modi and Donald Trump are quintessential outsiders. Though there are many differences that separate them, their commonalities are equally obvious.

If Raisina Hill fine-tunes its world-view and develops rational expectations from the Trump administration, based on a nuanced assessment of America and its society, then the path ahead can be relatively smooth. Any hype will lead to disaster. Are we, as a country, people, and society, jumping the gun when we comfortably predict a certain pattern of Indo-American relations when Donald Trump assumes office and settles down to governing?