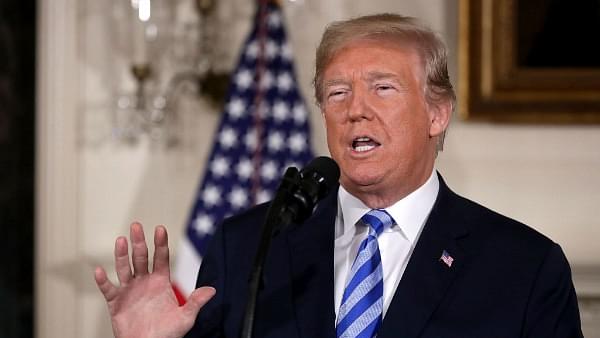 US President Donald Trump announces his decision to withdraw the United States from the 2015 Iran nuclear deal in the Diplomatic Room at the White House. (Chip Somodevilla/Getty Images)

United States (US) President Donald Trump, in his usual style, has kept another campaign promise. He has withdrawn from the nuclear deal between Iran, the permanent members of the United Nations (UN) Security Council, the European Union, and Germany. There have been dire predictions that the decision, announced on 8 May, will take the world closer to war, undermine regional security, worsen the already bad relationship with Russia and the fragile one with China, and so on. All true. A “no-brainer”, as Trump himself might say.

However, the US President’s withdrawal from The Joint Comprehensive Plan of Action (JCPOA), as the agreement is called, has wider ramifications that might not immediately appear obvious. What Trump has done signals, in this writer’s opinion at least, the final rupture of the enduring US-European post-Second World War security fabric that enabled stability and growth across the continent, and to some extent in Asia as well.

Although largely unnoticed, the first pull on the stitches that held this security blanket together was the American decision to unilaterally withdraw from the Anti-Ballistic Missile Treaty (ABM) on 13 June 2002. Since then, it has unravelled, willy nilly, through a growing distance between the US and its European partners on everything from their general worldviews to the question of how to deal with Russia, climate change, trade, Brexit, Turkey, and of course, Iran.

The JCPOA had appeared, when it was signed in 2015, to signal the possible reversal of that trend. Trump has just undone that hope, which was misplaced in any case, and in fact will almost certainly speed up the pace at which the distance between the US and Europe increases. This is not a process any other power pole in the world will be particularly unhappy about, as it will increase their own strategic autonomy and space. Nor will they be especially happy about it, considering that all it does is increase the tactical variables and strategic uncertainty in a geo-politically fragmenting world.

The move will have a direct and painful impact on European economies, with jobs under threat in a continent already on the ropes because of political punches ranging from refugee absorption to disillusioned public opinions that are shifting steadily and inexorably rightward. The Iranian order of a 100 Airbuses is already being highlighted as one of the deals likely to collapse. Tens of thousands of jobs are on the line and possibly more if the full pan-European impact on this and other deals is tallied up.

This is not a pretty picture. While American companies have been affected too (Boeing, for one, which also has a deal with Iran), this is cold comfort for EU politicians who do not share Trump’s popularity in their local hustings. Public opinion in Europe is drifting away from the US.

In a Pew survey released in June 2017, only four out of 10 EU members had a positive view of the US. Of these four, even Britain (of “special relationship” fame) just scraped through with exactly 50 per cent giving a favourable rating. The others were Poland, Hungary, and Italy – I’ll let the reader guess why that might be so.

A sentence for Britain, already reeling from the present and potential uncertainties of Brexit and a sense of irrelevance in the global debate on just about anything, which will now find itself torn even more between the coat-tails of Uncle Sam and (for now) Auntie Merkel. Expect, therefore, much more “nuisance value” activity in the UN from the old colonialists, France and the United Kingdom, not necessarily on the same side.

For the non-signatories – the rest of the world including Latin America, Asia (other than China), US withdrawal from JCPOA does not change much except that they will revert to an era when they ignored the sanctions that the US imposed when possible, circumvented it when they had to, and observed them when there was no other choice. The only difference is that, in the present circumstances, there will be virtually zero sympathy for the US position.

What Trump has done in this case will not help the US gain anything. Certainly not more security, and definitely no improvement in global status for all those things that the US has been preaching for decades – capitalism, free markets, and democracy. But then again, he has just stabilised the Korean peninsula (or so it seems) and imposed hard tariffs on Chinese imports – a move that is in truth good for everyone, at least as an example of how to deal with predatory trading practices. So yes, the world needs to prepare for a second Trump presidential term. And almost certainly there is more disruption ahead.

Still, the move to withdraw from JCPOA is only good for Trump, not for America. It has the feel of a private favour being returned. And, as such, it should detract from his standing among his loyal supporters. But the majority of them will not see it for what it almost certainly is, and those who do will quietly internalise it. His supporters will continue to believe his “say it like it is” political incorrectness, which has become synonymous with honesty. And Trump will continue to try and make America great again.