Trump-Kim Summit: Who Is Pulling The Strings In This Curious Korean Drama? 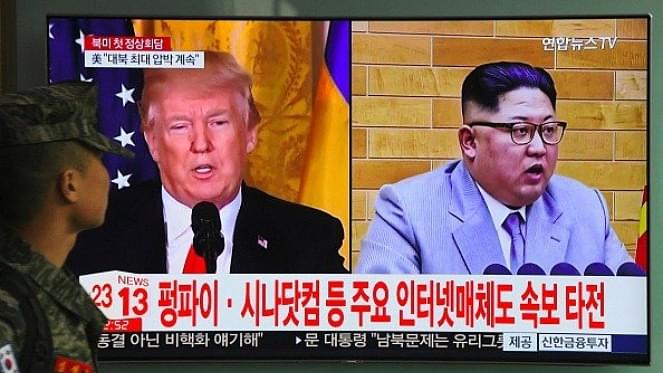 On 12 June, a businessman-president of a receding superpower and a monarch of a relatively isolated nation will meet. Promising a special moment for world peace, Donald Trump will be walking a path no United States (US) President has walked before.

Singapore, which hosts embassies of both North Korea and the US, has a history of hosting high-level diplomatic encounters, including that of China’s Xi Jinping and Taiwan’s Ma Ying-jeou in 2015. With the essential security apparatus in place, assurance of secrecy, and warm relations between the two nations, the state is an apt choice for this important summit.

For Kim Jong-un, the meeting presents an opportunity to free his nation of the isolation he inherited, and give his citizens a hope for a better life. With both countries harbouring enough nuclear capacity to cause significant damage to the other, the summit is key as it could possibly lead to peace between the two, at least temporarily.

The last few weeks have been quite busy for Jong-un. Starting with his secret trip to China in late March, the first such trip outside North Korea since he took power, the supreme leader has met South Korean President Moon Jae-in, becoming the first leader of his nation to cross over to the Demilitarized Zone since the Korean War in the 1950s. Earlier this week, Jinping hosted Jong-un again for a mystery meeting in Dalian, a city easily accessible from North Korea through the railways.

These dialogues are being seen as the North Korean leader’s attempt to enhance his credibility. Given how the Chinese sanctions were defied repeatedly by North Korea to conduct nuclear and missile tests, creating a tense situation in the peninsula, the two summits with Jinping provided Jong-un the much-needed opportunity for course correction with its biggest trading partner and most reliable ally, China.

Jong-un also seems eager to start afresh with South Korea. Mutually agreeing to rid their peninsula of nuclear weapons, Jong-un and Jae-in have offered their citizens the hope of a peninsula not burdened by the threat of war. In addition, Jong-un’s presence at concerts where South Korean artists performed is seen as a step towards cultivating a thriving social-cultural exchange between the two Koreas, separated by decades of prosperity at one end and destitution on the other.

While the Panmunjom Declaration doesn’t offer a clear path to a nuclear-free Korean Peninsula, it does offer the assurance that the two states will be open to a peace resolution. This is critical for China, for it sees its rise as the regional superpower in the Pacific inevitable in the near-future. A nuclear-free Korean peninsula not only keeps Japan at bay from harnessing its nuclear potential, it also strengthens China’s position as the biggest power-broker in the region.

From comparing the size of their nuclear buttons to now agreeing to sit together for a chat, Trump and Jong-un have made giant diplomatic leaps in little time. Earlier this week, US Secretary of State Mike Pompeo returned with three American prisoners from North Korea who were detained there for more than a year, signaling a possible improvement of ties between the two nations. While the media was quick in its hysteria to credit Trump for the progress, with some digging it is possible to see who is pulling the strings in this Korean drama.

For the Chinese, it is about balancing a nation looking to go rogue with nuclear weapons and a superpower indispensable to their trade interests. Even though it has been entangled with the US in tariff wars over the past few weeks, it knows that the US cannot hope to curtail North Korea without Chinese cooperation. For all we know, the Chinese could trade a gradually denuclearised North Korea for trade deficit with the US. Besides, the growing protectionism in the US has enabled the Chinese to take a lead in facilitating diplomatic engagements with North Korea.

The buck doesn’t stop at the US alone. Last year, China imposed unofficial trade sanctions against a few South Korean companies when the latter installed the Terminal High Altitude Area Defense system to combat the missile tests of their volatile neighbours. For China to assert itself as the lone regional superpower, sans US interference, in the future, it must find itself on the same page as South Korea.

With the South China Sea set to be a bone of contention between China and the US, China would be wary of American presence on the South Korean side. If at all the Chinese are able to push Jong-un towards gradual denuclearisation in the next few years, they would not only assure themselves of a peaceful backyard, vital to their trade interests as well as Russia’s, but also force the Americans to cut down on their strength in South Korea.

For Jinping, who recently consolidated power and who aims to usher a new age in Chinese leadership across the world, this Korean drama offers the right opportunity to showcase how his nation is ready to assume global leadership as America appears to withdraw from the high seat on the global stage.

In the last few weeks, Jong-un has been made to do some heavy-lifting. From the Panmunjom Declaration to releasing US detainees, Jong-un’s actions warrant surprise and scepticism. For a leader who was threatening to go to war just months ago to now embracing diplomatic routes, an external influence – in this case, the Chinese – cannot be denied.

Trump has threatened to walk out of the summit with North Korea if the negotiations break down. However, the days of the US calling the shots are long gone. If North Korea agrees to give up its nuclear weapons or freeze nuclear development instantly, China will earn itself a peaceful backyard, increased regional authority, and respect across the globe for getting Jong-un to sit across the table and talk. However, if the North Korean leader refuses to steer from his path, Trump or the next future president of the US would find it hard to impose meaningful economic sanctions, implement military options, or find a permanent solution to their Korean dilemma without Chinese assistance.

This is the first in a multi-part series of articles on the Trump-Kim summit in Singapore next month.