Trump’s Middle East Policy Will Be More About Israel, Iran And Islam 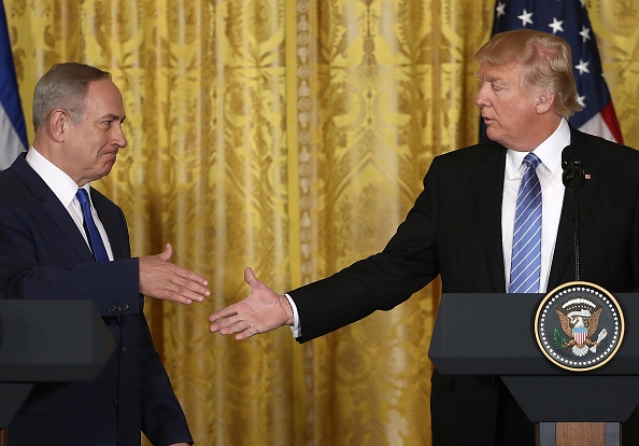 These days, the description “Middle East” for the geographic space between Iran and Morocco has a strangely outdated ring to it. The world around has changed dramatically, although it might appear that the Middle East has remained the same – fractious, warring, sectarian, unpredictable and going downhill fast on the Arab-Israeli relationship front. In other words, the same old mess, nothing new to report.

Is this perception accurate? It is not. Decades old allegiances, fickle though they might have been, are now in tatters. There is no love lost between virtually any two Arab countries that you can name, and equally little between most Arab countries and Iran. Suspicion and conspiracy theory is rife. Sunni-Shia sectarianism is probably at its worst in living memory and is not likely to recede. And let us not forget the full-fledged civil wars underway in Syria, Libya and Iraq. Then there is Yemen, being devastated by Saudi airpower almost as a sideshow.

US President Donald Trump waded into this swamp early on, during his election campaign, and broadly laid out his priorities: Israel, Iran and Islam – not necessarily in any particular order. It is likely that he will stay true to his word. Here’s what we can broadly expect:

After his term is over, whenever and however that happens, Trump will be remembered as one of the US leaders friendliest to Israel. That is saying a lot. The relief in Israel on the departure of Barack Obama is palpable, and no one can blame them for that. The former president had little time for Israel, or for its Prime Minister Benjamin Netanyahu. On the other hand, he was welcomed warmly in Washington recently by Trump. All indications are that the relationship will be strengthened and consolidated in the years ahead. Rightly so. The weakening of this relationship does no good to either country.

Israel’s circumstances have also changed. Its once celebrated relationship with Turkey is now much more guarded. The undeclared, yet, evident commonality of interest with most Gulf Co-operation Council (GCC) states is now a little more in the open, just as their relationship with Iran has soured to curdling. Some might see in Trump’s choice to exclude Saudi Arabia in his travel ban list (but to include Iran) a nod towards this commonality. It can be expected that, in turn, Saudi Arabia and other Gulf states will not be especially loud when Trump makes a game changing move in favour of Israel, perhaps by moving the US Embassy to Jerusalem or some other powerfully meaningful gesture.

This is where Trump’s ability for diplomacy and the securing of American interest will truly be tested. If there is one thing Obama did right in foreign policy during his presidency (and there was more than one), the normalising of the relationship with Iran was central among them. This is something that can only be in the American interest, from virtually every point of view.

Opening up to Iran allows the US to engage with a key regional power which has access to the Straits of Hormuz, which has a stable if rather abrasive political system, and which has had no real problem in dealing with any of the major powers, or the minor ones. Certainly the sanctions did have a negative effect on Iran, but only in terms of enabling a certain hard line on the US from the Tehran leadership, not in weakening their fundamental resolve on the nuclear question. And now, it is not quite as easy for the Tehran leadership to deride the Great Satan either. Public opinion, though fickle, is rarely fooled for long.

It is one thing to ignore the Islamic State-related shenanigans of some of the GCC states, but quite another to compound it by undoing the rapprochement with Tehran. However, this writer believes Trump is not likely to reverse what Obama has achieved with Iran. He will remain belligerent in verbal terms, and so will his lieutenants, but not much concrete anti-Iran action is to be expected. It is neither practical nor useful for the US, at a time when its own credibility in the Sunni world is at rock-bottom. Nor is it wise for Washington to cede the ground in Iran – from an economic or geo-political perspective – wholly to Russia, China and the major European states. Not in the world that is unfolding.

This is the area where the world will see Trump in full flow. He has not been particularly enthused by the nuances that are said to form the boundaries between “Islam”, “Islamism”, “radical Islam”, “Islamists”, “terrorists”, etc. He basically uses whatever term comes to mind at any given time, and the Americans that voted for him seem to recognise that he basically means “Muslims”. The US military does not appear particularly uncomfortable with it either. Considering they will be on the coal-face of implementing Trump’s policies, the Islamic world can expect more churn during the time that he is president.

Here, however, is the key: we can anticipate much more focused and specific policies. For instance, on Syria, expect significant co-ordination with the Russians (whether explicit or implicit) on taking down the IS – or any other radical group. Will there be exceptions? Yes, some of the lunatics favoured (for whatever reason) by the parties involved will remain untouched on a tactical basis. But only on a tactical basis. We will see a lot of the regional Sunni Arab support for multiple formations of anti-Assad fighters – i.e. Qatari, Saudi, etc. – beginning to wither away. In return, or in anticipation, Trump will maintain cordial relations with the Gulf Arab states – again, another quiet nod to the undeclared but undisputed commonality of interests between these Gulf states and Israel.

Under Trump, there should be no expectation of any articulation of grand strategy. There will be no visible major initiatives, nor will there be any grand departures. What there will be is tactical action that might well, in the end, accrete into something that resembles a departure from the post-Cold War era into something new. That new America will be more aloof, more mercantilist, certainly less interventionist and definitely even less accommodating than it is today – at least to the concerns of the countries in the Middle East. In short, an America, that will sermonise less and compromise less.

There will be no regime change initiatives but terror attacks on the US will be met with a response that pays little heed to anything more than pure punishment. American grand strategy, to the extent that it can be discerned in the Middle East, will be ridden over roughshod for tactical gain and political mileage. The Middle East should prepare for a US under Trump that is much redder in tooth and claw.