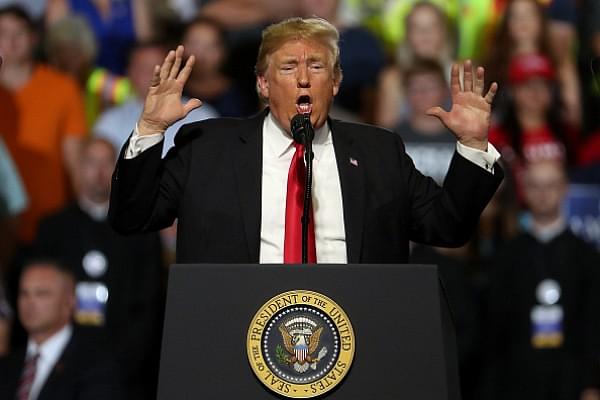 “...or you will suffer consequences the likes of which few throughout history have ever suffered before (all in caps).” –  United States (US) President Donald Trump on Twitter, responding to Iran’s President Hassan Rouhani.

If there is anyone who should claim credit for the hundred per cent increase in Twitter’s stock price over the last one year, it should be the President of the United States, Donald J Trump, for who could have imagined the 280-character platform being used to threaten a nation with a nuclear war.

Addressing some diplomats in Tehran earlier this week, Iran’s President Hassan Rouhani warned the US, saying that a war with Iran would be the mother of all wars. Responding to his Iranian counterpart on Twitter, Trump took an approach that was last witnessed earlier this year in his one-sided Twitter exchange with North Korea’s Chairman Kim Jong-un.

Even before the emergence of globalisation in the second half of the 20th century, the role of US President was centred around foreign policy. With Congress taking care of its constituencies, the occupants of the Oval Office spent a lot of time of their presidency catering to affairs outside the country.

President Franklin D Roosevelt found his presidency defined by his actions during the Second World War, even though he led the country away from the Great Depression of 1929-30, ascending to power in 1933. President Jimmy Carter found his presidency ruined by US’ misadventures in Iran. His successor, president Ronald Reagan will be remembered for being the disruptor, who took on Union of Soviet Socialist Republics (USSR). President George W Bush will be remembered in history for his miscalculated assault on Iraq, while the consequences of president Barack Obama’s hurried exit from Iraq are being witnessed across Iraq, Syria, and some European states even today.

Thus, it does not come as a surprise that Trump wants to do everything right on the foreign policy front. However, in his pursuit of ‘Make America Great Again’, Trump might end up doing more harm than good.

Firstly, Trump’s disregard for multi-nation alliances and treaties is an open secret. Within days of him taking the Oval Office, the US exited the Paris Climate Agreement and the Trans-Pacific Partnership. Calling the North Atlantic Treaty Organisation (NATO) obsolete, Trump blamed Germany for being under Russia’s influence, given the former is looking to import gas at a cheaper price. German Chancellor Angela Merkel has publicly stated that Europe cannot rely on the US anymore to impose the world order, thus signalling a shift in the European Union’s diplomatic approach. On the North Atlantic Free Trade Agreement (NAFTA), progress between Canada, US and Mexico has been excruciatingly slow, further constrained by the issue of illegal immigration. US' trade war in China, if left unhindered, could spell doom for world economy by pushing the Chinese economy in a debt trap.

There are certain merits to Trump’s foreign policy as well. Last week, meeting Russian President Vladimir Putin in Helsinki, Finland, Trump emphasised on issues where both the countries could work together. Even though his gesture for peace was not received by critics and opinion-shapers in the US, the prospect of Trump and Putin working together may enable the end of the Syrian crisis, and perhaps, the one in Yemen. Putin is scheduled to visit the White House later this year to take the discussions forward.

After a rough start with North Korea that involved comparing the size of nuclear buttons, progress has been made. While earlier presidents relied on dialogue alone, Trump has chosen an unconventional path. Becoming the first active US President to meet a North Korean dictator, he has been active in pursuing the denuclearisation of the Korean peninsula. While it might take years before Kim Jong-un gets rid of his nuclear weapons, Trump shall go down in history as the president to roll out the process, if success is achieved.

What Trump does not realise is that any chances of success with North Korea will directly depend on how he tackles Iran. Already, a blunder has been committed in the form of a walkout from the Joint Comprehensive Plan of Action (JCPOA) by the US, cheered on by Iran’s adversaries, Saudi Arabia and Israel. Even if one is to assume that the clauses agreed to within the JCPOA were not to US’ liking, they should have been renegotiated. Staging a walkout sets a dangerous precedent for the future, for it leaves the US without any credibility.

The other signatories to the JCPOA; the EU, France, Germany, Russia and China have reaffirmed their commitments to the Iran nuclear deal, thus alienating the US. Trump’s outlandish approach to the NATO has added to EU’s apprehensions, thus enabling them to stick to the deal. Thus, even if Trump were to go to war against Iran, he wouldn’t have the support of his allies, probably not even one.

However, there are some takers for Trump’s Twitter theatrics. Threatening North Korea with a war, an offer they could not ignore, Trump got them to trade, as some critics believe. With Iran too, Trump seems to be employing the same approach. Given Iran is already engaged with Saudi Arabia in a proxy war in Yemen, and has Israel to worry about in its vicinity, Trump would be tempted to exert more pressure via such theatrics to get Iran to talk. Sadly, plenty could go wrong too.

For starters, Trump must realise he cannot make progress in any bilateral arrangement by alienating or dismantling another. For denuclearisation of the Korean peninsula, the deal with Iran would have to be reworked or sustained in its current capacity. The odd-even scheme of peace and war will not do Trump any good. Second, Trump must remain rooted to realities. With domestic debt soaring, any war with Iran would have grave consequences for the American economy and oil prices across the world. Lastly, without the support of the allies, any war with Iran will shackle the US in the Middle East for another decade.

Trump seems to have clearly missed what made America great in the first place. It wasn’t the ability to go to war, but the sincerity to ease the conflicts, as the world witnessed during the Great War and the Second World War. Learning from the Marshall Plan that enabled Europe to get back on its feet after 1945, Trump must realise the importance of working with allies and adversaries for US’ greater good.

With his Twitter theatrics, Trump risks lowering not only his, but also the credibility of the White House. China is a long way from becoming a superpower, and until then, the US must act responsibly to sustain a peaceful world order.