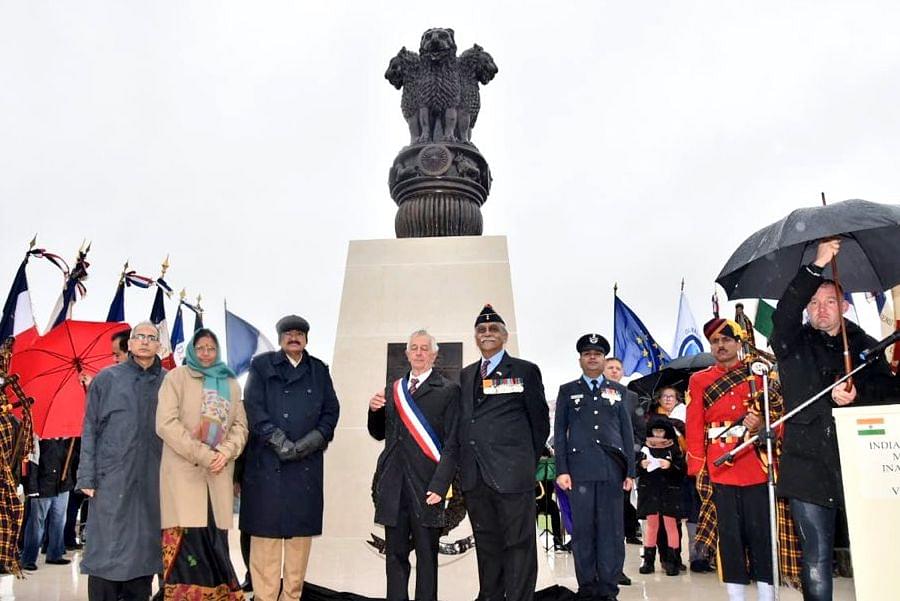 Vice-President Venkaiah Naidu at the inauguration of the memorial. (@VPSecretariat)

In 2014, the centenary of the beginning of the First World War (also known as the Great War) was observed all over the world but most ardently in the UK, France, Australia and India. India wasn't even an independent nation when the Great War began with the assassination of Archduke Franz Ferdinand at Sarajevo. And now it is 11 November 2018, a happier centenary to observe; it marks the end of the Great War on 11 November 1918 with the defeat of Germany and Turkey by the Allied powers. The day is also called Armistice Day.

The main ceremonies are being held in Paris, where the Armistice was signed, with India's Vice-President Venkaiah Naidu attending the event and representing the nation. Many more ceremonies are being conducting in Europe and the UK, in large and small graveyards, where the mortal remains of many a soldier lie buried, killed in the fruitless chase of power by nations which wish to dominate others.

I am writing from Levantie, France, a town near the city of Lille. I am here at the invitation of the mayor of the town to lay wreaths at the memorials and the graveyard, plus inaugurate an Indian Army war memorial, which has just been constructed. The Indian connection with the Great War is insufficiently known to the world and even lesser within India. In 2014, an effort was made by the British High Commission in India and the United Service Institution to highlight India's immense contribution to the Great War and the victory of the Allies over Germany and Turkey. A lesser effort this time, but nevertheless, demands that the centenary of the Armistice of 11 November 1918 be understood in the right spirit and the correct perspective.

The Indian Army's contribution is almost legendary and actually needs to be documented as part of Indian military heritage. But for now we just need to recount briefly how and why the Indian Army is connected to the centenary of an event held thousands of kilometres away from India, and less importantly, why I am at Levantie with my spouse and a few Indian Army friends.

Field-Marshal Sir Claude Auchinleck, Commander-in-Chief of the Indian Army from 1942 was known to have stated that the British "couldn't have come through both wars (the First World War and the Second World War) if they hadn't had the Indian Army”. That is a truism that no British citizen can ever deny. Yet that perception has not been respected in letter and spirit either by Her Majesty's government or by the Government of India, which should have drawn much mileage from it and given its soldiers a befitting recognition. Just in the Great War an army of 250,000 locals (all Indians) in 1914 expanded to such a strength that a total of 1.4 million Indian soldiers served the British crown overseas or in the North West Frontier, where a threat of invasion of India by the German-Turkey combine had built up; 72,000 of them never returned to their homes and even more were injured. The casualties mark a humongous sacrifice considering that the US lost 57,000 soldiers in 12 years of war in Vietnam and in 17 years in Afghanistan has lost just under 5,000.

As war clouds loomed over Europe, Britain was not in a position to stem the offensive of a confident German nation reinforced by its alliance with the Ottomans of Turkey. France too was militarily weak. The 150,000-strong British Expeditionary Force was considered inadequate. The only resource from where troops could be pulled out for Europe was India but the Indian Army was essentially an internal security force to quell rebellion or fight insurgents. It was inadequately trained and equipped for the modern battlefield of 1914, in which the technologies of the industrial revolution prevailed; they had no artillery either.

In August 1914, following the retreat from Mons the British Expeditionary Force to France and Belgium found itself incapable of holding against the German onslaught. That is when an Indian Expeditionary Force from the Indian Army was mustered to reinforce it. Four divisions of the Indian Army sailed to south of France. Two infantry divisions (Meerut and Lahore) and two cavalry divisions formed this force, comprising approximately 28,500 men. The Meerut Division comprised The Garhwal Brigade with the 1st and the 2nd battalions of the regiment and later reinforced with the 2nd Leicestershire Regiment of the British Army. It reached France on 26 September 1914. The Indian Corps, not used to battle under European conditions, suffered heavy casualties in 1914 even as they adjusted to the concept of trench warfare. Pulled out of battle to recuperate temporarily, they were re-inducted in early 1915 when a very tenuous situation had developed.

The Indian Corps was sent back into battle at the beginning of 1915 and took part in the battle of Neuve-Chapelle on 10-12 March 1915. It conquered some terrain against fierce German resistance, but had to withdraw due to insufficient artillery preparation. The Indian Corps took part in other battles: the second battle of Ypres (April 1915), and the battles of Aubers ridge (9 May) and Festubert (15-25 May). Its last intervention was in the battle of Loos (25 September-15 October 1915). At the end of October 1915, it was dissolved, having sustained total casualties of 22,000 (8,000 dead and missing; 14,000 wounded) and, at the end of December, the two infantry divisions (with 30,000 Indian and 4,500 British) left France for Mesopotamia, where they were immediately thrown into battle at Kut-el-Amara. A total of 7,000 cavalry soldiers were left in France, as well as 6,000 auxiliaries.

By November 1918, the Indian Army was being considered the ‘imperial strategic reserve’. It was regularly called upon to deal with incursions and raids on the North West Frontier and to provide garrison forces for the British Empire in Egypt, Singapore and China. A total of seven expeditionary forces were formed and sailed overseas during the Great War. These included the ones for the Sinai and Palestine Campaign, the Suez, Gallipoli, Mesopotamia and East Africa. This is in addition to the troops, who were deployed on the North West Frontier from where a likely German-Turkish threat was envisaged and which remained in battle against the threats from the Afghans. 11 Victoria Crosses (VCs) were won for gallantry, the first going to Sepoy Khudadad Khan of the Baluch Regiment at Hollebeke, Belgium on 31 October 1914. Prior to the war, Indians were eligible only for the award of the Indian Order of Merit (IOM). Naik Darwan Singh of the Royal Garhwal Rifles became the second recipient at the Battle of Festubert but the first to receive the award from the King of England at the battlefield itself.

The war effort by Indian soldiers was appreciated by the British leadership but a degree of reluctance to acknowledge the virtually transformational role Indian troops played in the most alien challenging circumstances seemed to persist; almost as if the empire had been upended by the subjects. The title ‘Royal’ was granted to a few regiments and units for their exemplary performance.

It is generally believed that this contributed in its own way helped in building some thought towards an eventual independence to be granted to India. Although there appears no corroborative evidence towards this, the steady path towards greater self-rule did take shape in the period between the two wars. Despite the huge casualties, the British colonial rulers showed no favour to their India subjects. The All India War Memorial, now known as India Gate, was constructed in 1931 to commemorate the sacrifice by soldiers of the Indian Army during the First World War. It has 82,000 names of Indian and some British soldiers who died fighting for the Empire as part of the Indian Army. A similar memorial for those who sacrificed their lives in the Second World War was never constructed; it perhaps would have if the British had stayed beyond 1947.

Somehow the sacrifice of soldiers hailing from the then British Indian Empire never came to be recognised by India’s rulers after Independence in 1947 on the premise that their sacrifice was for the sustenance of the British Empire and not for the Independence of India. What the post-independence national leadership did not realise is that it inherited a disciplined, apolitical, battle hardened and deeply loyal Indian Army. The process of military professionalisation commenced during the First World War and culminated during the Second World War by when an Indian cadre of army officers had been nurtured. Along with the Indian Civil Service, the Indian Army was an institution, which helped usher in stability right at the beginning of the birth of the new nation. It remained apolitical in the British tradition and continued to follow many of the practices of the British Army. It is, however, to the credit of the national leadership that even as it understood little about the military profession, it allowed the Indian Army to remain grounded in tradition and never insisted on a complete makeover.

Why am I at Levantie? One of my major credentials is the fact that I belong to the Garhwal Rifles, two battalions of which were among the first to land in France and were deployed in battle at Festubert and Neuve Chapelle, where their exemplary valour was on display earning two VCs, Naik Darwan Singh and Rifleman Gabar Singh. The former's unit, the 1st Garwalis, happens to be the unit into which my late father was commissioned during the Second World War. Levantie falls within the deployment areas where the Garhwal Brigade fought, inflicted heavy losses on the Germans and suffered tremendous privations themselves.

In 2017, the mortal remains of two Garhwali soldiers were discovered at Levantie. A ceremony was held to honour them and their colleagues who lie buried in France and Flanders, and also transport the remains to India; it was well attended by representatives of the regiment. The mayor in conjunction with active Indians in France decided to instal a statue at the Levantie memorial to honour all Indian soldiers who fought in France and Flanders.

I am at Levantie at Monsiuer Jean-Philippe Boonaert's invitation. He is the Mayor of Levantie and is according huge honour to the Indian Army. As a former Colonel (Head) of the Garhwal Rifles, I have been honoured with an invite to be the guest of honour at the ceremonies. A wreath laying ceremony is to be followed by the inauguration of an Indian Army memorial at the graveyard. We need many more such memorials all over the world where Indian soldiers lie buried, having fought for an empire but also having contributed to the Indian Army's reputation and Indian military heritage. When I look back the most appropriate verse which comes to mind is from the Bhagawad Gita, enshrined on the Garhwal Rifles memorial. It reads: "Lament not the death of a soldier, for he who dies in battle is respected in heaven".