When Vladimir Putin Dropped Truth Bombs On The West 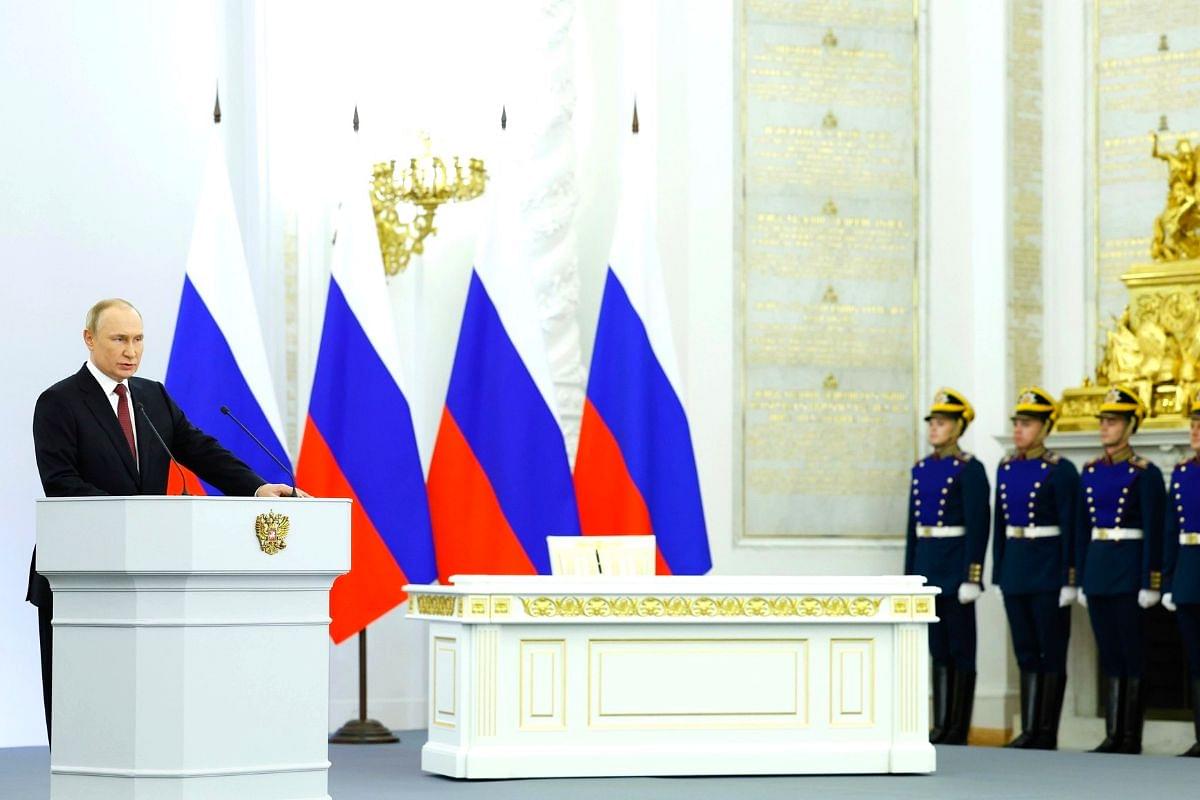 Russian President Putin spoke at a ceremony to mark the formal annexation of Donetsk, Lugansk, Zaporozhye and Kherson region.

Describing his closeness to China, one of the editors of the Financial Times questioned Vladimir Putin’s decision of putting too many eggs in one basket.

To this, the Russian President responded, stating that Moscow had too many eggs but not enough baskets to place these eggs in, citing the obsolete bipolar world order.

The Case For One Russia

In an article Putin authored in July 2021, Putin, in detail, described the shared history of Ukraine and Russia.

Defining them as ‘a single whole’, he called Russia and Ukraine as a part of the same historical and cultural space. Labeling the divisions between the two countries as a great misfortune, he attributed them to the West that had always intended to undermine the unity of the region.

Ukraine was a substitute for an old Russian word that meant periphery, and the word ‘Ukranian’ defined the frontier guards on the external borders, Putin wrote.

In retrospect, one can assume that Putin was making a case for the invasion of Ukraine nine months later.

Elaborating on the united history of the region from the fifteenth century, citing key years, Putin minced no words in dismissing the Ukrainian economic model and how the nation had fallen prey to corrupt leadership.

Putin stated how Ukraine had been dragged into a dangerous geopolitical game, aimed at creating a barrier between Brussels and Moscow, and how Kiev was being deployed as a springboard against Russia.

Nine-months later, following the referendums in the four regions, Putin dropped many truth bombs on the West while addressing the gathering in the Kremlin.

In a televised speech that exceeded thirty minutes, Putin spoke on several aspects of the Russia-Ukraine conflict. For Putin, the ambition is to unite people who by culture, religion, traditions, and language consider themselves part of Russia, their true historical homeland.

The many crimes committed within the four regions were spoken about. In Donbass, the shelling and blockades many citizens had to face after 2014, and how hatred for Russia was sold as a policy by the regime in Kiev, backed by NATO.

Putin, before a thunderous applause, challenged the West, stating unequivocally that the people living in Lugansk, Donetsk, Kherson, and Zaporozhye were now Russians forever. The grand plan that was put into motion in late-February 2022 had been executed with great success.

Beyond the united history, Putin also hailed Russia’s resilience, stating that the West thought that the country would never recover from such shocks and collapse under its own pieces.

This did not come as a surprise, for in several speeches and interactions, Putin has cited the fall of the Soviet Union in 1991 as the tipping point in the region’s history.

However, this was more about calling out the West for their objective to divide and rule a region that is flushed with natural wealth and resources and refuses to do the bidding of the West.

The recitation of West’s political hypocrisy did not stop at Russia, but also transcended the colonial ages of the Eastern Hemisphere.

Going back to the Middle Ages, the speech reminded the West of the slave trade it had engaged in, genocides of the Indian tribes in America, economic plundering carried out in Africa and India, and the opium wars in China.

Putin described how the West, using technology and dollar dominance, was creating vassals of convenience, labeling states as rogue or authoritarian to suit their agenda.

Did The West Overplay Their Gamble In Ukraine

In the context of Ukraine, this is especially true. The NATO expansion, since the 1950s, went against Russian interests.

Thus, for Moscow, which had been promised that NATO would not expand eastward after 1990, the case for Ukraine becoming another member of the alliance was a security threat.

Putin highlighted this aggression from the White House, citing the US’ history in the Second World War where they used atomic bombs against Japan, and how they continue to have a military presence in Germany, South Korea, and Japan.

The deployment of napalm and chemical weapons in Vietnam by the US was also recalled by Putin in his speech.

The aggression of the US must also be viewed in context to the cost that the European nations are paying today.

A full-blown energy crisis has given central banks sleepless nights. For July 2022, the annual per cent change in consumer price index for energy was 36 per cent in Germany, 28.65 per cent in France, 42.96 per cent in Italy, and 57.7 per cent in the UK.

The food inflation in the regions was around 10-12 per cent for the same period, given the disruption in food exports and production from Ukraine. A long winter ahead for Europe.

The End Of The Liberal Idea

The migrant crisis is an important episode to prove the futility of the liberal idea.

Even in his interview in 2019, Putin reserved his criticism against President Donald Trump’s idea of a wall on the American-Mexican border.

On the migrant crisis, his stance was the same for Europe and the US; that a nation’s interests should be priortised over anything else.

In his speech, he cited the migrant crisis that was a result of the irresponsible wars of the West in the Middle East region and how it could weaken the European nations and dilute their character.

The American society was not spared as well.

Putin, in the final minutes of his speech, questioned if their civilisation was wanting to move away from ‘mom and dad’ to ‘parent-1 and parent-2, and parent-3’, and normalise perversions that were leading to degradation and extinction.

Putin’s attack on the collapsing society in America was also a reminder to the observers across the world that the politics and interests of the Eastern Hemisphere must be divorced from the Western bias.

No Longer The Era of Subordination To The West

Beyond the history, and economic, political, and societal consequences, Putin’s idea of the global security architecture is one that is shared by India as well; that of a multipolar world, each catering to its interests and dealing with other power centers and nations on their terms.

Putin may be labeled as the aggressor in the larger picture, but that is no reason to excuse the origins of the provocations that led to the war.

The formal annexation of the four regions as Europe enters a long winter only explains the miscalculations of the West.

In Ukraine, the war may not be over yet, but the era of subordination to the West definitely is, and this is not only Putin’s belief, but that of many economies around the world, including India.